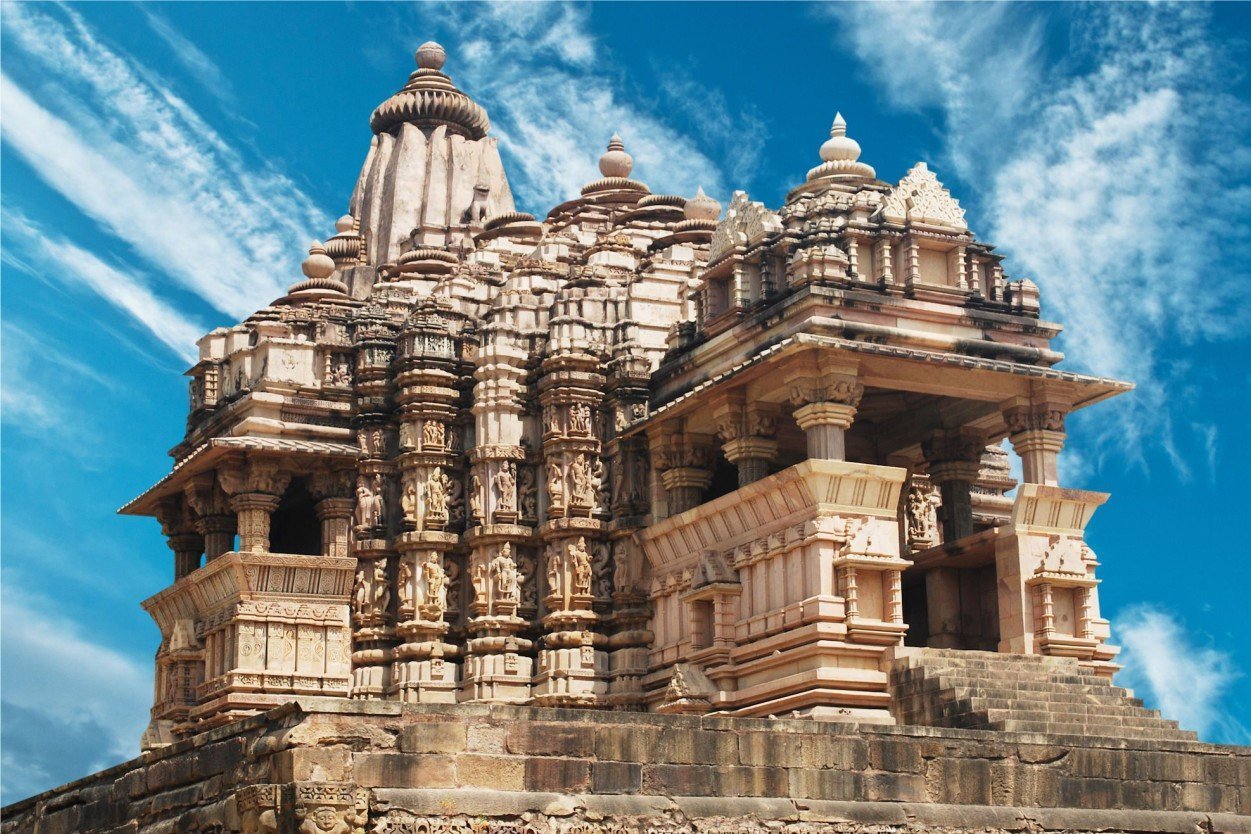 The temples of Khajuraho were built between 950 and 1050 AD during the Chandela dynasty of Central India. In 1838, a British army engineer, Captain T.S. Burt rediscovered them. By that time only 22 of the original 85 temples had survived.

Of the surviving temples, six are dedicated to Shiva, eight to Vishnu and his affinities, one to Ganesha, one to Sun god, three to Jain Tirthankars. For some ruins, there is insufficient evidence to assign the temple to specific deities with confidence.

The viewer has to look closely to find them, or be directed by a guide. The arts cover numerous aspects of human life and values considered important in the Hindu pantheon. Further, the images are arranged in a configuration to express central ideas of Hinduism.

The temples in Khajuraho are broadly divided into three parts: the Eastern group, the Southern Group and the Western group of temples of which the Western group alone has the facility of an audio-guided tour wherein the tourists are guided through the seven-eight temples. There is also an audio guided tour developed by the Archaeological Survey of India which includes a narration of the temple history and architecture.

Kandariya Mahadev Temple (map). This temple is decorated with a profusion of sculptures that are among the greatest masterpieces of Indian art.

Parsvanath Temple (map). Largest among the Eastern group, with exquisite carvings in detail. The sculptures on the northern outer wall are the highlights of this temple. The image was installed in 1860.

The Khajuraho Dance Festival is held every year in February. It features various classical Indian dances set against the backdrop of the Chitragupta or Vishwanath Temples.

Khajuraho Airport is located 5 km from the city. Served by Air India offering flights from Delhi, Varanasi and Mumbai. If one is not prepared for a 5-6 hours bumpy ride from Jhansi to Khajuraho, then plane is the best mode.

RAIL >   A train station was finally opened in Khajuraho in 2008, linking it to Jhansi (Uttar Pradesh) (175 km) on the Delhi-Chennai/Bangalore/Thiruvananthapuram mainline. You can not buy train tickets at the Khajuraho train station. You must go to the bus station, about 1 km walk out of town, to buy train tickets (much cheaper than buying tickets through your hotel).

irctc.co.in >> Railways were introduced in India in 1853, more than one and half a century ago by the British, and today India boasts of the biggest network of railway lines in the world, and the rail system is very efficient, if rarely on schedule. It is one of the safest ways of travel in India. *Rail travel in India