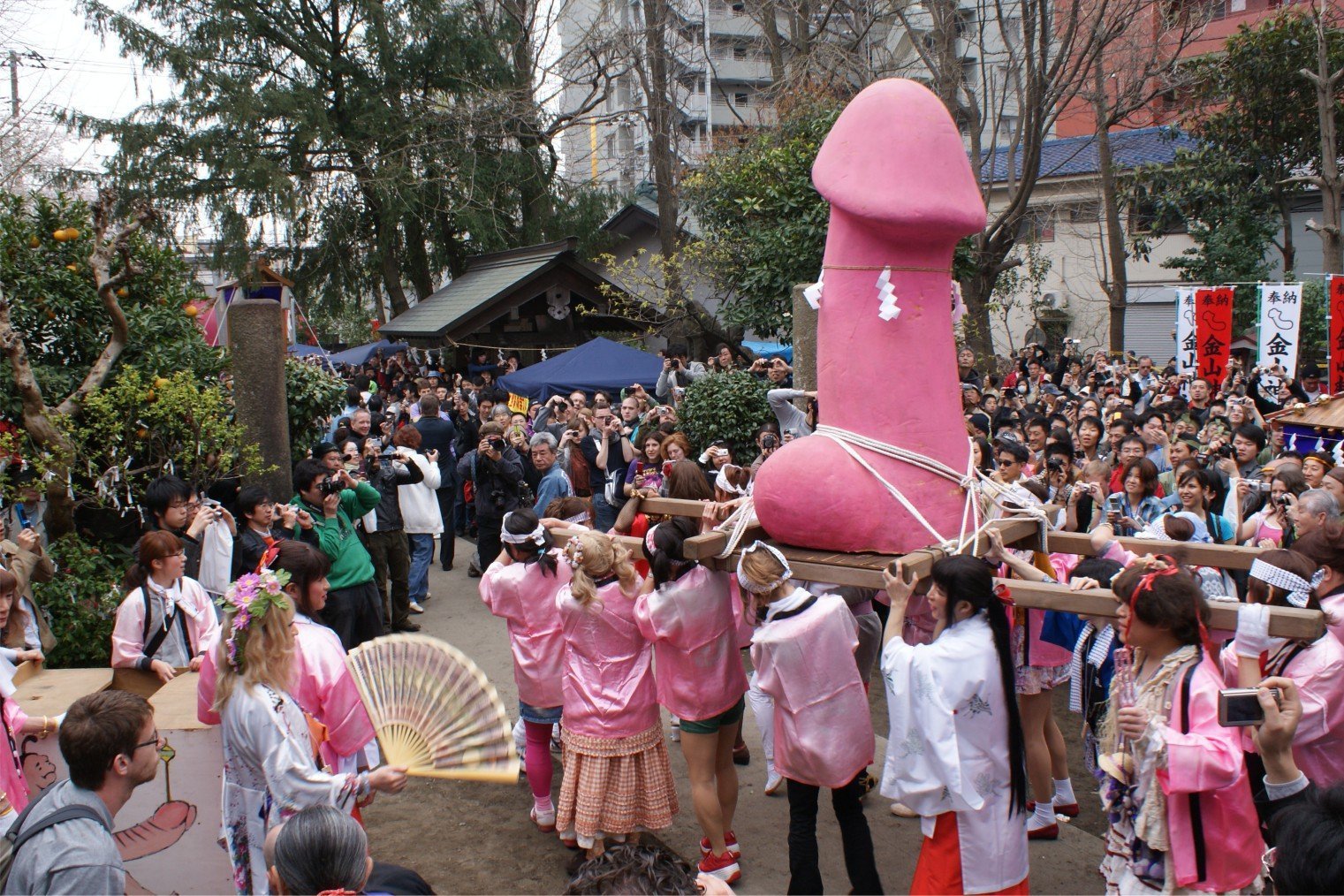 The Shinto Kanamara Matsuri (かなまら祭り, “Festival of the Steel Phallus”) is an annual Japanese festival held each spring at the Kanayama Shrine (金山神社, Kanayama-jinja, map) in *Kawasaki.

The exact dates vary: the main festivities fall on the first Sunday in April. The phallus, as the central theme of the event, is reflected in illustrations, candy, carved vegetables, decorations, and a mikoshi parade.

The Kanamara Matsuri is centered on the Kanayama Shrine where the god Kanayama-hiko and the goddess Kanayama-hime are venerated. They are both gods of blacksmithing, metalsmithing, and metal works, and are also prayed to for easy childbirth, marital harmony, and protection from sexually transmitted infections.

The festival started in 1969. Today, it has become something of a tourist attraction and is used to raise money for HIV research.

In the exhibition hall of Kanayama Shrine, visitors can see a collection of images, objects and books related to other traditions of sexuality. Here you can find out about other festivals in the world dedicated to guardian deities of sexuality besides Kanamara Matsuri.

The highlight of the festival is the parade that starts from 12 o’clock at noon. It features three portable shrines (mikoshi) that carry phallus-shaped sacred objects.

Its origins can be traced back to an ancient Japanese legend. As the story goes, a vicious demon hid inside the vagina of a young woman after falling in love with her. Such was this entity’s jealousy that it proceeded to bite off the penises of two young men on two separate wedding nights. In the aftermath of this grisly ordeal, the woman sought help from a blacksmith who fashioned an iron phallus to break the demon’s teeth, which in turn led to the item’s enshrinement at Kanayama Shrine in Kawasaki.

Once upon a time, but in a land not very far away if you happen to live in Tokyo, there lived a beautiful princess. (Well, actually she was an innkeeper’s daughter, but close enough.) But alas, an evil demon with sharp teeth had taken a liking to her. The demon had courted the girl, but she had stayed pure, and one day the demon learned that the girl was engaged to be married the very next day.

So that night, the demon snuck into her house and crawled right up inside her! Our heroine, terrified but helpless, told no-one and the marriage ceremony went ahead as planned… but on the night of the wedding, when her new husband tried to perform his conjugal duties for the first time, the demon’s sharp teeth went snickety-snack! and the poor man was turned into a eunuch. And the tale tells us that her next husband met the same fate, although the details of how they conned the village idiot into marrying her have not passed down to us.

It was clear that things could not go on like this, and the whole village met to discuss the, shall we say, prickly issue. After extensive deliberations, a candle lit up over the blacksmith’s head: “Why not,” he said, “why not deflower the girl with an iron phallus?”

The metal tool was duly made and tested, and upon chomping down the demon found that it had bitten off more than it could chew; whimpering, it crawled out and slunk off to hide in a dark corner and nurse its broken teeth. The blacksmith married the girl and they all lived happily ever after… except the demon and the two eunuchs, that is.

If you are traveling from the Tokyo or Yokohama area, you should head for Shinagawa Station first. From there, take the Keikyu Main Line to Keikyu Kawasaki Station, then switch to the Keikyu Daishi Line, until you arrive at Kawasaki Daishi Station.

From the station, it is only a one minute walk to Kanayama Shrine. During the festival, you will see crowds of people lining the streets, so it’s very easy to make your way from the station to the event.