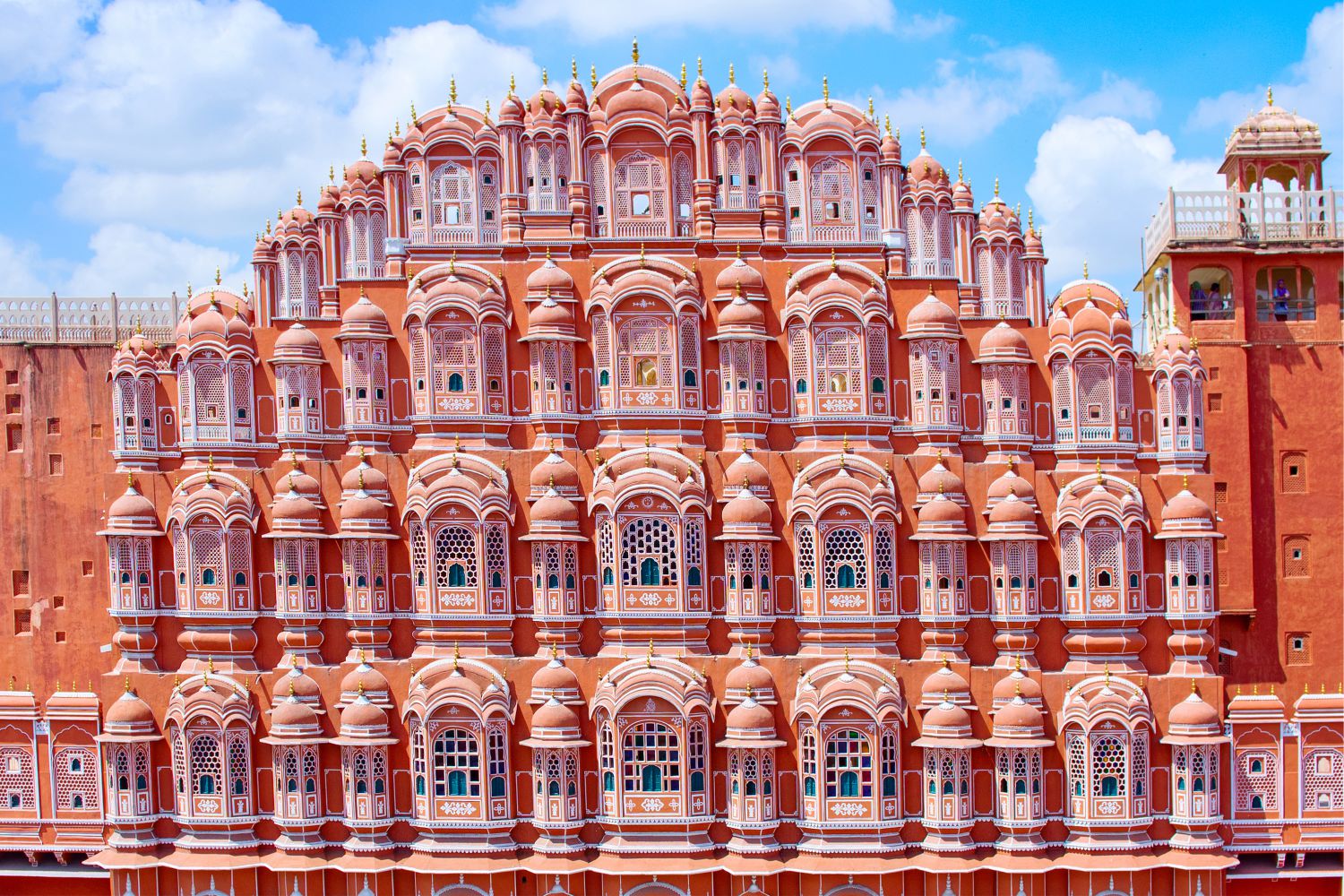 Jaipur (map), also known as the Pink City, is the capital of Indian state of Rajasthan. It is a very picturesque city with splendid palaces, forts and historical monuments and belongs to the tourist Golden Triangle along with Delhi and Agra. It also serves as a stepping stone for those heading to the desert cities of *Jodhpur and *Jaisalmer.

Walking around the old town (Pink City) is certainly a highlight, and should be done on shopping business hours; otherwise, streets can be deserted and it might be a bit unsafe, especially for solo women.

City Palace (map). An imposing blend of traditional Rajput and Mughal architecture. It is a vast palace complex occupying nearly one-seventh of the Pink City. The complex is divided into a series of courtyards, sprawling gardens and buildings. Be warned that although they sell tickets for taking photos with a camera inside, most exhibits inside have a “no photography” sign.

*Hawa Mahal (Palace of Breeze, map). Built in 1799 as part of City Palace, it was an extension of the Zenana (women’s) chamber. Its purpose was to allow royal ladies to observe everyday life in the street below without being seen. It is a five storey high red sandstone structure complete with over 950 windows. The breeze (or hawa in Hindi) circulates through these windows, giving the palace its name. The iconic facade is best seen from the street.

*Albert Hall Museum (map) is the oldest museum of the state and functions as the state museum of Rajasthan.

Winter in Jaipur lasts from October to March. Temperature ranges between 8°-28°. It is the best time to enjoy holidays in Jaipur.

*Amber Fort (map). This massive fort-palace complex built in hybrid Hindu-Muslim style dates back to Raja Man Singh and was the royal palace of the Kachwahas from c. 1600-1727. It’s one of six world heritage forts in Rajasthan. The main sights within the fort include the Sheesh Mahal, adorned with thousands on thousands of mirror tiles on the walls and ceiling.

*Jaigarh Fort (map). Never conquered in battle, this was considered the strongest of the three forts in the area. It is best known as the site of the world’s largest cannon, the Jaivana, which was test-fired only once. A better reason to visit the fort, though, are the scenic gardens at the other end and the spectacular views over the Amber Fort and the hills around.

*Nahargarh Fort (map). The smallest of the three forts, notable primarily for excellent views over Man Sagar lake and the vast sprawl of Jaipur. Built in 1734.

*Birla Mandir (aka The Marble Temple / Lakshmi Narayan Temple, map). This is a relatively new temple made of white marble with beautiful carvings. It covers a vast area in Jaipur city and is built in a contemporary manner. Birla Temple is completely constructed with the finest high-quality white marbles. In addition to having statues and paintings of Hindu deities, the temple has pictures of famous philosophers from around the world including Socrates, Confucius and Zoroaster.

Galtaji (Shree Galta Ji; Monkey Temple, map), 10 km from Jaipur. This temple is an ancient Hindu pilgrimage site. The main temple, Galtaji, is constructed in pink stone. The temple has a number of pavilions with rounded roofs, exquisitely carved pillars and painted walls. The temple is surrounded by natural springs and reservoirs that are considered holy.

Galwar Bagh (The Monkey Temple), Eastern edge of the city (adjacent to Suriya Mandir (aka The Sun Temple, map)). Locals and tourists come here to feed the surprisingly tame monkeys, use the temples, and enjoy the views. At the top of the hill, you turn right to reach the Sun Temple for one of the best views of the city, especially at sunset. Monkey food is available for purchase at the bottom of the hill.

Govind Devji Temple (map). For Vaishnavites, particularly followers of Lord Krishna, this is the most important temple in the world after Vrindavan.

Bapu Bazaar (map) and Nehru bazaar (map). Bapu and Nehru bazaars are for budget and traditional shoppers. They are popular and chaotic bazaars selling many different items ranging from handicrafts to western outfits.

Johari Bazaar (map) – It is one of the frequently visited tourist places in Jaipur which is a shopper’s delight. Tripolia Bazar (map) – The traditional market is well-known among visitors for richly embroidered garments for ladies, traditional wears, marvellous carpets with unusual designs and items produced from iron and brass.

Beyond the standard dangers of travelling in India (thieves, hustlers, touts, questionable drinking water), Jaipur has developed its own set of unique scams. If you are a Westerner and a person outside your hotel accosts you, then it’s likely the person is scheming to acquire your money.

Jaipur Metro provides a fast, reliable and inexpensive way to get around the city.

The journey by car from Delhi to Jaipur takes less than 4 hr. National Highway no. 8 connects Delhi to Jaipur via the industrial township of Gurgaon. The road is excellent.

+ HOW TO GET THERE (tourism.rajasthan.gov.in) / YATRA.COM

BUS >   There is an excellent bus service between Jaipur to Delhi by Rajasthan State Road Transport Corporation (RSRTC) with buses approximately every half an hour in both directions.