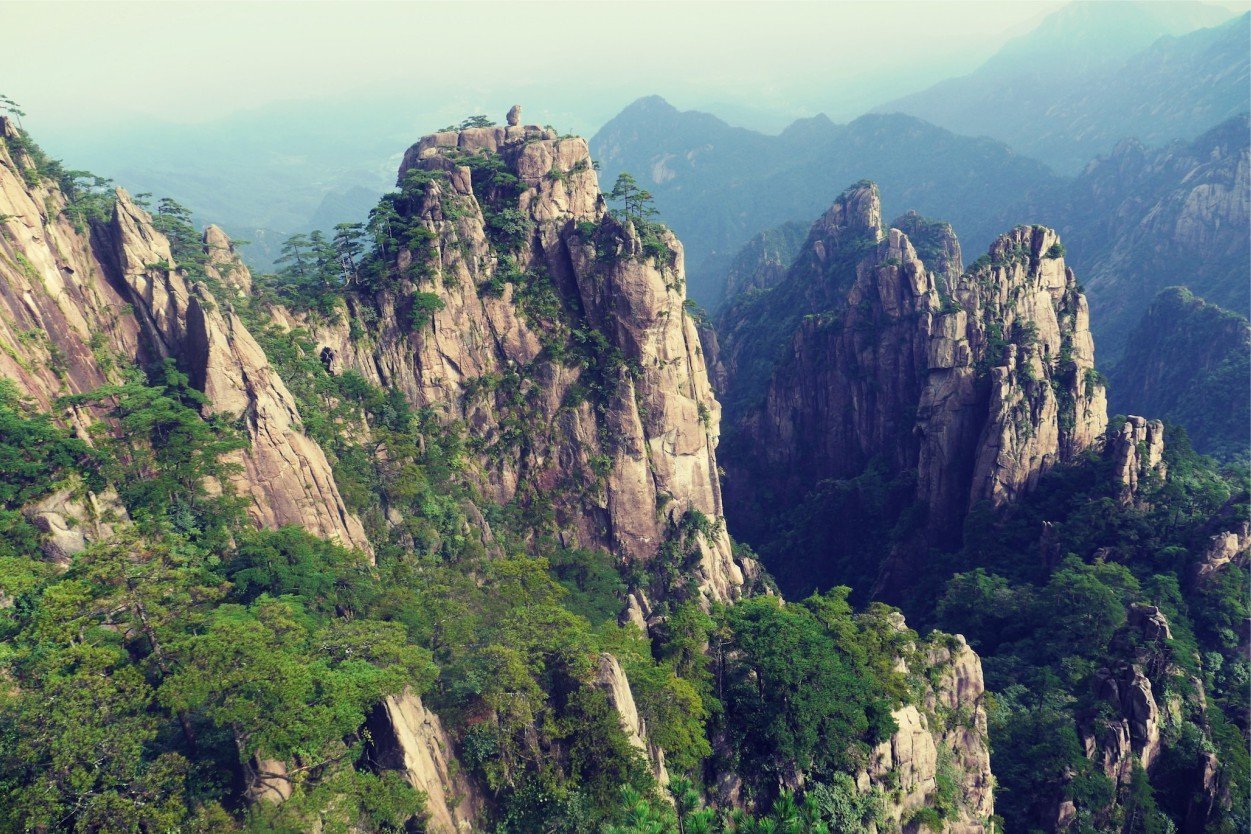 The area is well known for its scenery, sunsets, peculiarly-shaped granite peaks, Huangshan pine trees, hot springs, winter snow and views of the clouds from above. Huangshan is a frequent subject of traditional Chinese paintings and literature, as well as modern photography. It is a UNESCO World Heritage Site and one of China’s major tourist destinations.

The development of walking tracks and cable cars makes this landscape accessible to most active travelers.

Huangshan Mountain is a major tourist destination in China. Huangshan City (map) changed its name from Tunxi (屯溪) in 1987 in order to promote Huangshan tourism. The city is linked by rail and by air to Shanghai, and also is accessible from cities such as Hangzhou, Zhejiang and Wuhu, Anhui. Buses connect Huangshan City to the base of the mountain, where visitors can take a cable car or hike to the summit.

There are more than 50 kilometers of footpaths providing access to scenic areas for visitors and staffers of the facilities. Throughout the area there are hotels and guest houses that accommodate overnight visitors, many of whom hike up the mountains, spend the night at one of the peaks to view the sunrise, and then descend by a different route the next day. The area is classified as a *AAAAA scenic area by the China National Tourism Administration.

The main tourist destination is Huangshan (Yellow Mountain). From the Yuping Cable Car/Mercy Light Temple entrance, the “Western Steps” lead up for about 14 km over spectacular terrain. Allow 6-7 hours for the ascent. If you are fit and have a good head for heights, the steep ascent to Celestial Capital Peak is rewarding. From the Yungu Cable Car parking lot, the ascent by the “Eastern Steps” is easier, taking as little as 2-3 hours.

Remember: a long descent is not that much easier than an ascent. Huangshan is most famous for its sun rise and sea of cloud at dawn. However, all these wonders are subject to weather conditions.

Zhuhai (Buses do not run at night though, so if you want to go after 5PM). Do not miss this nearby gorgeous valley covered with a bamboo forest. Some very nice restaurants and rustic inns you can stay in (preferable to Tunxi).

From the south, the more scenic “western steps” start from Ciguang Pavilion (慈光阁 (Mercy Light Temple), past the Yuping cablecar, while the “eastern steps” start just below the Yungu cablecar. In the north, a trail starts from the base of the Taiping cableway, at the Songgu Forest (松谷禅林) entrance.

The far more obscure but very scenic route from the northwest entrance via the Fairy Bridge starts at the end of a small local road. Highly recommend is the walk through the West Sea, for its stunning scenery. This area is also accessible by a funicular railway from the top.

BUS >   Frequent direct buses run from Shanghai and Hangzhou. The buses from Hangzhou run either to Huangshan City (nearly two hours away) or direct to Tangkou at the mountain’s tourist distribution center.

A coach or bus in rural China is a different experience. City buses vary from city to city. However, if you can understand the bus routes then they are cheap and go almost everywhere.

Huangshan station (黄山站). In the town of Tunxi (Huangshan City), this station serves sleeper trains arriving from many major cities in eastern China. There is an overnight train from Shanghai via Suzhou and Nanjing that takes about 11 hours, which is longer than a direct bus, but it does save a night at a hotel, so it is a popular option.