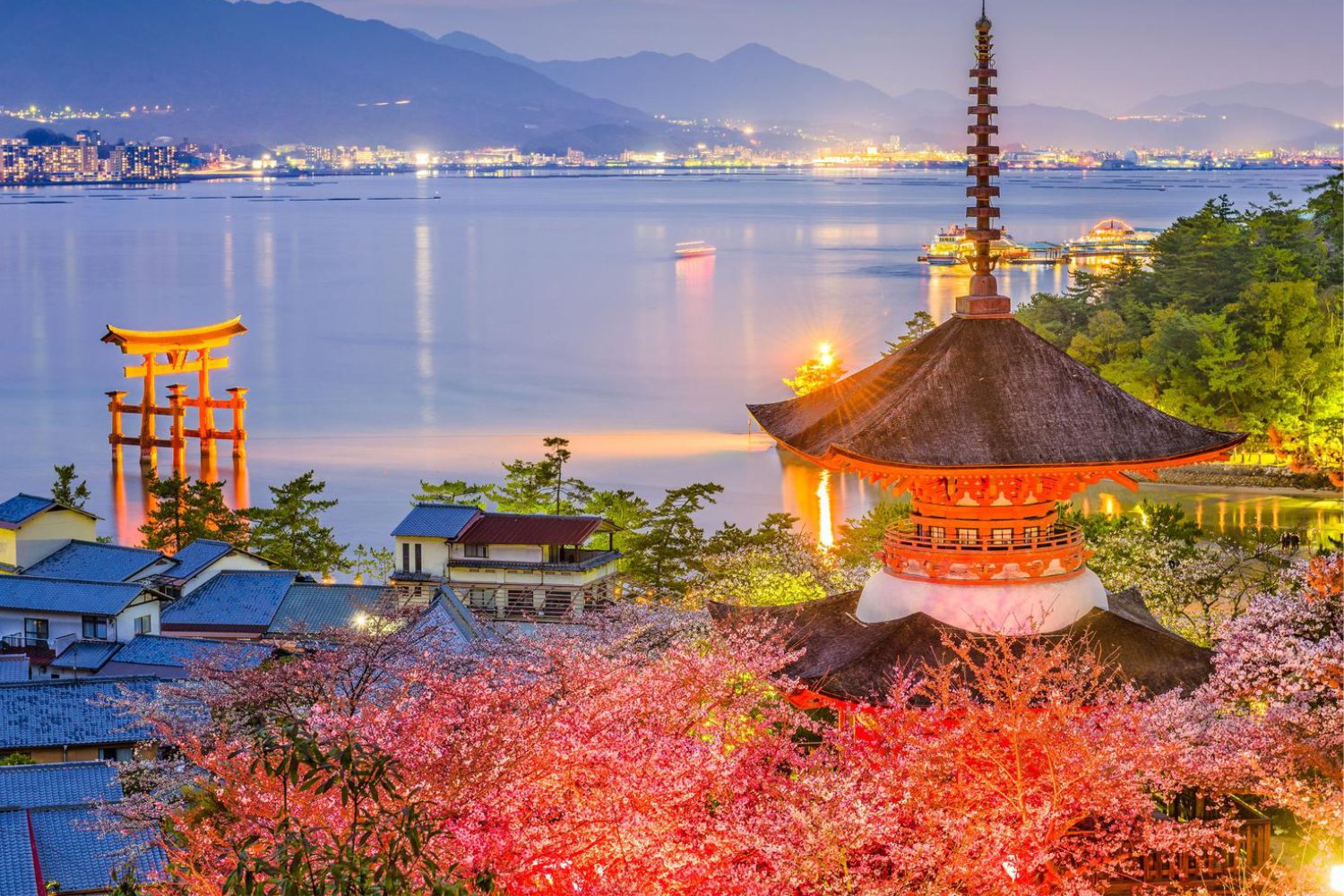 Hiroshima (map) is an industrial city of wide boulevards and criss-crossing rivers along the coast of the Seto Inland Sea.

Hiroshima was the first city targeted by a nuclear weapon. This occurred on August 6, 1945, at 8:15 a.m., when the United States Army Air Forces (USAAF) dropped the atomic bomb “Little Boy” on the city. Most of the city was destroyed, and by the end of the year 90,000–166,000 had died as a result of the blast and its effects.

The Hiroshima Peace Memorial (a UNESCO World Heritage Site, map) serves as a memorial of the bombing. Those expecting to step off the Shinkansen into a pile of smoldering rubble will be in for a surprise, as Hiroshima has all the ferroconcrete and blinking neon of any other modern Japanese city.

Peace Memorial Park (map) Once part of the busy Nakajima merchant district, this area was destroyed almost in its entirety by the bomb. Today, there are more than fifty memorials, statues, and other structures in the Park. Some will be obscure in their meaning; others are immediate and devastating. There is no entry fee, save for the Peace Memorial Museum, and access to the grounds is not restricted at night.

Chuo Park (中央公園, map). A big, sprawling green space in the middle of the city.

Hiroshima Castle (広島城, map). The original Carp Castle (Rijō) was built in the 1590s by Hideyoshi’s warlord Terumoto Mōri, predating the city itself. It was destroyed by the atomic bomb, and reconstructed in 1958. Today, the castle grounds are a nice place for a walk, and definitely Hiroshima’s favorite place for hanami (cherry blossom parties), with more than 350 sakura trees.

Fudoin (不動院, map). Only a short trip east of the city, this 14th century temple is another of the few structures in the area to have survived the atomic blast. The Main Hall is an impressive sight, and both the bell tower and the two-story gate are regarded as cultural treasures.

Mitaki-dera (三瀧寺, map). It was founded in 809 AD. Mitaki-dera is a tranquil, lovely temple to the west of Hiroshima, known for its three waterfalls, which supply the water for the annual Peace Memorial Ceremony, as well as its gorgeous autumn colors and fascinating statues.

Miyajima and its iconic floating torii (Itsukushima Floating Torii Gate, map) are an easy day-trip from Hiroshima — about an hour away by tram or local train to the port of Miyajima-guchi and then a short ferry ride. >> Access to Miyajima

Food Festival. Last weekend in October. This one’s pretty simple — food, glorious food of all kinds, from international delicacies to local favorites, from roasted slabs of meat and seafood to delicious vegetarian-friendly dishes and desserts, served in stalls lining the moat of Hiroshima Castle and parts of Chuo Park. There’s a flea market as well, and usually some cultural performances at the castle in the evening.

October and November are ideal, with less rain and cool, refreshing temperatures. The winter months are fine for a visit — the weather is dry, with very little rain or snow, and the temperatures are rarely cold enough to keep you indoors.

April and May also have excellent weather. The cherry blossoms come out in early April, and the parks around Hiroshima Castle turn into a mob scene with hanami parties. For sakura with a bit more solitude, go for a hike on Ushita-yama, overlooking the north exit of JR Hiroshima Station.

Hiroshima has an extensive tram (streetcar) network, which is operated by Hiroden (広電). It’s a slow but reliable way of getting around.

There are three meipuru-pu bus lines operated under Chugoku JR Bus Company that circulates around the city’s main tourist spots.

RAIL >   Most visitors arrive at JR Hiroshima Station (map), which is a 25 minute walk from the Peace Park. If you arrive by Shinkansen, you will be at the north side of the station. There is an underground pedestrian walkway leading to the main side of the station (south exit), where all other trains arrive. Take the pedway and head upstairs; you will see the taxis, trams, and buses that lead to the city center.