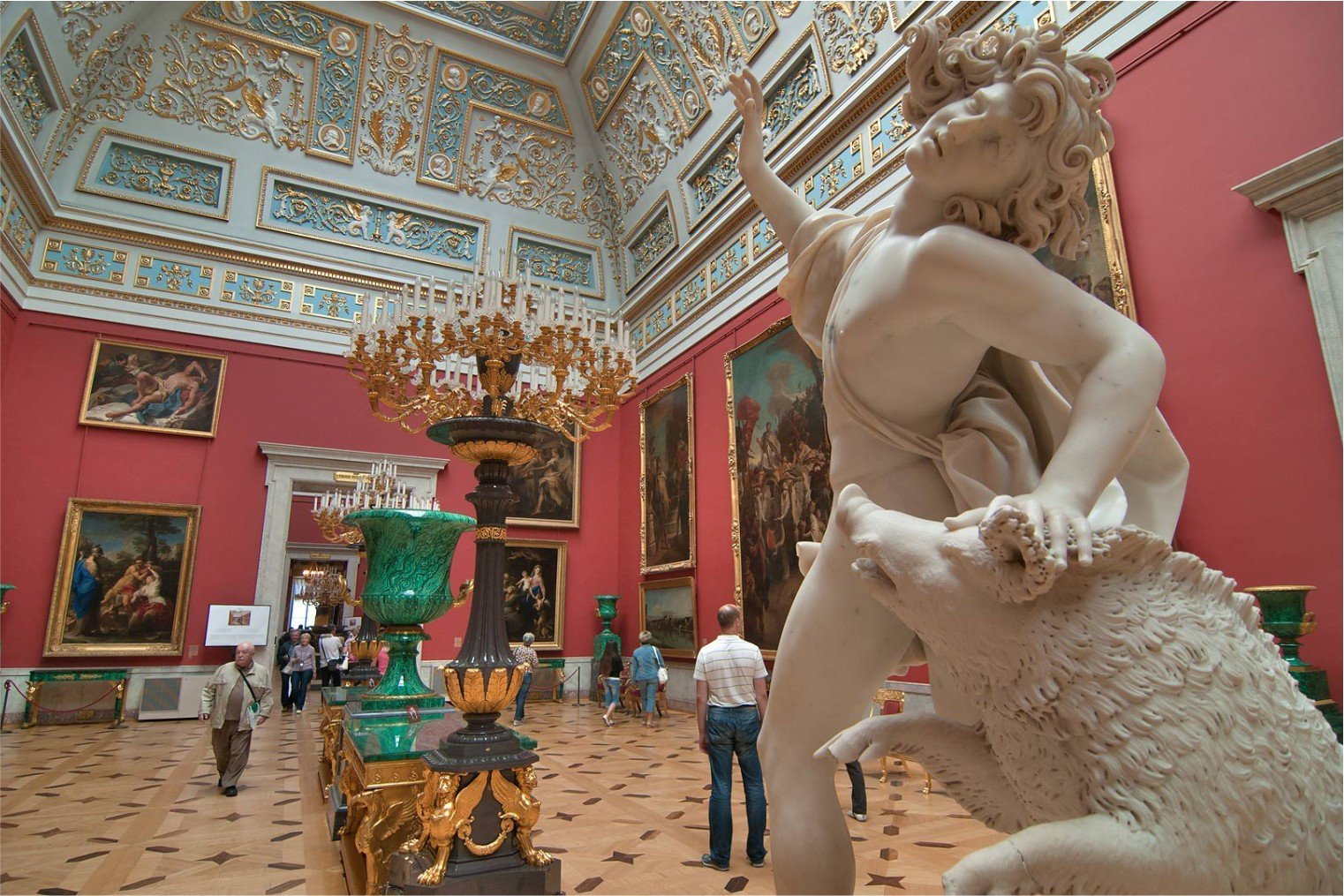 The State Hermitage Museum (map). It is the largest art museum in the world by gallery space. it was founded in 1764 when Empress Catherine the Great acquired an impressive collection of paintings from the Berlin merchant Johann Ernst Gotzkowsky.

Its collections, of which only a small part is on permanent display, comprise over three million items (the numismatic collection accounts for about one-third of them). The collections occupy a large complex of six historic buildings along Palace Embankment, including the Winter Palace, a former residence of Russian emperors.

Of the six buildings in the main museum complex, five—namely the Winter Palace, Small Hermitage, Old Hermitage, New Hermitage, and *Hermitage Theatre — are open to the public.

The Western European Art collection includes European paintings, sculpture, and applied art from the 13th to the 20th centuries. It is displayed, in about 120 rooms, on the first and second floor of the four main buildings. Drawings and prints are displayed in temporary exhibitions.

Four small rooms on the ground floor, enclosed in the middle of the New Hermitage between the room displaying Classical Antiquities, comprise the first treasure gallery, featuring western jewellery from the 4th millennium BC to the early 20th century AD. The second treasure gallery, located on the ground floor in the southwest corner of the Winter Palace, features jewellery from the Pontic steppes, Caucasus and Asia, in particular Scythian and Sarmatian gold. Visitors may only visit the treasure galleries as part of a guided tour.

The Italian Renaissance galleries continues in the eastern wing of the New Hermitage with paintings, sculpture, majolica and tapestry from Italy of the 15th–16th centuries, including Conestabile Madonna and Madonna with Beardless St. Joseph by Raphael.

French Neoclassical, Impressionist and post-Impressionist art, including works by Renoir, Monet, Van Gogh and Gauguin, are displayed on the fourth floor of the Eastern Wing of the General Staff Building.

Modern art is displayed in the General Staff Building (Saint Petersburg). It features Matisse, Derain and other fauvists, Picasso, Malevich, Petrocelli, Kandinsky, Giacomo Manzù, Giorgio Morandi and Rockwell Kent. A large room is devoted to the German Romantic art of the 19th century, including several paintings by Caspar David Friedrich.

Except during the winter, the 9 low bridges in St. Petersburg are drawn during the night to allow for the passage of boat traffic. Therefore, if you don’t make it to the side of the river where you are staying before the bridges are drawn and there are no high bridges to cross, you will be stuck until the bridges are lowered. The official bridge draw schedule is published online.

BUS >   A useful mobile app called Yandex Transport helps you locate a nearest bus, trolleybus or tram on the line.

RAIL >   rzd-online.ru – regular train tickets and timetables / + High speed trains. Moscow is a railway hub, with connections to all parts of Russia and far into Europe and Asia. Due to its hub status, Moscow’s train stations are often crowded; trains are the usual form of intercity transport for most Russians.  >> *Trans-Siberian Railway

Paintings of the Hermitage Museum (wiki)