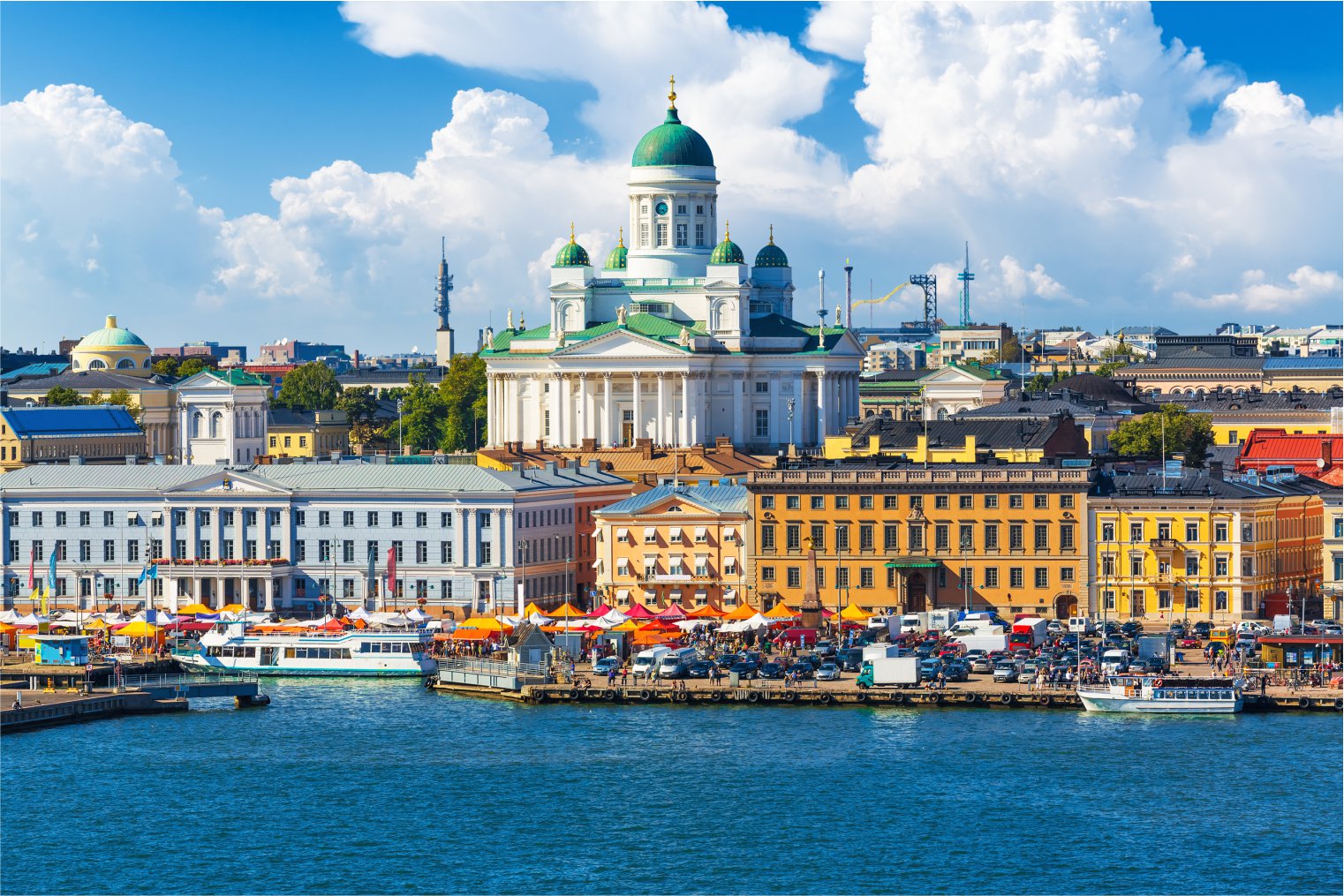 The “Daughter of the Baltic”, Helsinki (map) is Finland’s capital and largest city. Founded in 1550, Helsinki became the capital of the Finnish Grand Duchy in 1812, when the Russian Empire rebuilt it as a miniature St. Petersburg.

Today, Helsinki is a city of 600,000 people, combining the atmosphere of an international metropolis with the coziness of a small town. The city is best seen during its short summers, when the sun brings the outdoor bars and cafés to life and even the nights are light. While visiting in winter is more of a challenge, Helsinki is one of few large cities in Europe with a good chance for snow on Christmas

*Central. Probably half of Helsinki’s points of interest are downtown. The Helsinki Cathedral (map) with the surrounding buildings, dating from the early 19th century when Helsinki was made capital of the Grand Duchy of Finland, can be found here. Westwards there is what can be called the central business district with shopping and dining along the streets of Aleksanterinkatu (map) and Mannerheimintie (map).

*West. The western part of the city is a great getaway from the hustle and bustle of the city center. If you have the time, take a leisurely seaside stroll along the shores of Laajalahti bay (map), or if you’re a sports buff, visit the great summer and winter sports venues which are concentrated in this part of the city.

The list cultural and historical sights of western Helsinki isn’t bad either – it hosts the National Opera (map), Hietaniemi cemetery (map), the Church in the Rock (map), the museums of Natural History (map), Finland’s National Museum (map) and the home of the long-time president Urho Kekkonen.

*Inner East. If you, on the other hand, are interested in the more bohemian part of Helsinki and/or love to party you’d better head to the Inner East and districts like Kallio. The former working class part of the city is still associated with counterculture and to some extent left-wing politics and is largely inhabited by students. Kallio is as close as one could come to a “red light district” in Helsinki. However, the Inner East part of the city also hosts the amusement park Linnanmäki and the old wooden neighborhoods of Vallila (map) and Käpylä.

Don’t forget walking! The central part of Helsinki is compact and easily walkable. There is no need for public transportation in the main Kamppi–Central railway station area where many attractions are, and even anywhere on the main peninsula (south of the train station) is within 30 minutes at a nice leisurely pace.

If you see only one place in Helsinki in the summer, make it Suomenlinna (map). Entry to the island itself is free, but you need to pay for the ferry ride. The HSL ferry from Market Square (map) is the cheapest and most convenient way of getting there at €5 for a 12-hour tourist return.

Helsinki is a safe city for its size. However, on weekend nights, intoxicated people wandering around city streets may be an annoyance, especially during summer festivals and on New Year’s Eve and April 30, the eve of May Day, which is the most important beer-drinking festival in the Finnish calendar.

+ Getting around Helsinki (myhelsinki.fi), *Public transport in Helsinki (wiki)

BUS >   While the trams operate in the city center, buses cover the rest of the city. matkahuolto.fi

RAIL >   All long-distance trains to the city terminate at the Central Railway Station / Helsingin päärautatieasema (map), which provides easy interchange to metro, bus, tram and local train lines. Being the national capital, Helsinki has direct services from all major train stations in Finland and from Vyborg, Saint Petersburg and Moscow in Russia.