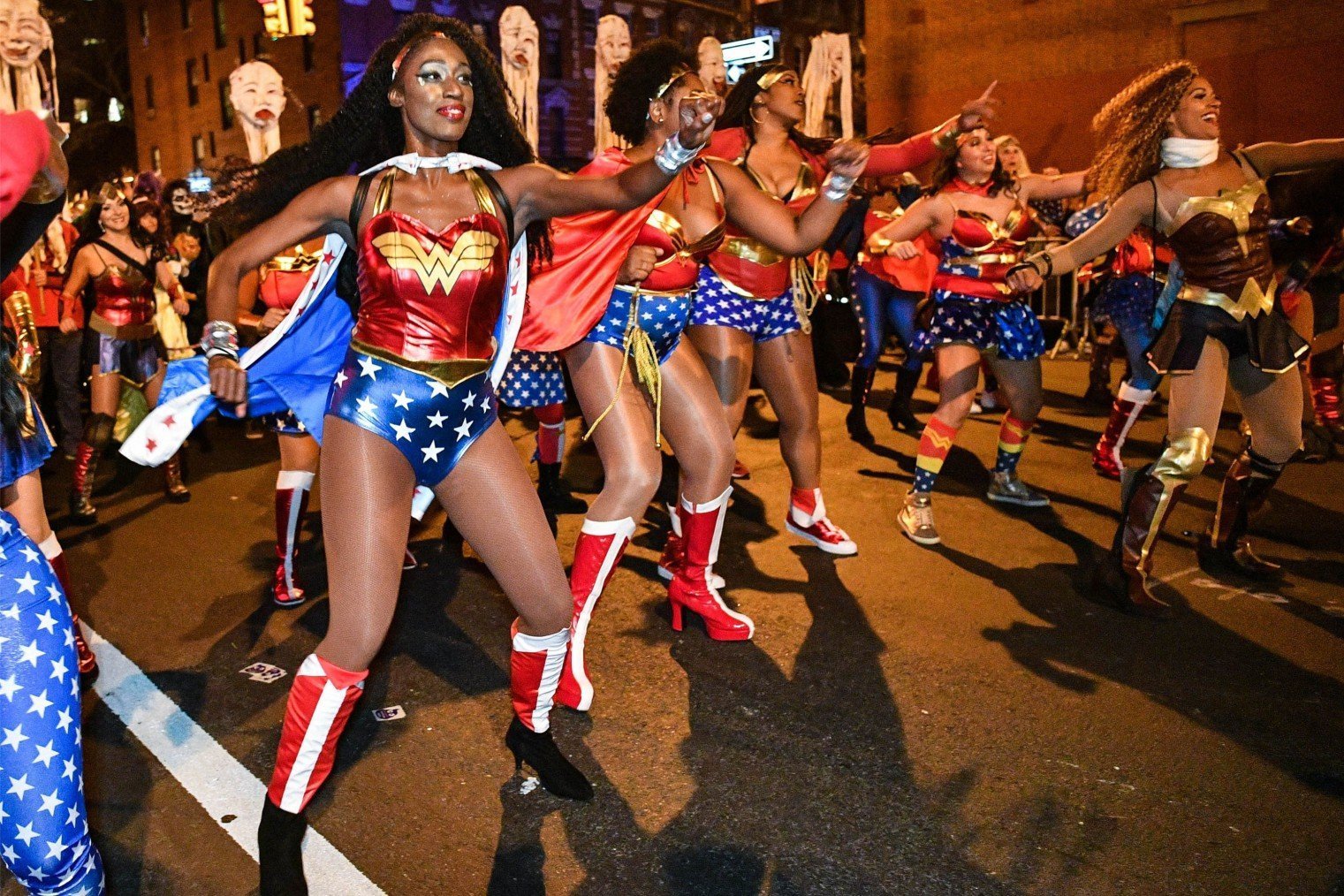 Halloween Parade is an annual holiday parade and street pageant presented on the night of every Halloween in the Greenwich Village (map) neighborhood of Lower Manhattan.

The Village Halloween Parade, initiated in 1973 by Greenwich Village puppeteer and mask maker *Ralph Lee, is the world’s largest Halloween parade and the only nighttime parade in New York City.

In the 20th century, Greenwich Village was known as an artists’ haven, the bohemian capital, the cradle of the modern LGBT movement, and the East Coast birthplace of both the Beat and ’60s counterculture movements.

The parade is largely a spontaneous event as individual marchers can just show up in costume at the starting point without registering or paying anything.

The parade’s most signature features are its large puppets which are animated by hundreds of volunteers. The official parade theme each year is applied to the puppets. In addition to the puppets, the website reports that more than 50 marching bands participate each year. In addition, there are some commercial Halloween parade floats.

Greenwich Village (or simply “the Village”) is a well-known, largely residential district in Manhattan, once famous for its vibrant art and literary community. Nowadays the neighborhood is so gentrified that the artists and poets who once lived here wouldn’t be able to afford the rents, but the Village is still worth a visit for its lovely tree-lined streets and colorful history.

Greenwich Village is also the main setting for the TV series Friends as Monica’s apartment has a Grove St. address, and there are numerous references to nearby areas such as Bleecker St. and SoHo.

The Village thrives on French tourists, honeymooners from Texas, and day-trippers from uptown and all around the region. Most will happily take your picture, give you directions, and advise you about where to eat, etc. At the same time, the Village isn’t an amusement park. The people who live there are generally rather sedate, and they cannot be on perpetual holiday. Most need a good night’s sleep so they can get up for work in the morning. Have a heart: Don’t make a lot of noise, or do anything else in public that you wouldn’t want someone to do in front of your house!

CityMapper – NYC | The ultimate transport app and technology for mobility in cities.

+ Getting Around (nycgo.com) • Public Transportation • Information about taxis (nyc.gov)

Despite a reputation for being dirty, the subway, which operates 24 hours a day, is the fastest and best way to travel around four boroughs of the city; it hasn’t reached Staten Island, which is served by a separate railway.

RAIL >   Those starting from a nearby suburb can reach NYC by NJ Transit • Long Island Rail Road • Metro-North Railroad. Amtrak also offers comfortable, convenient service to NYC from cities near and far.