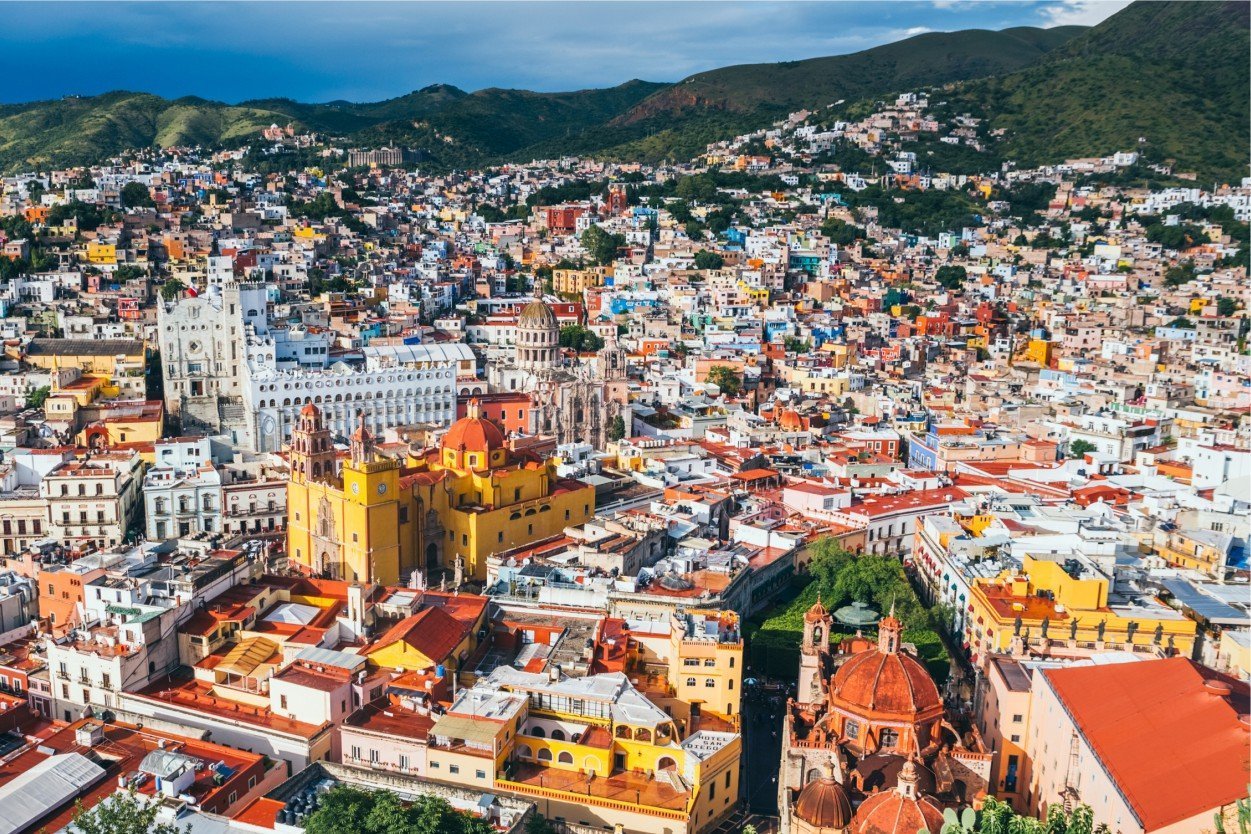 Guanajuato (map) is the capital city of the state bearing the same name. It is 390 km (about 250 miles) northwest of Mexico City. The name of the city means “Place of Frogs” in the local indigenous language and therefore the frog is the city’s official pet.

Guanajuato is a beautiful mountain colonial town. Many tourists and locals consider this city to be the most beautiful in Mexico. It used to be a major silver mining town, and many of the mines are still active. The city has a network of underground tunnels that serve as roads making this place unique in the world.

The city historic center and the adjacent mines were proclaimed a World Heritage Site by UNESCO in 1988. In 1558 a big silver vein was discovered in Guanajuato and produced nearly a third of all silver in the world by the next 250 years.

The city is home to the Mummy Museum (map), which contains naturally mummified bodies that were found in the municipal cemetery between the mid 19th and 20th centuries.

Juárez Street is one of the few through streets on the surface. It is filled with stores and restaurants and has a constant flow of people and traffic. The other through streets of town are either partially or fully underground, following the old drainage ditches and tunnels dug during colonial times.

The Guanajuato underground tunnels are a network of wide channels that help lead traffic away from the city center. These tunnels have different layer crossroads and underground junctions. The tunnels are used for traffic which is heading in an eastwards direction. The westward direction passes through the center of Guanajuato. All of the tunnels have footpaths and even some of the bus stops are subterranean.

The streets and alleys of the city are filled with mostly colonial era buildings, restaurants, bars, cafes with terraces and small plazas.

The center of the modern city is Plaza de la Paz (Plaza of Peace, map), also known as Plaza Mayor (Main Plaza). Since the colonial period, the richest of the city’s families built their main homes here, along with government buildings and the parish church, now a basilica.

If you are looking more for handmade crafts and more touristy stuff, take a bus to San Miguel de Allende (map), about an hour away from Guanajuato. There is a large open-air artisan market there. If you’d like to purchase handmade ceramics, take the roughly one-hour bus ride to Dolores Hidalgo (map).

The main church of the city is Basílica Colegiata de Nuestra Señora de Guanajuato (map) built between 1671 and 1696.

Alhóndiga de Granaditas (map) is a very large building covering an entire block. It was originally built to store enough grain to feed the city for a year to protect the population against famines such as those that occurred in 1783, due to crop failure. The Alhóndiga only served its original function for eight months after it was built.

One of the best known plazas or open spaces is Jardín de la Unión (map), on the south side of San Diego Church. The garden is filled with carefully pruned Indian laurels and, in addition to the church, is surrounded by small cafes, restaurants, and Juárez Theater. It occupies a triangular space that originally was the church atrium.

The Juárez Theater (Teatro Juárez, map) is located across from the San Diego Church in the city’s downtown. It is one of the main venues of the Cervantino Festival.

Church of San Cayetano (map). Built from 1765-1788 with funding from the rich silver mines, this is considered to be one of the best examples of Mexican Churrigueresque architecture. Particularly noteworthy are the finely-carved, elaborate altars covered in gold leaf.

Semana Santa (Holy Week). The week preceding Easter, usually March or April. Easter is considered to be the most important religious holiday here, and commences with celebrations honoring Viernes de Dolores (Our Lady of Sorrows) on the final Friday of Lent. On Viernes Santo (Good Friday) at midday the Passion of the Christ is reenacted in front of the basilica, and in the evening the Procesíon de Silencio (Silent Procession) winds through the streets. Many tourists visit from other parts of Mexico at this time, and room rates are generally double.

Buses, called urbanos, are operated by the Sistema Coordinado de Transporte de Guanajuato, and run from 07:00-22:00. There is no schedule or route map; destinations are marked or painted on the windshield. In general buses heading from east to west travel above ground along Avenida Benito Juarez, while buses heading in the opposite direction travel underground in Túnel Miguel Hidalgo. A number of stairways descending from the street lead to underground bus stops and are safe to use.

BUS >   Primera Plus + mexicoautobuses.com + ClickBus. If traveling by bus, be sure to take the express (first class) buses (directo, sin escalas, primera clase), if available. First class buses travel over longer distances between cities use toll freeways where available. Other buses such as the second class (economico, ordinario, local) buses may be very similar to first class only they travel along secondary highways through cities, towns and villages and stop anywhere along the road on request.