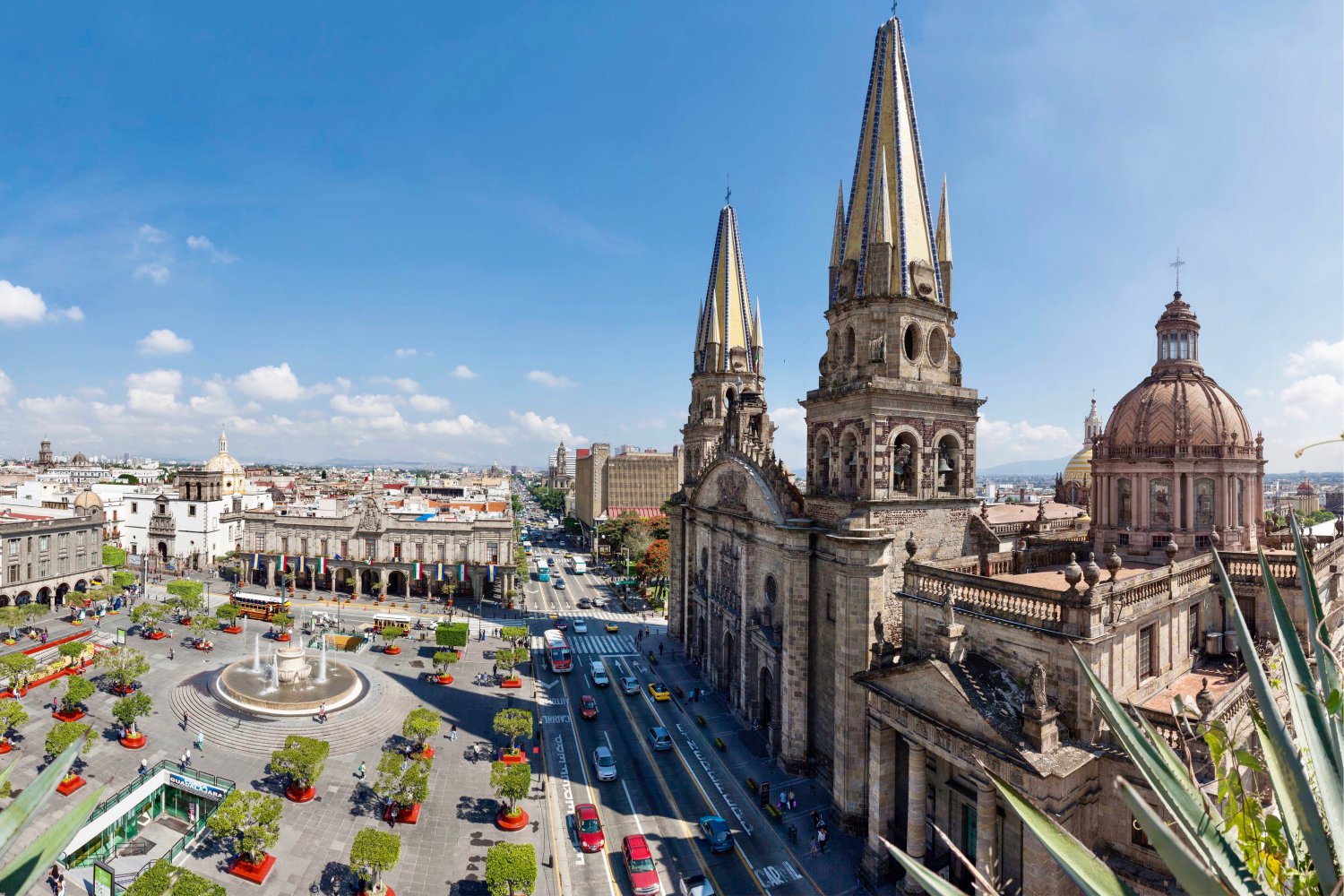 All roads lead to Guadalajara! (map) This city which name means “Stone Valley” is picturesque wherever you see it. The streets reflect a Mexico full of mariachi, tequila and traditions. Its downtown hosts beautiful temples, monuments and plazas where you can comfortably go for a walk.

Guadalajara is a global city and one of Mexico’s most important cultural centers. It is home to numerous mainstays of Mexican culture, including Mariachi, Tequila, and Birria and hosts numerous notable events.

Guadalajara has a lively cultural life. The city exhibits works by international artists and is a must-see for international cultural events whose radius of influence reaches most of the countries of Latin America, including the southwestern United States. >> *Culture of Guadalajara

Guadalajara proper is divided into four districts corresponding approximately to the northwest, northeast, southwest, and southeast quarters of the city. At the center of everything is the main area of interest to tourists, the Centro Histórico (map), or the historic downtown. Most of your time will probably be spent here.

Guadalajara has a vibrant nightlife that’s spread out all over the city, from the touristy places in the Centro Histórico (Plaza de la Liberación is a good place to start your search, map) to the college bars in Zapopan. However, perhaps the most active bar district in Guadalajara is centered along Avenida Chapultepec (map) between Hidalgo (map) and Niños Héroes (map), about 2 km west of the Centro Histórico.

*Tequila (map) – 65km in the west. Situated in a picturesque countryside setting, it’s perhaps the quintessential Guadalajara side trip, and is the best place to sample Mexico’s favorite liquor.

Birria is a savory stew made of roast chiles, spices and traditionally goat meat, though you will usually be given other meat options like mutton or beef depending on the restaurant. For birria, the restaurants in the Nueve Esquinas area (a few blocks south of Templo San Francisco) are popular and reliably good.

Tortas ahogadas (literally “drowned sandwiches”) are elongated sandwiches on birote bread, akin to submarines or po’ boys, smothered in a savory chile and tomato sauce. Numerous restaurants in the Centro Histórico specialize in these.

Pozole is a hearty soup of pork and hominy topped with fresh cabbage, radish, onion and cilantro. There are some very good pozole stands in the food court of the Mercado Libertad.

Mollete. Popular for breakfast among locals, this is a French-style roll split and covered with refried beans, then topped with ham or chorizo and cheese and toasted.

Tamales consist of pockets of masa (a starchy dough of corn flour) filled with mole (a sauce or gravy made from any of an infinite combination of chili peppers, spices, and chocolate) and the choice of chicken or pork. Most people make tamales for holidays such as Christmas, the Día de los Muertos (Day of the Dead), Independence Day, or New Year’s Day.

Enchiladas are a corn or flour tortilla rolled around and filled with meat, cheese, vegetables and/or potatoes and covered with spicy chile sauce, dressed variously in sour cream and/or cheese.

These temporary open-air street markets or bazaars are a Mexican tradition dating back to the Aztec days, and are a great way to get up close and personal with local culture at its most real—and score some bargains in the process. Some of the biggest tianguis in Guadalajara include:

Tianguis el Baratillo (map). The largest tianguis in Guadalajara, this market sells anything and everything—tools, furniture, food, clothes and accessories, kitchenware, toys, and all manner of other articles—with an emphasis on used items sold at great bargains (hence its name El Baratillo, which roughly translates as “The Flea Market”).

BUS >   The new main bus station, Estacionamiento Central de Autobuses Guadalajara (map), is in the suburb of Tonalá, which serves all long-distance routes (generally those which leave the state of Jalisco). From the new bus station to the Centro Histórico it’s convenient by the subway or e-hailing.

mexicoautobuses.com • ClickBus. If traveling by bus, be sure to take the express (first class) buses (directo, sin escalas, primera clase), if available. First class buses travel over longer distances between cities use toll freeways where available. Other buses such as the second class (economico, ordinario, local) buses may be very similar to first class only they travel along secondary highways through cities, towns and villages and stop anywhere along the road on request.