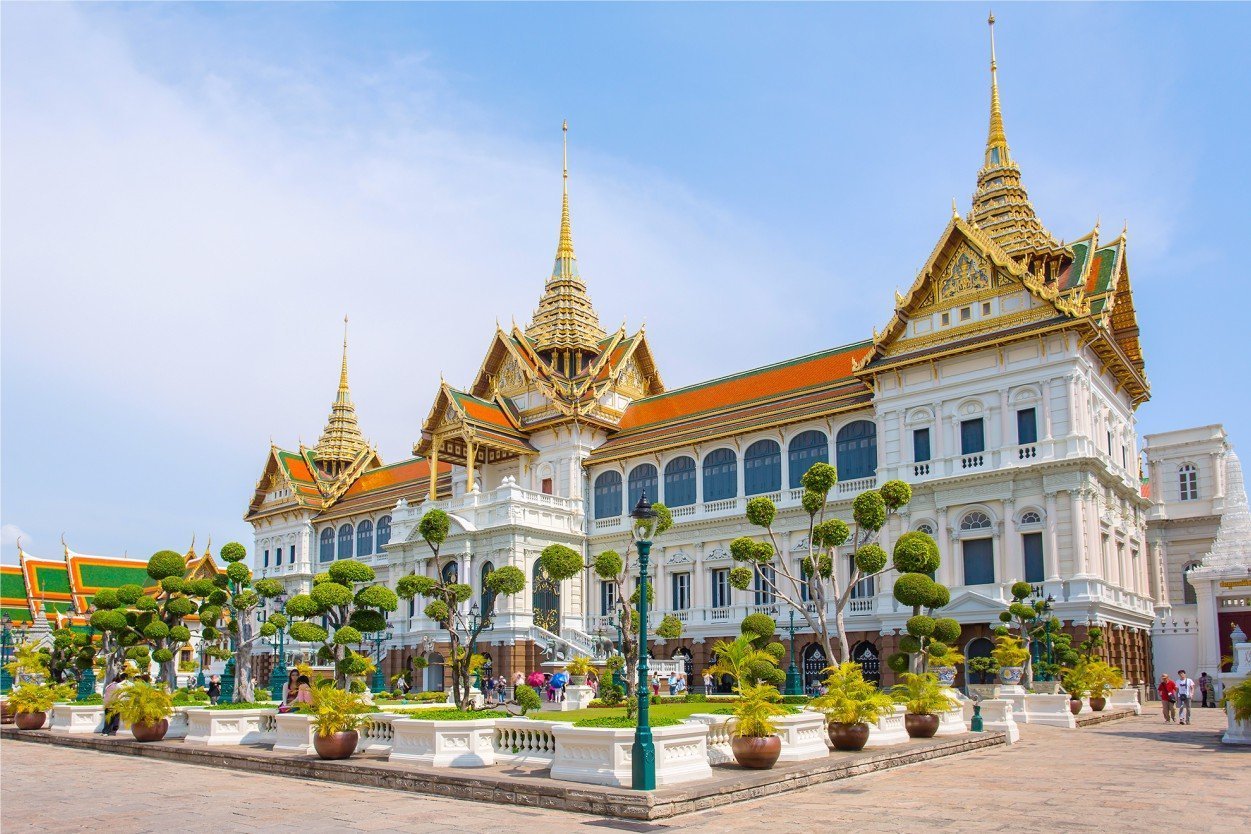 The Grand Palace (พระบรมมหาราชวัง, map) is a complex of buildings at the heart of Bangkok. The palace has been the official residence of the Kings of Siam (and later Thailand) since 1782. The king, his court, and his royal government were based on the grounds of the palace until 1925.

After the abolition of absolute monarchy in 1932, all government agencies completely moved out of the palace. Several royal ceremonies and state functions are held within the walls of the palace every year. The palace is one of the most popular tourist attractions in Thailand.

Rather than being a single structure, the Grand Palace is made up of numerous buildings, halls, pavilions set around open lawns, gardens and courtyards. Its asymmetry and eclectic styles are due to its organic development, with additions and rebuilding being made by successive reigning kings over 200 years of history.

Throughout the period of absolute monarchy, from 1782 to 1932, the Grand Palace was both the country’s administrative and religious centre. As the main residence of the monarch, the palace was also the seat of government, with thousands of inhabitants including guardsmen, servants, concubines, princesses, ministers, and courtiers.

The palace’s high whitewashed castellated walls and extensive forts and guard posts mirrored those of the walls of Bangkok itself, and thus the Grand Palace was envisioned as a city within a city. For this reason a special set of palace laws were created to govern the inhabitants and to establish hierarchy and order.

The largest and most important court is the Middle Court or the Khet Phra Racha Than Chan Klang (เขตพระราชฐานชั้นกลาง) is situated in the central part of the Grand Palace, where the most important residential and state buildings are located.

Arrive right when the Grand Palace opens (8:30 a.m.). Doing so will give you a short while to enjoy the grounds before big tour groups and heat move in.

A visit to the Grand Palace is going to be a busy and sweaty experience, so take it easy. Spare at least 2-3 hours to explore and take several rest breaks in the shade. The beauty of the palace is in its intricate details. Remind yourself just how amazing this place is and don’t rush around.

The best advice we can give you is to not plan anything major on the day of your visit to the royal residence if you can. You’ll be exhausted after exploring everything that this mega royal site has to offer.

Dress Code at the Grand Palace

To show adequate respect, you shouldn’t wear shorts or sleeveless shirts in any temple or state building in Thailand. Numerous travelers do so anyway. But unlike many of the other temples, a dress code is strictly enforced at the Grand Palace.

RAIL >   Bangkok is the location of Hua Lamphong Railway Station (map), the main terminus of the national rail network operated by the State Railway of Thailand (SRT, wiki). Compared to buses, most trains are relatively slow and prone to delays, but safer. Tickets may be purchased on-line from Thairailwayticket.com. Hualamphong Train Station (wiki, map), Thonburi Train Station (map) (*Rail transport in Thailand)

::: Source: Amazing Places on Our Planet