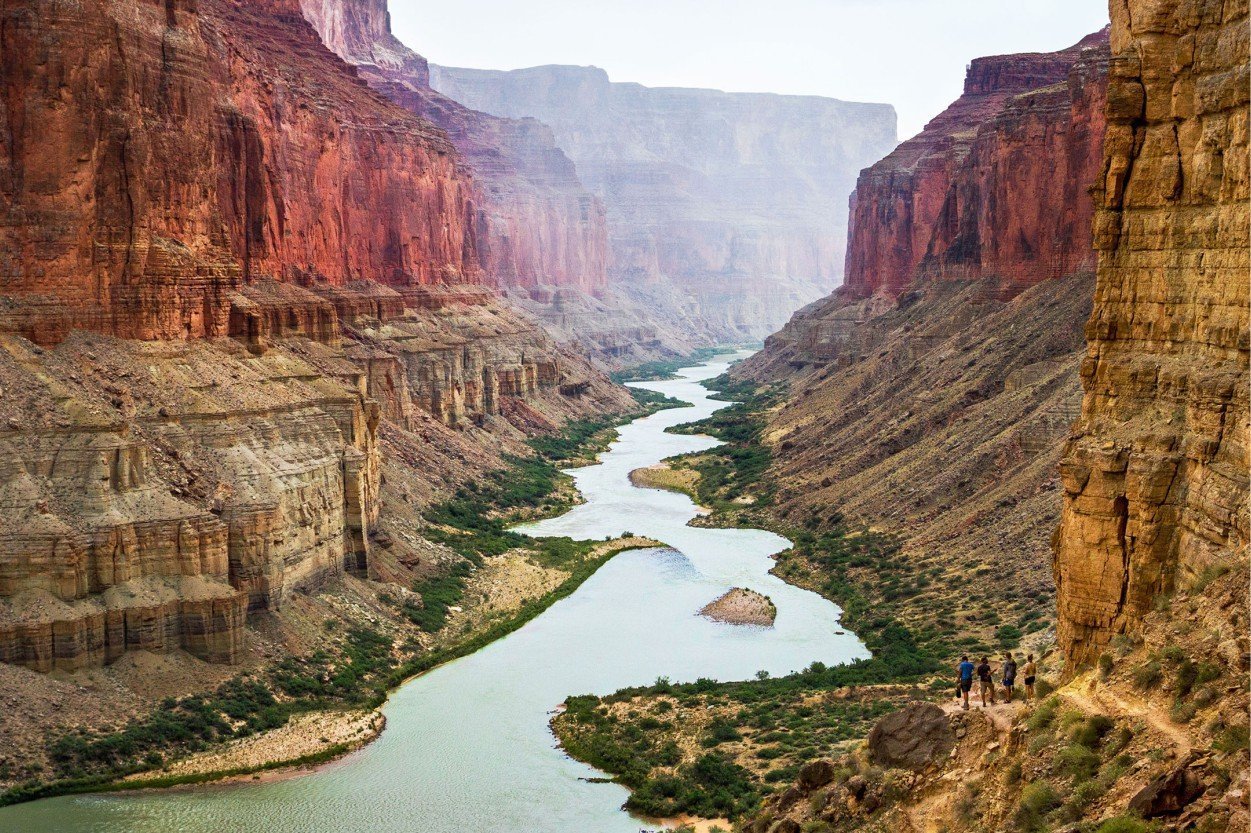 The Grand Canyon fills me with awe. It is beyond comparison—beyond description; absolutely unparalleled throughout the wide world. — Theodore Roosevelt

In spots the rock layers exposed in the canyon display over two billion years of geologic history. The canyon is an overwhelming experience, and nothing can prepare a visitor for the sight.

Even though it is not the deepest canyon in the world (see *Kali Gandaki Gorge in Nepal), the Grand Canyon is known for its visually overwhelming size and its intricate and colorful landscape. Grand Canyon National Park is one of the world’s premier natural attractions, attracting about five million visitors per year. Overall, 83% were from the United States.

There is no easy connection between the North and South rims. By car, the shortest route is a five-hour drive crossing the river by a bridge near Lee’s Ferry; by foot, it is a two-day hike across the canyon.

Camping on the North and South rims is generally restricted to established campgrounds and reservations are highly recommended, especially at the busier South Rim. North Rim campsites are only open seasonally due to road closures from weather and winter snowpack. All overnight camping below the rim requires a backcountry permit from the Backcountry Office (BCO).

It is not unusual for local canyon guides to encounter neophyte hikers in desperate shape. Some die. An unusual number of fatalities occur among young people who overestimate their abilities. Carry more liquid than you think you’ll need, and know your limits.

!  Staying Safe at Grand Canyon National Park Starts with YOU

Hiking in the Grand Canyon is unlike anywhere else on Earth – trails range in difficulty from fifteen minute loops to multi-week treks, and all offer spectacular views. In addition, there are numerous unmaintained trails throughout the park for the more adventurous.

The Arizona National Scenic Trail (map hikearizona.com) is a National Scenic Trail from Mexico to Utah that traverses the whole north–south length of the U.S. state of Arizona. The trail begins at the Coronado National Memorial near the US–Mexico border and moves north through parts of the Huachuca, Santa Rita, and Rincon Mountains. >> *United States National Trails System (wikivoyage), *National Trails System (wiki)

Whitewater rafting (River Trips and Permits) expeditions depart daily during the summer months from Lee’s Ferry. The most popular section of river for the “true” Grand Canyon river experience lies between Lee’s Ferry and Diamond Creek. Private (non-commercial DIY) river permits are also available for river trips up to 30 days in length.

The National Park Service runs an extensive shuttle service on the South Rim with three interlocking routes. The service is free, and generally runs from before sunrise until after sunset, depending on the route. During the summer the park service operates a shuttle from Tusayan into the park.

The South Rim has an airport and rail service and is a 60 minute drive from Interstate 40 and the town of Williams (map) – and 90 minutes from Flagstaff (map), also on Interstate 40.

BY CAR >  The majority of visitors to the South Rim of the park arrive from the south on Arizona Route 64 (AZ 64) (conjoined with US highway 180). Or, you can enter the South Rim from the east on AZ64.

BUS >   There are no commercial bus lines offering transportation to either rim, but several tour companies offer guided tours originating in Flagstaff, Phoenix, Las Vegas, Los Angeles and other locations. There is a small shuttle service, Arizona Shuttle Service, which does carry passengers and luggage from the Flagstaff Amtrak station (map). GoToBus.com is the leading go-to website for booking inter-city bus ticket online. Intercity bus travel is widespread, but not available everywhere. (*Long-distance bus travel in the United States)