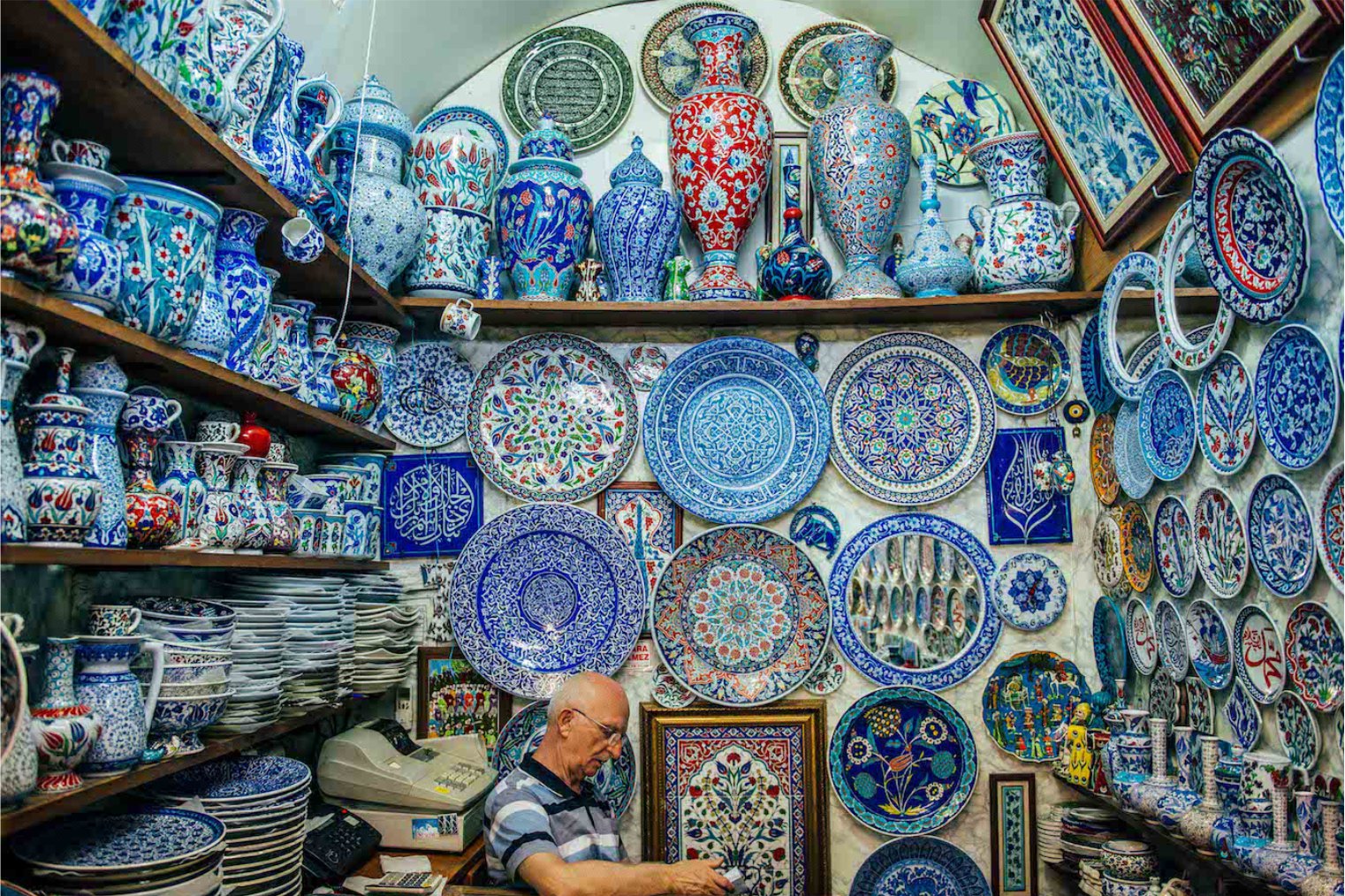 The Grand Bazaar is opened each day except Sundays and bank holidays from 9:00 until 19:00. A visit here is not simply about shopping for souvenirs. With its grand arcaded main streets and narrow alleys leading between hans (old trader inns) and bedestens (market halls), it is one of the best places to visit in Istanbul to get a sense of Ottoman life.

The construction of the future Grand Bazaar’s core started during the winter of 1455/56, shortly after the Ottoman conquest of Constantinople and was part of a broader initiative to stimulate economic prosperity in Istanbul.

At the beginning of the 17th century the Grand Bazaar had already achieved its final shape. The enormous extent of the Ottoman Empire in three continents, and the total control of road communications between Asia and Europe, rendered the Bazaar and the surrounding hans or caravanserais the hub of the Mediterranean trade.

Hand-loomed carpets and kilims (flat-weaves) are one of Turkey’s most famous handicrafts, and the Grand Bazaar is one of the country’s most popular shopping destinations to buy a rug to bring home. Good places in the Grand Bazaar to begin carpet shopping are Takkeciler Sokak and the Zincirli Han.

Some of the best modern metalware in Turkey is produced in the southeast, and much of what you see sold in the Grand Bazaar hails from places like Gaziantep, Şanlıurfa, and Mardin.

If you’re looking for jewelry in Istanbul, the Grand Bazaar is a one-stop destination. For gold work, head to the main street of Kalpakçılarbaşı Caddesi first, which is lined with gold shops. This is the street that runs between the main Grand Bazaar entrances of Bayazıt Gate, on the west side of the bazaar, and Nuruosmaniye Gate, at the eastern end.

You’ll find silver jewelry shops throughout the bazaar. The Iç Bedesten (Old Bazaar) has a clutch of stores specializing in silver jewelry, so it can be a good place to start a hunt.

Although Istanbul’s Spice Bazaar is famously the place to visit to purchase spice and Turkish delight sweets, the Grand Bazaar offers plenty of opportunities for buying edible gifts and souvenirs as well.

The Bazaar can easily be reached from Sultanahmet (map) and Sirkeci (map) by trams (Beyazıt-Kapalıçarşı stop, map).