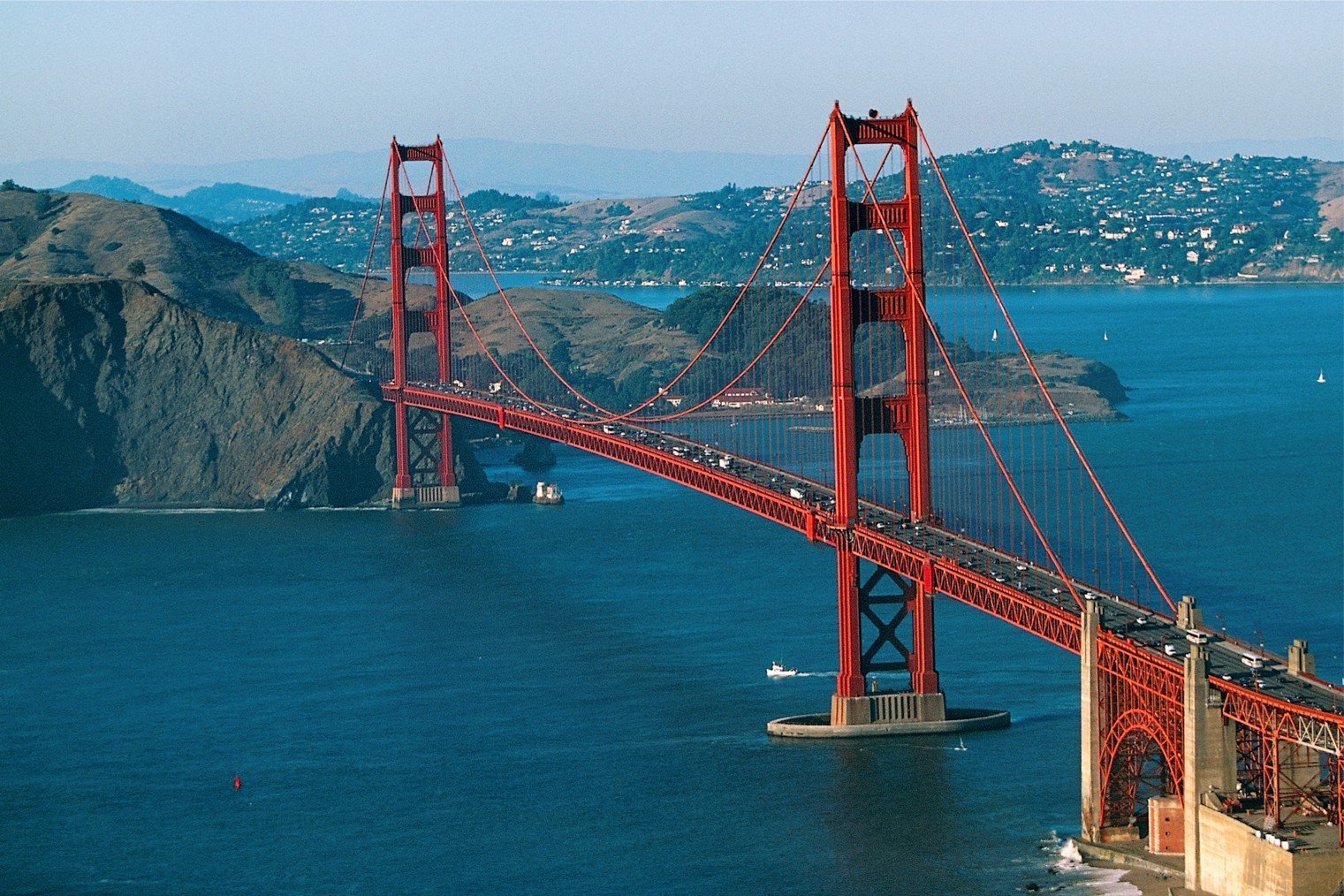 The bridge is one of the most internationally recognized symbols of San Francisco and California. It was initially designed by engineer Joseph Strauss in 1917. It has been declared one of the Wonders of the Modern World by the American Society of Civil Engineers.

The Frommer’s travel guide describes the Golden Gate Bridge as “possibly the most beautiful, certainly the most photographed, bridge in the world.”

Until 1964, the Golden Gate Bridge had the longest suspension bridge main span in the world, at 4,200 feet (1,300 m). Since 1964 its main span length has been surpassed by seventeen bridges; it now has the second-longest main span in the Americas, after the Verrazzano-Narrows Bridge (map) in New York City.

The Golden Gate Bridge’s clearance above high water averages 220 feet (67 m) while its towers, at 746 feet (227 m) above the water, were the world’s tallest on a suspension bridge until 1993 when it was surpassed by the Mezcala Bridge (map), in Mexico.

Golden Gate National Recreation Area. It is also one of the largest urban parks in the world, with a size two-and-a-half times that of the consolidated city and county of San Francisco.

The park is not one continuous locale, but rather a collection of areas that stretch from southern San Mateo County to northern Marin County, and includes several areas of San Francisco. The park is as diverse as it is expansive; it contains famous tourist attractions such as Muir Woods National Monument (map), Alcatraz, and the Presidio of San Francisco (map).

+ Outdoor Activities for the GGNRA

The main walkway is on the eastern side, and is open for use by both pedestrians and bicycles in the morning to mid-afternoon during weekdays (5:00 a.m. to 3:30 p.m.), and to pedestrians only for the remaining daylight hours (until 6:00 p.m., or 9:00 p.m. during DST). The eastern walkway is reserved for pedestrians on weekends (5:00 a.m. to 6:00 p.m., or 9:00 p.m. during DST), and is open exclusively to bicyclists in the evening and overnight, when it is closed to pedestrians.

The western walkway is open only for bicyclists and only during the hours when they are not allowed on the eastern walkway.

A visitor center and gift shop, originally called the “Bridge Pavilion” (since renamed the “Golden Gate Bridge Welcome Center”), is located on the San Francisco side of the bridge (map), adjacent to the southeast parking lot.

Muni | SFMTA – The main public transport system that you will use to travel around the city. For fare you need Clipper card.

+ HOW TO GET AROUND SAN FRANCISCO (sftravel.com)

RAIL >   BART – regional trains in the San Francisco Bay Area. Caltrain – commuter rail service to San Jose and Palo Alto. AMTRAK | eTicketing | Interactive Map. Some of the most scenic routes include the California Zephyr that runs between *Emeryville (map) in the San Francisco Bay Area of California to Chicago and the Empire Builder that goes from Chicago to Seattle or Portland. (*Rail travel in the United States)

List of Landmarks and Historic Places in San Francisco (wiki)

List of museums in the San Francisco Bay Area (wiki)