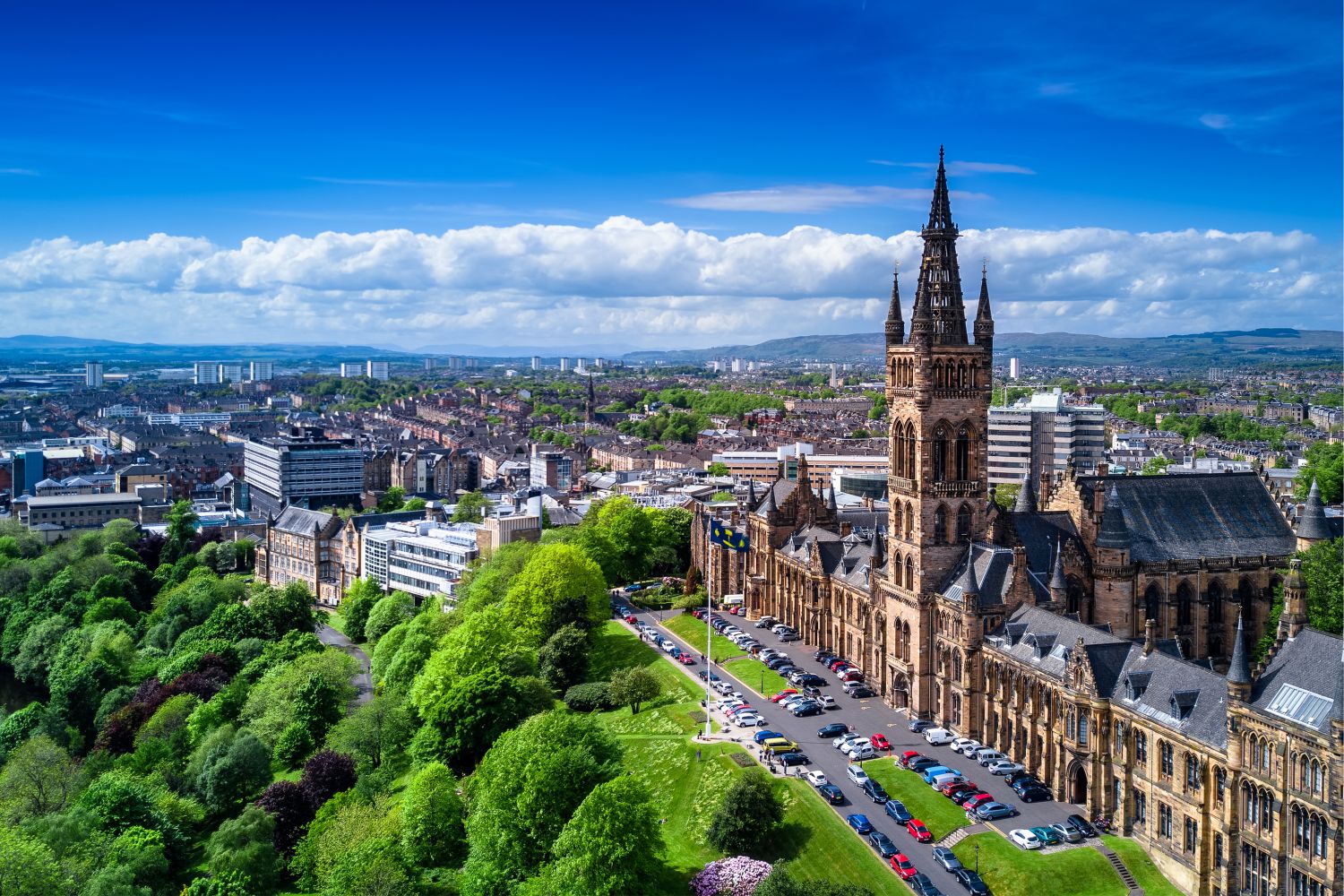 For the visitor, central Glasgow can be divided into two main areas, the City Centre, which contains the majority of tourist sights, much of the city’s shopping and entertainment, its commercial heart, and the West End, the bohemian area of cafes, restaurants and bars surrounding the University of Glasgow (map) and Kelvingrove Museum (map).

The best way to get good vistas of the city is to climb the many “drumlins” (hills) upon which the central area is built.

The vast majority of the central city area as seen today dates from the 19th century. As a result, Glasgow has an impressive heritage of Victorian architecture: the *Glasgow City Chambers (map); the main building of the University of Glasgow; and the Kelvingrove Art Gallery and Museum, are notable examples.

Glasgow Central Station (map). The city’s principal railway terminus, which is worth entering for its grand interior, which you can access from Gordon Street on the north side of the building. On the exterior, a feature of note is the massive glass walled bridge (known as the Hielanman’s Umbrella) which spans Argyle Street and holds up the tracks and platforms.

Gallery of Modern Art (map). This gallery houses a terrific collection of recent paintings and sculptures, with space for new exhibitions. In the basement is one of Glasgow’s many public libraries, with free internet access and cafe.

The equestrian statue of the Duke of Wellington (map) in front of the museum is famous for the traffic cone he usually wears on his head; it’s put there by pranksters. The Glasgow Council doesn’t find this as amusing as most tourists and residents do, and periodically removes it – if it’s missing, and you want a photo, just come back the next day and it will likely be back.

Kelvingrove Art Gallery and Museum (map). The city’s grandest public museum, with one of the finest civic collections in Europe housed within this Glasgow Victorian landmark. The collection is quite varied, with artworks, biological displays and anthropological artifacts.

Glasgow may have the finest Indian food in the United Kingdom, and indeed many Glaswegians now joke that the Indian curry is their “national dish”. Historically, the city’s finest Indian restaurants have been clustered together in the Charing Cross area, just beyond the “main” section of Sauchiehall Street.

Strathclyde Partnership for Transport (SPT) is the local agency which operates the Subway, a few specialist bus services and co-ordinates public transport in the Greater Glasgow area.

RAIL >   Visit the ScotRail website for information on all routes and timetables. Glasgow has two main railway stations. Trains from the south of Scotland, the city’s southern districts and all long-distance trains from England arrive at Central Station (Glasgow Central, map), while shuttle trains from Edinburgh and anywhere north of Glasgow arrive at Queen Street Station (GLQ, map).

AIRPORTS >   Glasgow Airport. This is the city’s principal airport, and a major portal of entry into Scotland.

Glasgow is home to a fantastic cycle hire scheme, operated by OVO Bikes. Visit OVO Bikes website to find out how it works. For ideas of the best city routes to follow by bike, check out these Smarter Travel Routes on the Smarter Travel Glasgow website.