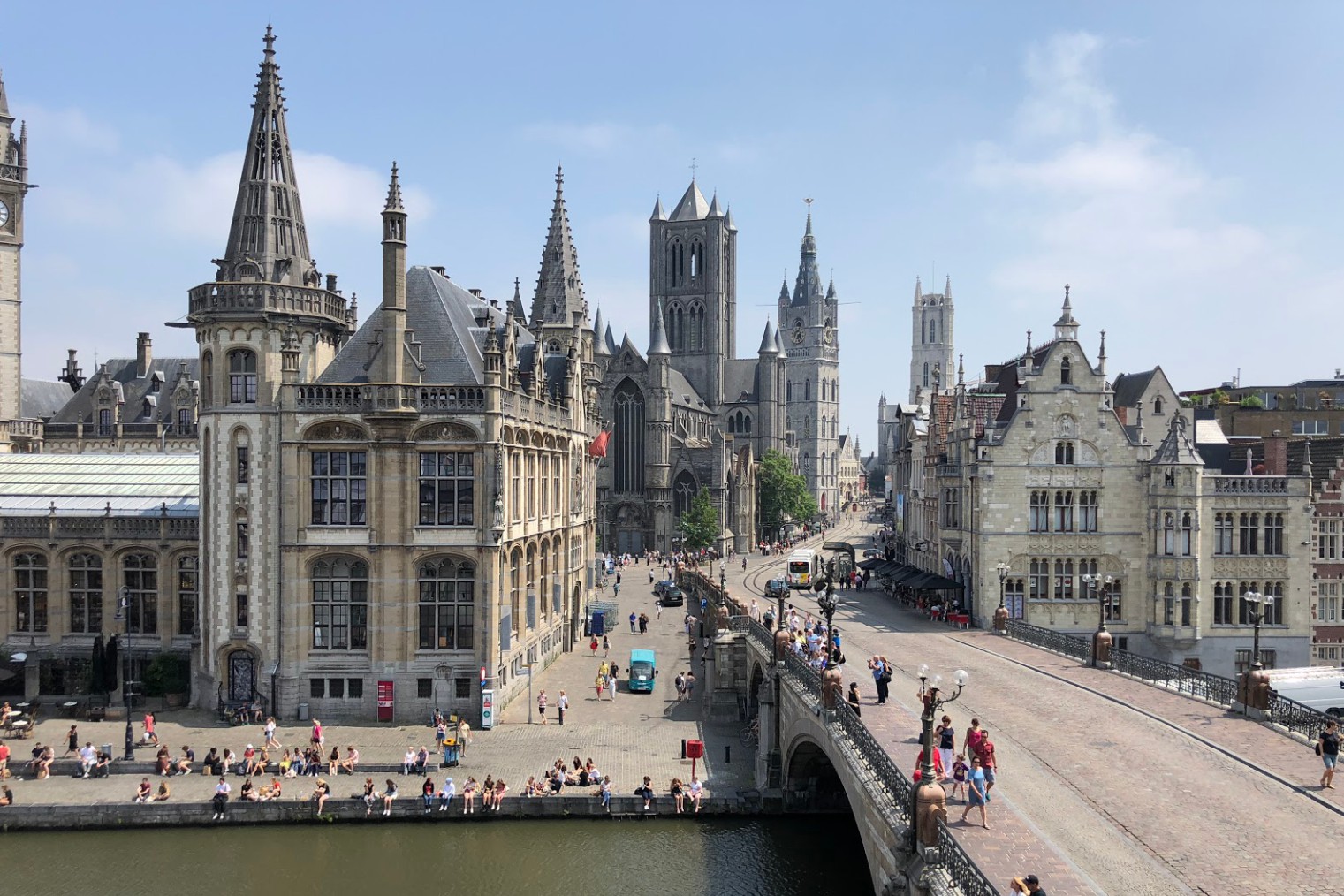 Ghent (map) is a city in Flanders. It was once considered the second largest city north of the Alps, after Paris. The impact of this rich past can be clearly seen when viewing the imposing architecture of churches and the houses of rich traders.

The whole of the city center is restored in this fashion, and still breathes the atmosphere of a thriving late-medieval city state. As the city council made the center free of cars, it is now a very welcoming and open area, which does not fail to impress even the people who live there.

The center of Ghent is quite small, so you can walk around on foot. However, the main station (Gent Sint-Pieters, map) is not in the city center, but takes a walk of about half an hour. The best option is to take the tram, which takes you directly to the center in 10 to 15 minutes.

A bicycle is the recommended way to get around in Ghent. However, there are many roads with cobblestones that make cycling a shaking experience.

Belfort en Lakenhalle (Belfry and Cloth Hall, map). The Belfry was a symbol of the city’s autonomy, begun in 1313 and completed in 1380. This municipal tower holds the great bells that have rung out Ghent’s civic pride through the centuries. Take the elevator to the Belfry’s upper gallery, 66 m high, to see the bells and take in fantastic panoramic views of the city.

Gentse Feesten (Ghent Festival) is a cultural music and theatre festival held throughout the city. It is one of the largest of its kind in Europe, attracting about 2 million visitors every year. The multitude of squares in the city centre are taken over by stages, each of them with their characteristic programming.

Sint-Baafskathedraal (St. Bavo’s Cathedral, map). Don’t miss this cathedral. Rather unimpressive exterior of Romanesque, Gothic, and baroque architecture. However, the interior is filled with priceless paintings and sculptures, including the 24-panel altarpiece “The Adoration of the Mystic Lamb”, completed by Jan van Eyck in 1432. Other art treasures in the cathedral include Rubens’s restored “The Conversion of St. Bavo” from 1623.

Het Gravensteen (Castle of the Counts, map). Built by Count Philip of Alsace, count of Flanders, soon after he returned from the Crusades in 1180 with images of similar crusader castles in the Holy Land. If its walls (2 m thick), battlements, and turrets failed to intimidate attackers, the count could always turn to a well-equipped torture chamber inside.

Sint-Niklaaskerk (St Nicholas’s Church, map). A mixture of surviving Romanesque elements of the Flemish architectural style known as Schelde Gothic, the impressive 13th- to 15th-century church was paid for by Ghent’s wealthy medieval merchants and guilds.

Vooruit (map). The cooperative ‘Vooruit’ (Progress) was running shops, bakeries, a newspaper, a cinema and a cultural centre for the labour movement. Some of the buildings are exquisite examples of late 19th/early 20th century art nouveau and art deco. Main examples can be found on Vrijdagsmarkt (the headquarter ‘Ons Huis’ – Our House – still in use today by the trade union, map) and the Kunstencentrum Vooruit on Sint-Pietersnieuwstraat, cultural temple of the labour movement and today in use as an Arts Centre and concert hall.

Graslei (map). The medieval harbour is a beautiful setting with many historic buildings, including the house of the Grain Weighers, the toll house, and the Guildhall of the Free Boatmen, fronting onto the river Leie.

Groot Begijnhof Sint-Elisabeth (Old Saint Elisabeth Béguinage, map), Begijnhofdriespark. This béguinage was founded in 1234 and was soon named after Saint-Elisabeth who was canonized in 1236. The last beguines departed from here in 1874 for the new Sint-Amandsberg béguinage.

Graffiti alley (map). Where the local graffiti artists are allowed to do their work. Although other around the town on buildings are of better quality and artistic value.

Prondelmarkt bij Sint-Jacobs (Sint-Jacobs flea market, map). Antiques, second-hand records, books, and others can be found in the weekly flea markt at Sint-Jacobs. Prices can be high, but keen eyes can find a lot of gems!

For authentic pubs, go to St. Veerleplein (the square in front of the Castle), the pubs around St. Jacob’s church (especially during weekends), or the student area around Blandijnberg (Mount Blandin), especially in the proximity of the School of Arts and Philosophy.

RAIL >   Ghent is a 30-minute train ride away from Brussels and is on the line from Brussels to Bruges and the coast. Belgiantrain.be – Use the official journey planner operated by the National Railway Company of Belgium to find train itineraries and prices. Thalys • SNCF • Eurostar • Deutsche Bahn