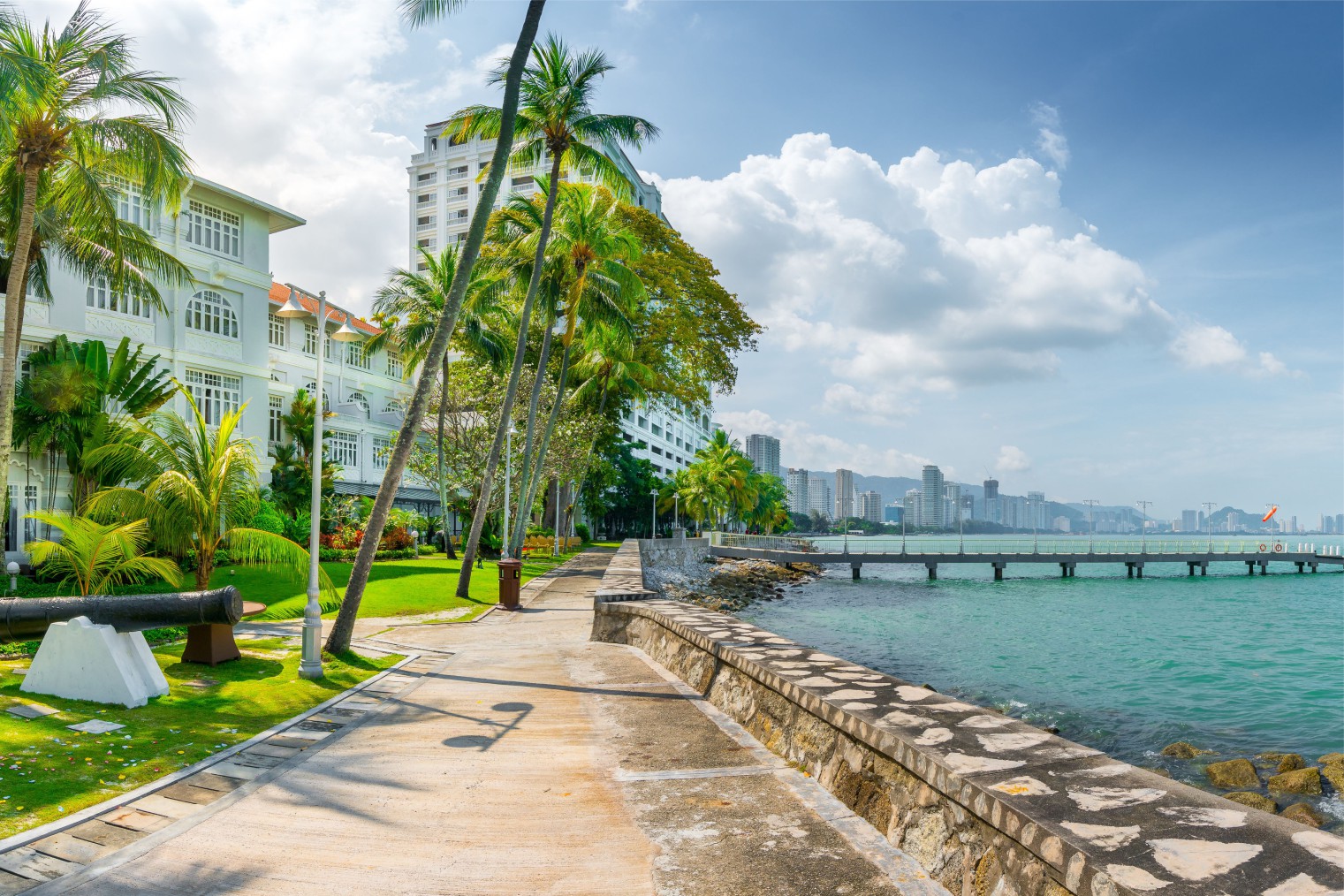 George Town (map) is the capital city of the Malaysian state of *Penang. Founded as an entrepôt in 1786, it was the first British settlement in Southeast Asia. Due to its unique architecture, the old core of the city (map) is designated as a UNESCO World Heritage Site. George Town is also regarded as the culinary capital of Malaysia.

Aside from George Town’s living heritage, colonial-era buildings interspersed with towering skyscrapers, modern shopping malls and other amenities, the city is lined with sandy, tranquil beaches.

George Town, a city filled with various festivities in any given year, has gained popularity for its arts scene as well, with the annual George Town Festival growing into one of the region’s most prominent arts event.

The city has been listed by various publications, including the Lonely Planet, Forbes and Time, as one of the top travel destinations in Asia. These are in addition to George Town’s reputation as a gastronomic haven, with the CNN placing the city as one of Asia’s best street food cities.

The harmonious coexistence of various ethnicities, cultures and religions over the centuries has manifested itself along one particular street in George Town. Pitt Street (Jalan Masjid Kapitan Keling, map) is also known as the “Street of Harmony”, due to the Muslim, Taoist, Hindu and Christian places of worship sharing the same street, metres away from one another.

George Town has always been one of the most popular tourist destinations in Malaysia. Throughout history, the city has even welcomed some of the most influential personalities, including Somerset Maugham, Rudyard Kipling, Noël Coward, Lee Kuan Yew and Queen Elizabeth II.

*Fort Cornwallis (map) The fort, named for Charles Cornwallis, is built on the site where Francis Light, founder of Penang, landed on 11 August 1786. Fort Cornwallis is the largest standing fort in Malaysia. The fort never engaged in combat during its operational history.

City Hall, The Esplanade (map). The headquarters of the Penang Island City Council, the local government of George Town. A well-preserved colonial building constructed in 1903 when Penang was a British crown colony.

Penang State Museum (map). The museum is an interesting starting point to discover the multi-ethnic background of George Town. Two floors display the history of the immigrant community that participated in the creation of the present city. The museum also exhibits the paintings of Captain Robert Smith and the lovely engravings of William Daniell.

Pinang Peranakan Mansion (map) this green-coloured Straits Eclectic house is now home to thousands of Peranakan antiques once used by the Peranakans. It was also featured in several movies and television series.

Leong San Tong Khoo Kongsi (map) Built in 1850 by the forefathers of Khoo family. In 1836, construction of a new temple began and was completed eight years later. Fire razed the wooden structure to the ground in 1894. Chinese believed that it was due to its resemblance to the Emperor’s palace, which provoked the gods. A scaled-down version was later built in 1902 and completed in 1906. The richly ornamented carvings of the roofs, walls and pillars reflect the art and architecture of ancient China and made of the finest wood.

Kapitan Keling Mosque (map). Built in the early 19th century and named after Caudeer Mohudeen. This historic mosque features a dome-shaped minaret that reflects Moorish Islamic influence and has been a prominent place of worship for local Indian Muslims for over 200 years. Free tours operate during non-prayer times. Shoes must be removed prior to entering the mosque.

Chaiya Mangalaram Thai Buddhist Temple (map). Founded in 1845, this Thai-style Buddhist temple is famous for its 33 m (108 ft) reclining Buddha, one of the world’s longest. The temple was built on a piece of land given by Queen Victoria to Siamese trustees as a gesture of goodwill to boost trading relations with Thailand.

Little India (map) is an ethnic Indian enclave. Walking on the streets, you cannot avoid smelling Indian spices and hearing Bollywood music. The area is very lively; one might say it is the noisiest part of George Town with the sights, sounds, aroma and foods of India.

Chowrasta Market (map). Built in 1890, Chowrasta Market is one of the oldest wet markets in Malaysia. It does not only offer poultry and vegetables, however, as tourists will find various local products.

Rapid Penang is the main public bus service provider, with various routes covering the entire city of George Town as well as the State of Penang.

If you plan to stay in George Town and around Penang for more than a few days, you can buy a “Rapid Passport“. This 7-day travel pass allows for unlimited travel on all Rapid Penang buses.