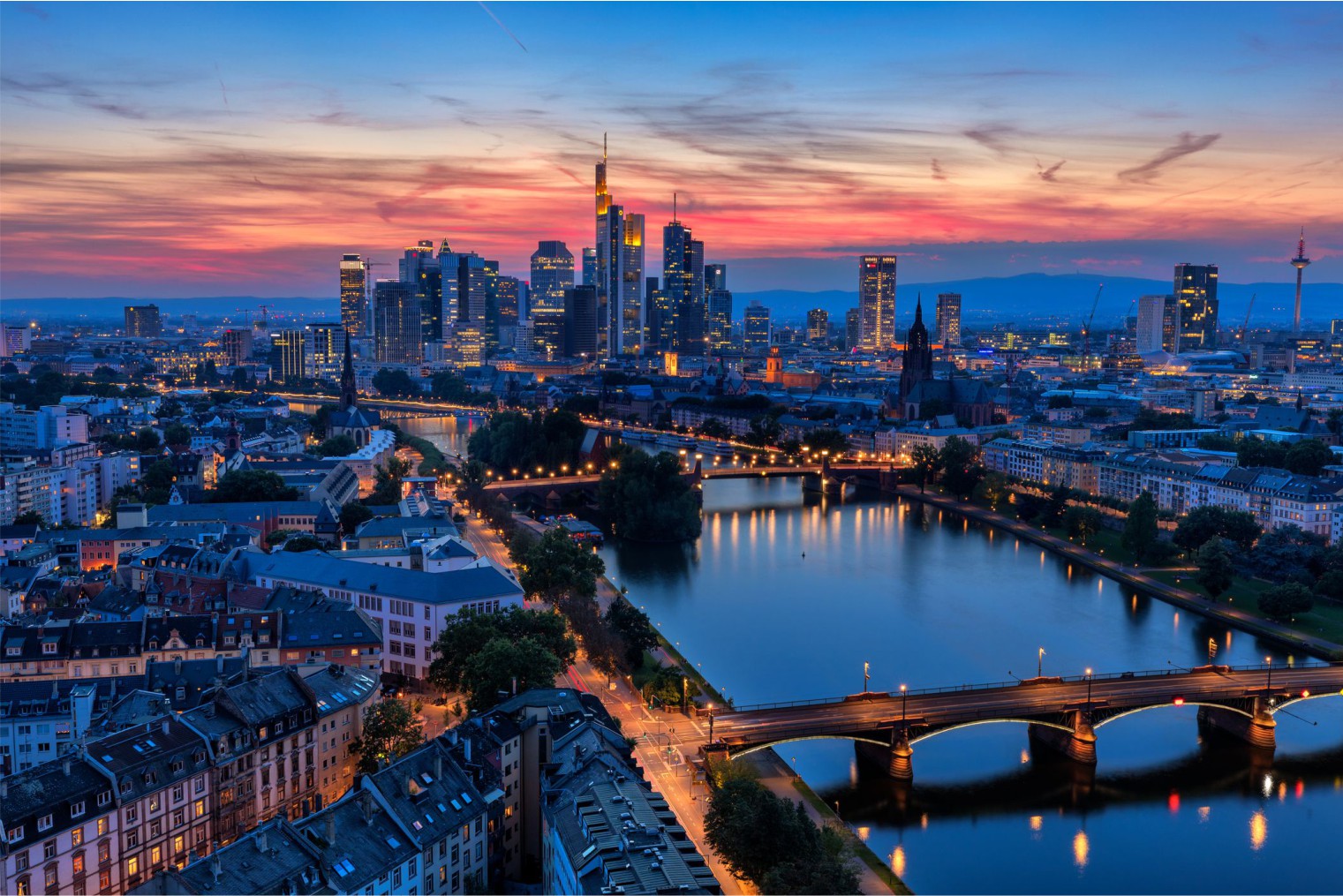 Frankfurt am Main (map) is considered the business and financial centre of Germany. It is the fifth largest city in Germany after Berlin, Hamburg, Munich and Cologne.

Frankfurt is a city of contrasts. Wealthy bankers, students and hippie drop-outs coexist in a city that has some of the highest, most avant-garde skyscrapers of Europe next to well maintained old buildings. The downtown area, especially Römer square (map) and the museums at the River Main, draw millions of tourists every year.

On the other hand, many off-the-beaten-track neighbourhoods, such as Bockenheim, Bornheim, Nordend and Sachsenhausen, with their intact beautiful 19th-century streets and parks are often overlooked by visitors.

Frankfurt has many high-rise buildings in the city centre, forming the Frankfurt skyline. It is one of the few cities in the European Union (EU) to have such a skyline, which is why Germans sometimes refer to Frankfurt as Mainhattan, combining the local river Main and “Manhattan”.

With more than 30 museums, Frankfurt has one of the largest variety of museums in Europe. Twenty museums are part of the Museumsufer, located on the front row of both sides of the Main riverbank or nearby.

Ten museums are located on the southern riverbank in Sachsenhausen between the Eiserner Steg and the Friedensbrücke. The street itself, Schaumainkai, is partially closed to traffic on Saturdays for Frankfurt’s largest flea market.

Museumsuferfest – Museums Riverbank Festival is one of Germany’s biggest cultural festivals, three days at the end of August along the Main riverbank in the city centre. The 20 museums there open far into the night. It offers live music, dance shows, booths for crafts, jewellery, clothes and food stands from around the world.

For a view of the skyline try the Main river bridges. The eastern bridges offer the best view, in particular the Ignaz-Bubis-Brücke (map) and also the Alte Brücke (map).

There are of course restaurants all over Frankfurt. One notable area for dining may be what is locally known as the Fressgass (a literal translation would be “munching alley”). The correct name of this street is Große Bockenheimer Straße (map). As the nickname implies, the Fressgass features many cafés, restaurants, and deli food stores. It is a popular area to dine after going shopping.

Kaiserstraße (map) – One of the best-known streets and considered one of the most beautiful because of its amount of Gründerzeit-style buildings. Kaiserstraße is still a synonym for Frankfurt’s Red-light district although sex-oriented businesses moved to neighbouring streets such as Taunusstrasse.

*Römer (map), the German word for Roman, is a complex of nine houses that form the Frankfurt city hall (Rathaus). The houses were acquired by the city council in 1405 from a wealthy merchant family.

Altstadt (map). The historic old town of Frankfurt was one of the largest half-timbered towns in Germany until the extensive destruction in World War II with its around 1250 half-timbered houses, most of which date from the Middle Ages. However, from 2012 to 2018, a small section of the old town was reconstructed.

Frankfurt Cathedral (Frankfurter Dom, map) is not a cathedral, but the main Catholic church, dedicated to St. Bartholomew. The Gothic building was constructed in the 14th and 15th centuries on the foundation of an earlier church from the Merovingian time. From 1356 onwards, kings of the Holy Roman Empire were elected in this church, and from 1562 to 1792, Roman-German emperors were crowned there.

*St. Paul’s Church (Paulskirche, map) is a national historic monument in Germany because it was the seat of the first democratically elected parliament in 1848.

The Saalhof (Historical Museum, map) is the oldest conserved building in the Altstadt district and dates to the 12th century. It was used as an exhibition hall by Dutch clothiers when trade fairs were held during the 14th and 15th centuries. The Saalhof was partly destroyed in World War II and later rebuilt.

Städel (map), one of the most famous art museums in Germany. Museum für Moderne Kunst (map). Because of its triangular shape, it is popularly called “piece of cake”. Naturmuseum Senckenberg (Senckenberg Natural History Museum, map), the second-largest natural history museum in Germany

Kleinmarkthalle (Small Market Hall, map) is a market hall in the city centre close to Konstablerwache offering fresh food and flowers. The Kleinmarkthalle is the largest public marketplace in Frankfurt.

Many of the hotels in Frankfurt are located around the Hauptbahnhof (map), but this is also the red light district in Frankfurt and is also known for the many beggars and druggies who hang around. Although the area is well policed and quite safe, many tourists are often left with a somewhat negative impression of Frankfurt after staying in this area.

CityMapper – Frankfurt | The ultimate transport app and technology for mobility in cities.