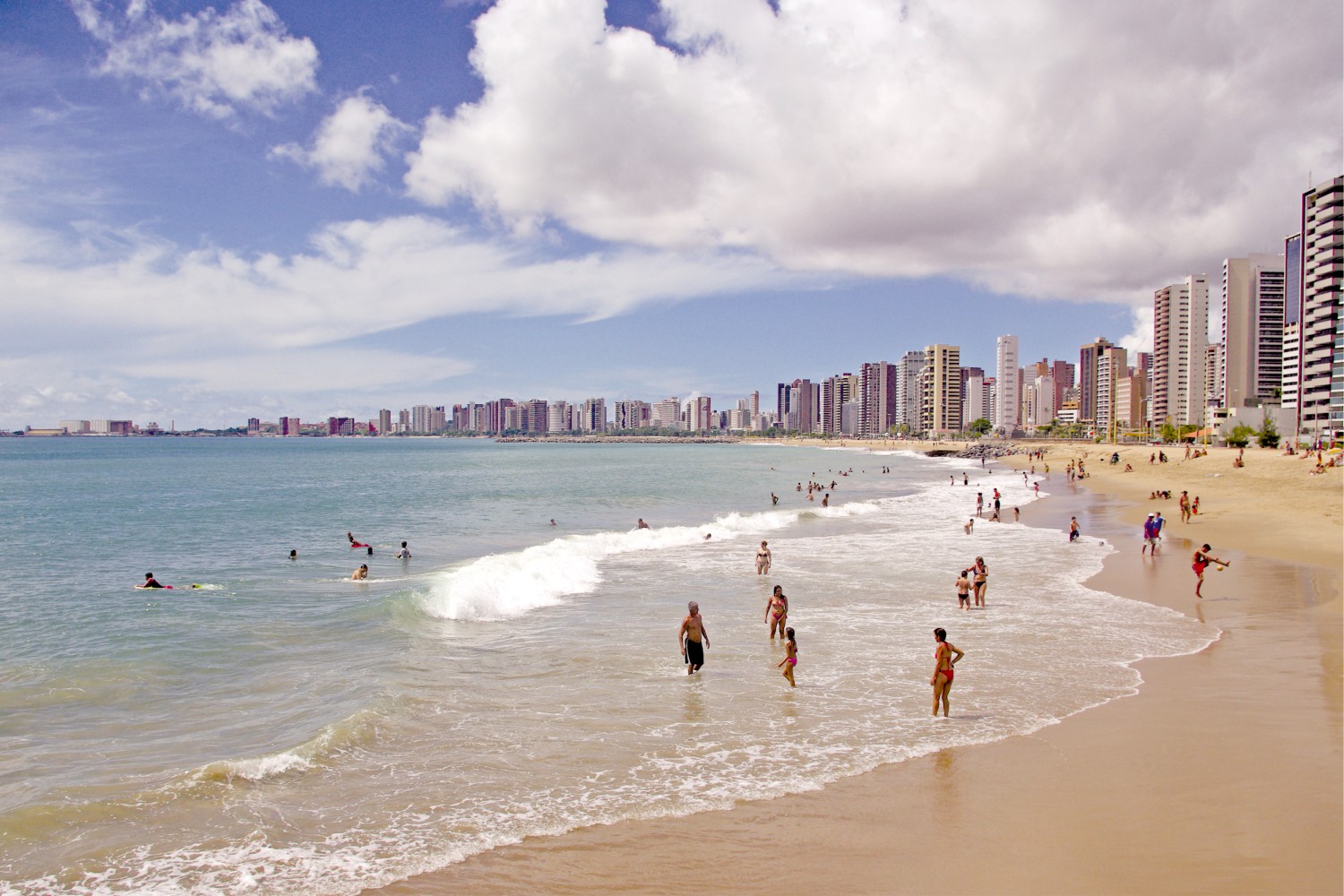 Fortaleza (map) is the state capital of *Ceará, located in Northeastern Brazil. It is one of the largest cities in Brazil and certainly one of the most vibrant. The city is perhaps the most popular domestic package tour destination, and Europeans are following suit.

Most tourists will not go more than 5 blocks from the sea, except for the airport and bus station, and perhaps a shopping mall.  Section of Beira Mar (map) (literally Sea Side) is by far the most attractive part of the city, with police stands and patrols making it fairly safe around the clock, although rather deserted from midnight to dawn.

Even though the police are working hard to make Fortaleza safer and the city is less dangerous than it used to be, it’s still one of Brazil’s most dangerous cities. The tourist zone around Beira Mar is relatively safe, thanks to a constant police presence.

Quite an effort has been put into restoring colonial architecture over the last years. Still there is no area that is completely “clean”, but the stretch from the beachfront of Praia de Iracema, via Dragão do Mar and to Praça do Ferreira is steadily improving and worth a walk.

These districts are probably the most interesting for visitors:

Theatro José de Alencar (map). A theater on the south side of the eponymous square. The architectural landmark of the city, and also declared a National Historic Landmark (finished in 1912).

Mercado dos Pinhões (2 blocks inland from the shops at Rua Monsenhor Tabosa, map). This former meat market was imported piece by piece from Europe and set up in 1897. Refurbished and now used as a handicrafts fair with a variety of cultural events five days a week.

Dragão do Mar (map). The square at Rua Dragão do Mar is culturally a very lively place. Several artisans are selling their work there, musicians are performing and there are several bars and restaurants with international cuisine as well as night clubs of different styles.

There are handicraft shops all around the city, but the best places to go are the Feirinha da Beira Mar (Beach front fair, daily about 16:00 – 22:00, map) and the Mercado Central (near the cathedral, map).

With a tropical climate, the weather is always sunny year-round, but never extremely hot. The rainy season occurs in Fortaleza between February and May. In the driest months, between July and December, the winds are stronger and lessen the heat, rainfall practically stop and these are the most favorable months for windsurfers.

BUS >   Rodoviária João Tomé (map) – The main bus station has buses to most all of the country, often via connections. Expresso Guanabara has the most extensive network from here. Buses to neighbouring towns, within some 100 km, often leave from the train station in the centre.

Like any major Brazilian city, Fortaleza can be done almost entirely by bus. If you get off at a terminal (there are nine such bus terminals in Fortaleza) you can change lines without paying again. But if you change buses somewhere else, you will need to buy a new ticket. Most lines run 7 days a week 05:00-23:00, give or take.

AIRPORTS >   Pinto Martins International Airport. There are flights from almost every major city in Brazil and internationally from Bogotá Buenos Aires, Frankfurt, Lisbon, Miami and Praia. There is an urban bus 404 Aeroporto/Benfica which runs frequently between the airport and the center, where you can find buses to virtually anywhere in Fortaleza (not recommended at night).