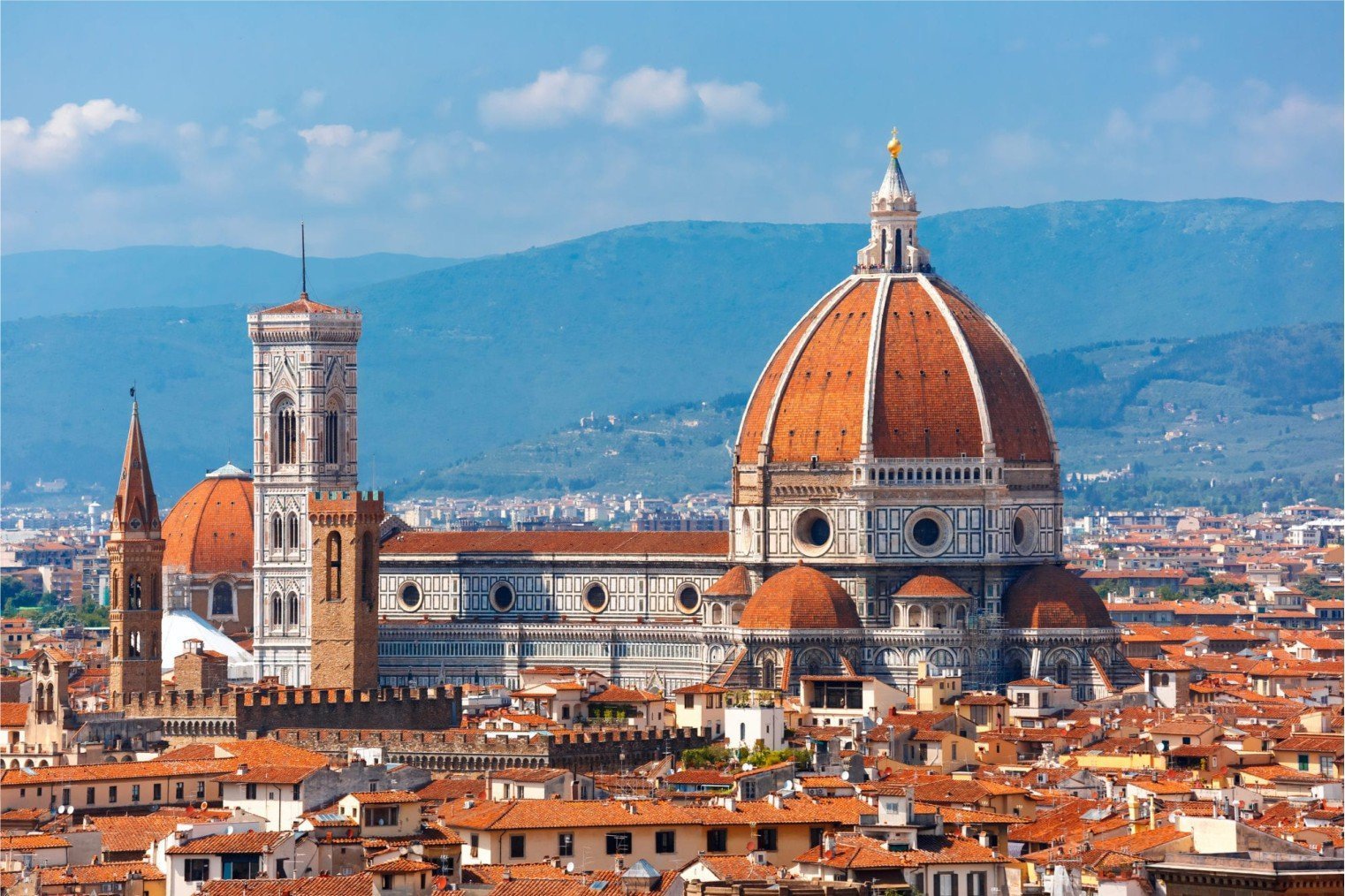 Florence (map) is a city in Central Italy and the capital city of the Tuscany region. Florence was a centre of medieval European trade and finance and one of the wealthiest cities of that era.

The city attracts millions of tourists each year, and UNESCO declared the Historic Centre of Florence a World Heritage Site in 1982. The city is noted for its culture, Renaissance art and architecture and monuments.

The city also contains numerous museums and art galleries, such as the Uffizi Gallery (map) and the Palazzo Pitti (map), and still exerts an influence in the fields of art, culture and politics. Due to Florence’s artistic and architectural heritage, Forbes has ranked it as one of the most beautiful cities in the world.

Most of the major tourist sights in Florence are within easy walking distance of each other. It is possible to walk from one end of the historic center of Florence to the other – north-south or east-west in a half hour.

Florence was home to the Medici, one of European history’s most important noble families. Lorenzo de’ Medici was considered a political and cultural mastermind of Italy in the late 15th century.

Florence is known as the “cradle of the Renaissance” (la culla del Rinascimento) for its monuments, churches, and buildings. The best-known site of Florence is the domed cathedral of the city, Santa Maria del Fiore (map), known as The Duomo, whose dome was built by Filippo Brunelleschi. The nearby Campanile (Giotto’s Bell Tower, map) and the Baptistery buildings are also highlights.

Street Performers by the Uffizi, in front of the Palazzo Vecchio (map). In the evenings street performers often put on a show here. Performances can range from violin duets to people dressed as sculptures. A nice place to stop while you eat your after-dinner gelato.

The church of *San Lorenzo (map) contains the Medici Chapel, the mausoleum of the *Medici family — the most powerful family in Florence from the 15th to the 18th century. Nearby is the Uffizi Gallery, one of the finest art museums in the world – founded on a large bequest from the last member of the Medici family.

Uffizi Gallery (map). The artworks are on the first and second floors, they keep the lifts well hidden. Highlights include Birth of Venus by Boticelli, Dukes of Urbino by della Francesca, Medusa by Caravaggio, Venus of Urbino by Titian, Annunciation by da Vinci, Pope Leo X and family by Raphael, Velasquez’ self-portrait, Rembrandt’s final self-portrait, and many other big names.

Galleria dell’Accademia (map). Highlights are Michelangelo’s original David (the one in Piazza della Signoria is a copy) and his unfinished Slaves. It also includes Florentine painting, a museum of musical instruments, and Russian icons.

Palazzo Pitti (map). It’s now divided into four museums (same ticket): ground floor is the Treasury of the Grand Dukes; first floor houses the Palatine Gallery and the Royal and Imperial Apartments, second floor is the Modern Art Gallery and the Museum of Costume and Fashion. The Boboli gardens are just behind the palazzo.

Stroll the Boboli Gardens (map). These extensive gardens behind the Pitti palace provide excellent views of the city of Florence and numerous sculptures in a relaxed environment. Stop in the hilltop café, grab a drink and a seat outside and enjoy the view.

Palazzo Vecchio (map). Old city palace/city hall, adorned with fine art. The replica of Michelangelo’s “David” is placed outside the main door in the original location of the statue, which is a symbol of the Comune of Florence.

Santa Croce (map). Contains the monumental tombs of Galileo, Michelangelo, Machiavelli, Dante, Rossini, and many other notables in addition to artistic decorations.

Santa Maria Novella (map). A beautiful church with great artwork, including a restored Trinity by Masaccio. Also, the Chiostro Verde, to your left when facing the front entrance of the church, contains frescoes by Paolo Uccello which are quite unusual in style and well worth seeing, if the separate entrance is open.

Florence is a great starting point and base for a tour of Tuscany. Attractive day trips include Pisa, Lucca, San Gimignano, Arezzo, Fiesole, Lucignano, Siena, and of course the wine zone of Chianti. Greve in Chianti is the market town of the Chianti zone and it is in the hills surrounding Greve that you can rent a B&B room or a small apartment on a working vineyard for less than a hotel in Florence.

ATAF and Li-nea – buses around Florence.

CityMapper – Florence | The ultimate transport app and technology for mobility in cities.