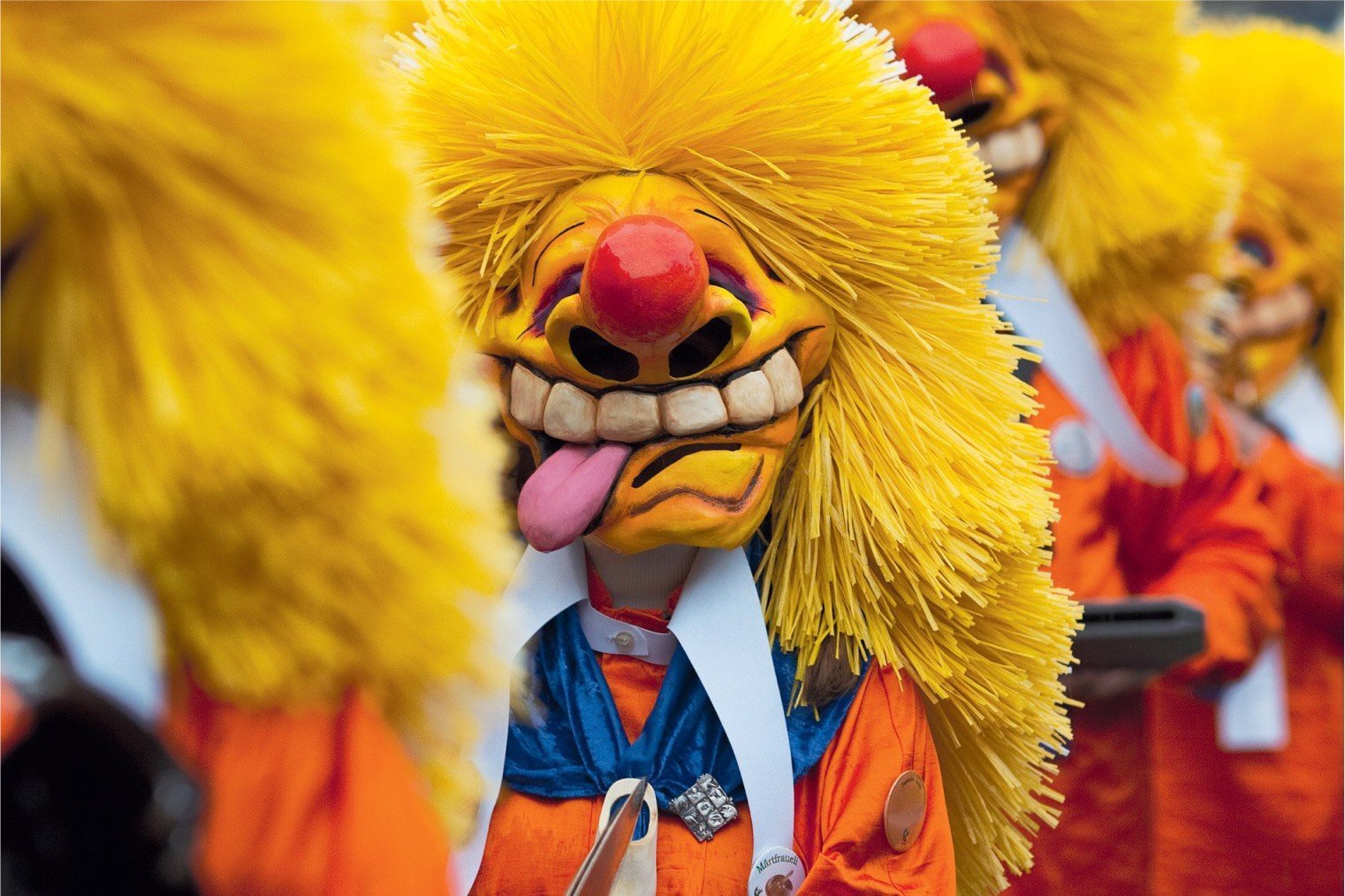 The Carnival of Basel is the biggest carnival in Switzerland and takes place annually between February and March in Basel (map). It has been listed as one of the top fifty local festivities in Europe. Since 2017, the Carnival of Basel has been included in UNESCO’s intangible cultural heritage.

The Basler Fasnacht starts on the Monday after Ash Wednesday at precisely 4:00 am with the so-called Morgestraich. The carnival lasts for exactly 72 hours and, therefore, ends on Thursday morning at 4:00 am. During this time the Fasnächtler (the participants) dominate the old town (map) of central Basel, running free in the streets and restaurants.

Basler Fasnacht is often referred to as die drey scheenschte Dääg (“the three most beautiful days”).

The approximately 18,000 active Fasnächtler dress up in a wide variety of costumes, including a mask known as a Larve. Participants are fully concealed and must remain incognito while parading; it is considered inappropriate and a breach of protocol to identify oneself by removing the mask, other than during official breaks from the parade.

The parades taking place on Monday and Wednesday afternoon are called Cortège and follow two defined ring routes: the inner ring runs clockwise, and the outer ring runs counterclockwise. The two routes are sometimes referred to as the blue and the red route because of their colour representation on the route map.

According to some local historians, the throwing of confetti is a typical tradition from Basel that later spread to the rest of the world. While there is no proof for this theory, the amount of confetti used during Basler Fasnacht is huge in comparison to other carnivals.

The Morgestraich (in Basel dialect, Morgenstreich in High German) on Monday morning marks the beginning of the Carnival in Basel. At exactly 4 am all the lights in the old town of Basel are turned off, and the Industrielle Werke Basel (the Industrial Works of Basel are the public utility organisation of the city) shuts down the streetlights. The only light remaining comes from the lanterns of the Cliques.

There are two major types of lanterns, the large Zugslaterne (parade lanterns) that are wheel-mounted or carried by 2 to 4 people in front of the Cliques; and the head-mounted Kopflaterne (head lanterns) that every participant wears. Some Cliques have uniform Kopflaternen but traditionally during the Morgestraich, Clique members do not wear uniform costumes. This varied dressing is called “Charivari”.

From 4 am on Monday, many restaurants and bars in the old town open their doors and remain open for the following 72 hours. There, it is possible to sample traditional Basler carnival specialties, such as flour soup, Zwiebelkuchen and Käsewähe (a quiche-like baked dish).

+ Getting around in Basel (basel.com) • Swiss Travel System | Swiss Pass