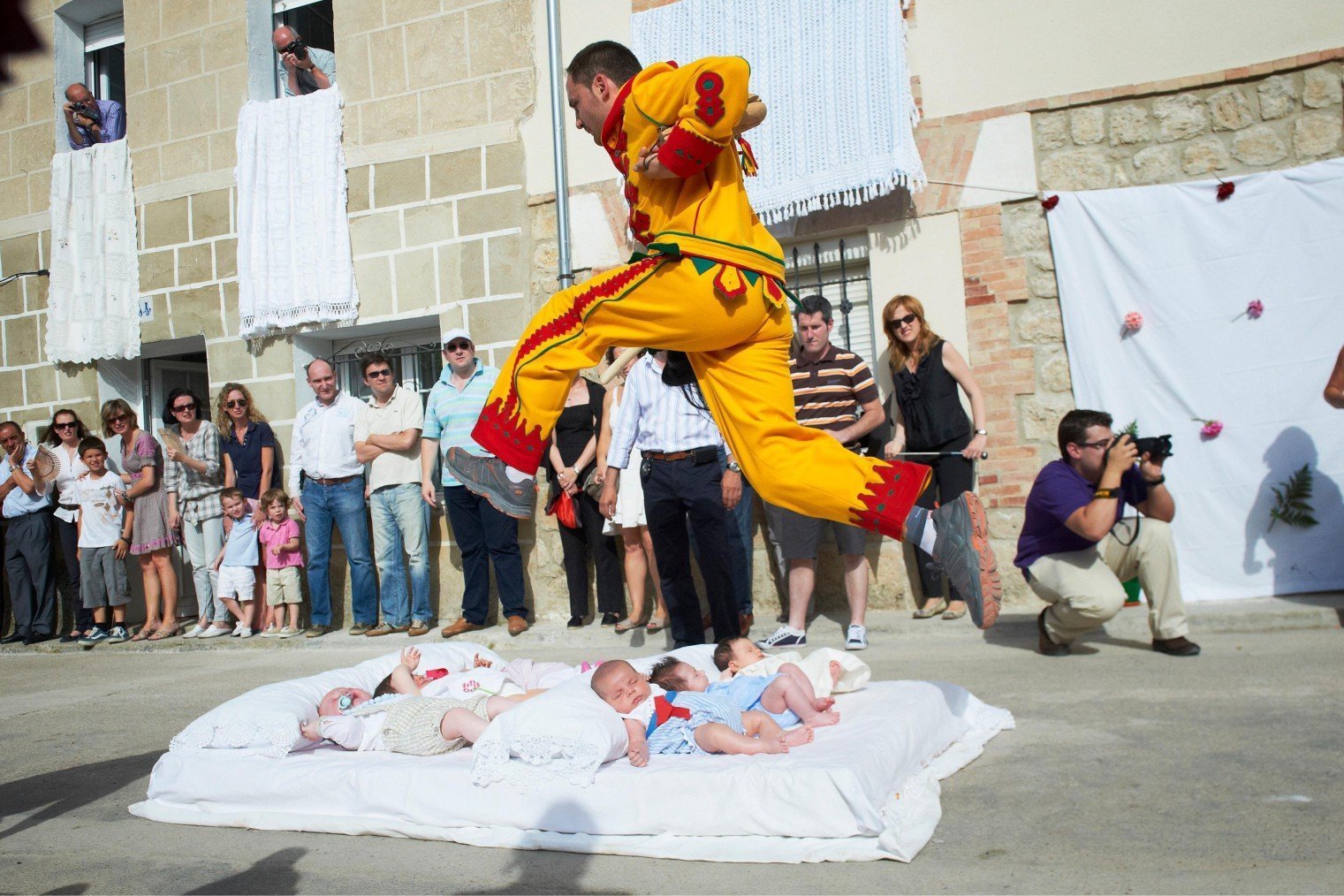 Baby jumping is a traditional Spanish festival dating back to 1620. It takes place annually to celebrate the Catholic feast of Corpus Christi in Castrillo de Murcia (map), in the province of Burgos. It appeared in the British newspaper The Guardian as one of the strangest holidays.

During the act, known as El Salto del Colacho (the devil jump) or simply El Colacho, men dressed as the Devil (known as the Colacho) in red and yellow suits jump over babies born during the previous twelve months of the year who lie on mattresses in the street. The “devils” hold whips and oversized castanets as they jump over the infant children.

The babies are laid on the ground in swaddling clothes and grown men, yes adult males, dressed as devils jump over the infants and this is supposed to cleanse them of all evil doings. The question of who is protecting the babies from the example being set by the adults begs to be asked but who are we to doubt this traditional combination of religion and Spanish folklore which proves to be great fun, if not a little scary, to watch.

Anyone who is not blessed with receiving this protection during their early childhood and has lived life looking over their shoulder waiting for bad things to happen or illness to strike can, in their adulthood, choose to take part in an exercise of jumping through fire on 21st December in Granada, known as the Hogueras (the Bonfires of Saint John). This is intended to protect them from illness.

Castile and Leon is an autonomous region of Spain. The region is home to eight World Heritage Sites. Tourists are drawn to the region by the historical and cultural value of its cities and also by the natural and scenic attractiveness of its different comarcas.

La Alberca (map) is worth a visit. It is historical town with a population of about 1000. Only residents are allowed to have vehicles in the historical centre. In the off season, it can be a quiet, sleepy location. Besides being very beautiful, the town is known for the production of ham and other pork products.

Burgos city (map) is best known for its cathedral, that forms part of its UNESCO World Heritage designation, and for being a town on the French Route in the Way of St. James.

+ Where we are (aytoburgos.es) • Getting around Spain (spain.info)