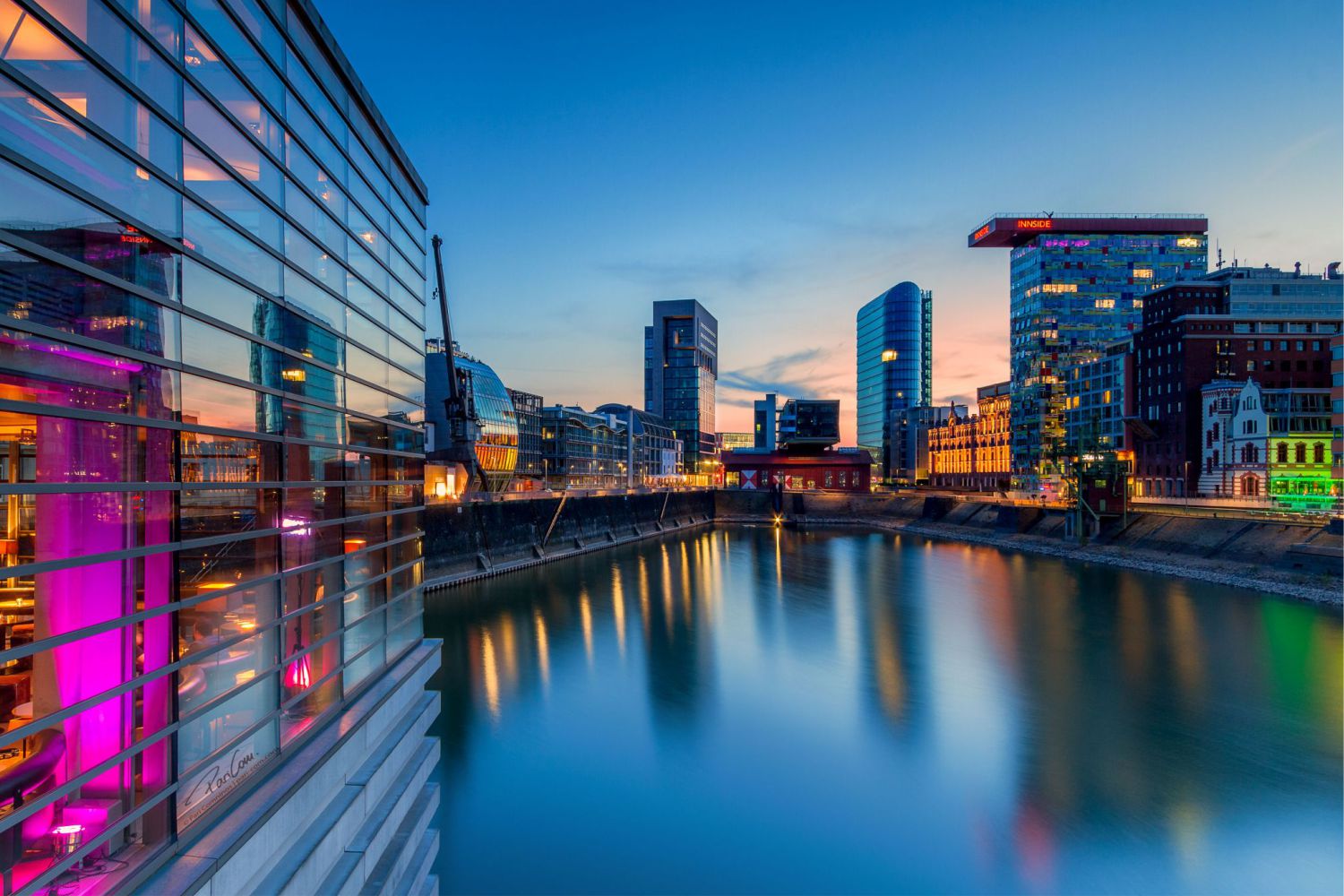 Düsseldorf (map) is a city on the River Rhine in western Germany and is the capital city of the state of North Rhine-Westphalia.

The Altstadt (literally “old town”, map) it belongs to central City District 1. The Düsseldorfer Altstadt is known as “the longest bar in the world” (längste Theke der Welt), because the small Old Town has more than 300 bars and discothèques; supposedly, each establishment’s bar-counter connecting to one next door.

Tourists are most likely to concentrate on District 1 (map), with its quarters of Stadtmitte (“city centre”) spreading northwest from the train station, as well as Altstadt (“old town”) and Carlstadt (map) on the Rhine.

Of the other districts and city parts, of interest to tourists may be the Benrath (Schloss Benrath, map) in District 9, with its grand palace and park and Lohausen (map) in District 5, which contains Düsseldorf’s international airport.

The quarter between Berliner Allee, Klosterstraße, Charlottenstraße and Graf-Adolf-Straße is known as the Japanese quarter (Japanisches Viertel, map), as the many Japanese companies tend to place their head offices there. This in turn results in the proliferation of typically Japanese service providers, including many restaurants and specialist stores.

The promenade on the bank of Rhine (map) is one of the most beautiful ones in Germany, and it is situated on the correct side, the right bank, because the sun shines onto this side all day long.

Burgplatz (Castle Square, map). The coffee-shop in the towers top offers a grand view onto the Rhine and the ships passing by. The square won an award as one of the nicest squares in Germany after World War II.

Schneider-Wibbel-Gasse (Tailor Wibbel Lane, map). A small lane inside the old town, connecting Bolkerstraße and Flingerstraße. It is packed with restaurants and bars, most of them offering Spanish-American and Latin American food (particularly Argentinian).

Carlsplatz (map). The Carlsplatz is the centre of Carlstadt and houses the city’s only permanent weekday market, featuring savory food, sweets, flowers as well as popular artworks.

Medienhafen (Media Harbor, map). At the southern end of the Rhine promenade you will find the newest landmark of Düsseldorf, the so called Media Harbour. The former harbour was transformed into a quarter with restaurants, bars, coffee shops, discotheques and hotels. Its flair is based on the mixture of old and new.

Every Christmas, the city of Düsseldorf uses the city centre to host one of the largest Christmas gatherings in Germany. The Christmas festival occurs every year from 17 November until 23 December.

With its extensive network of routes, the Rheinbahn will get you to your destination by tram, bus or underground railway.

The association with the Verkehrsbund Rhein-Ruhr (VRR – Regional Transport Association) means that uniform fares are charged throughout the region’s public transport systems and on the surcharge-free Deutsche Bahn trains.

With the DüsseldorfCard you have free use of public transports within the city as well as free entry to museums, reductions on city tours, boat tours, opera, theatre.

Information on almost all bus routes in Germany – BUSRADAR.com. >> (*Intercity buses in Germany)

AIRPORTS >    Düsseldorf International Airport, the third largest airport in Germany by passenger traffic, is within the city limits. As the distance is rather small and transportation links are good, the Cologne/Bonn Airport can be used as an entry point to Düsseldorf just as well.