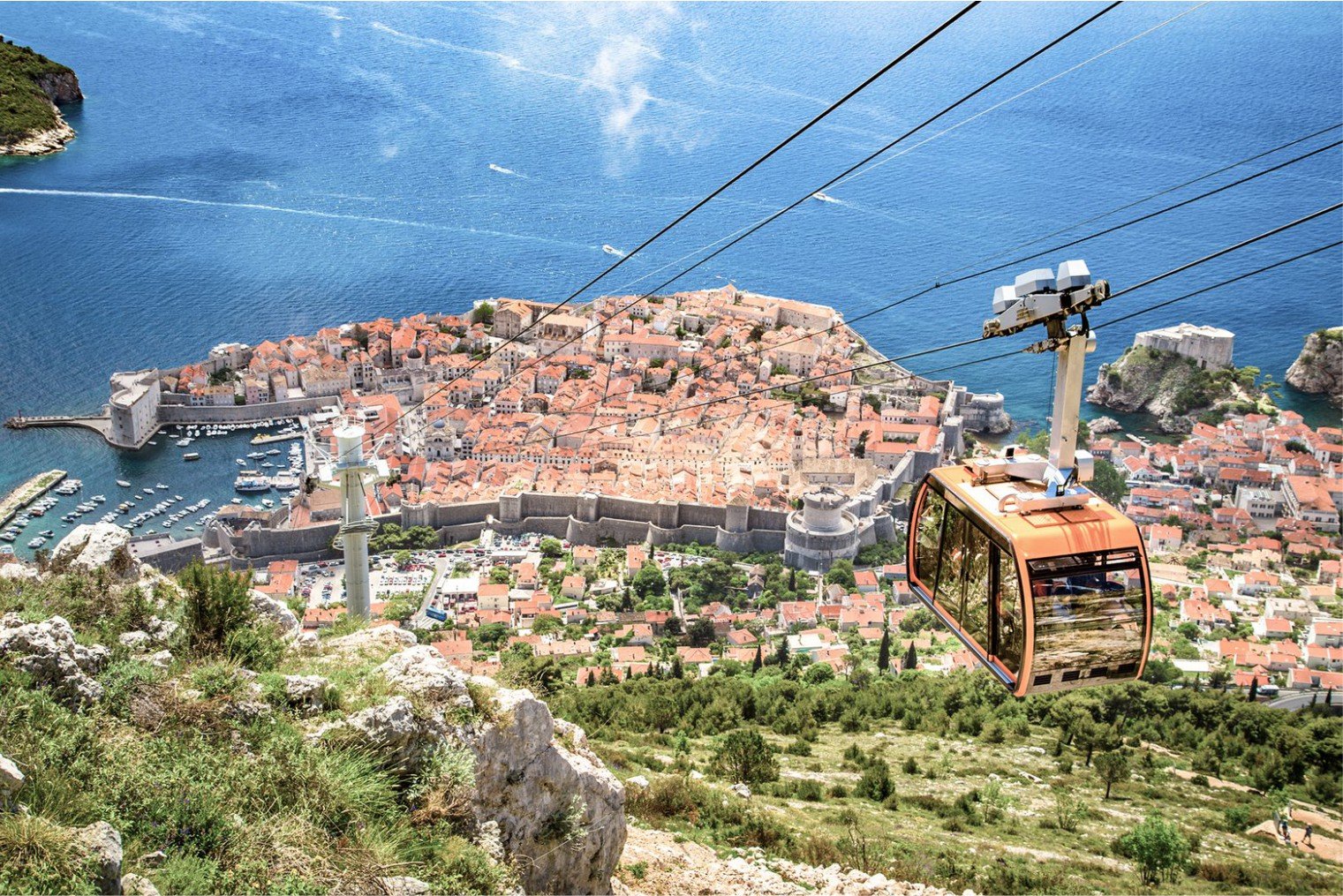 Dubrovnik (map) is an old city on the Adriatic Sea coast in the extreme south of Croatia. It is one of the most prominent tourist resorts of the Mediterranean, a seaport and the centre of the Dubrovnik-Neretva County. Dubrovnik is nicknamed “Pearl of the Adriatic” and is listed as a UNESCO World Heritage Site.

The city was built on maritime trade. In the Middle Ages it became the only city-state in the Adriatic to rival Venice. Today Dubrovnik is the proudest feather in Croatia’s tourist cap, an elite destination. Just like many destinations in the Adriatic, it is much more expensive and tourism centered than other places in Croatia.

George Bernard Shaw once said that “those who seek paradise on Earth should come to Dubrovnik and find it”. Royalty, presidents and diplomats have all favored the city. The late Pope John Paul II was a fan of Dubrovnik and was even made an honorary citizen.

The Old Town can be comparatively difficult to navigate on first appearances, as it really is a warren of little streets. The city is completely pedestrianised and easily small enough to get around on foot, some of the streets are a little steep though.

Dubrovnik is steeped in stunning architecture and sculptural detail, and boasts spectacular churches, monasteries, museums, and fountains. A multitude of typical towns and excursions include: the Elaphiti Islands (map), the attractive town of Cavtat (map), the Konavle valley (map), Mljet Island (map), Korčula Island (map), Ston (map). The neighbouring towns of Kotor and Perast in Montenegro or Mostar in Bosnia and Herzegovina also make for intriguing day trips.

*Sponza Palace (map). Gothic Renaissance palace, one of the few buildings that has maintained its form from before the catastrophic 1667 earthquake. Hosts historic archives.

*Rector’s Palace (map). The former palace of the Major Council houses a museum dedicated to the city’s history.

Pile Gate (Vrata od Pila, map), at the western end of the Placa Thoroughfare (Stradun). A convenient starting place for your stroll through the Old Town is the Pile Gate. Before entering the Old Town, Fort Lovrjenac (map), the first among many sites worth seeing in Dubrovnik, provides a good view of the Old Town and its wall.

Placa Stradun (Old town, map). The Stradun (Placa) is the central street of the city of Dubrovnik and is the place where the old city comes to life. During the day, explore the shades of the perpendicular streets and alleys on its sides, and during the night, take walks up and down the Stradun with an ice-cream in hand. The uniform Baroque architecture of the houses in Placa, with shops on the street level and their ‘knee-like’ entrances, got its present-day form in the restoration of the City taking place after the disastrous earthquake in 1667.

Big Onofrio’s Fountain (map). In the western (Pile) entrance of the old town. The fountain stairs are nowadays a favourite meeting place where both the tourists and pigeons take rest and refresh themselves with cool water.

Minceta Fort (map) is one of the most beautiful cultural attractions in Dubrovnik. It is situated on the northwest side of the city inside the City Walls. It was built according to the design of Renaissance builder Juraj Dalmatinac. St. Luke’s Tower you can see walking along the landward side of City Walls up to Ploce Gate. St. Luke’s Tower has protected the entrance to the Dubrovnik harbour throughout the history of the city.

Franciscan Monastery (map). This beautiful monastery with Baroque Church, houses a Romanesque cloister and the third oldest pharmacy in the world.

Cathedral of the Assumption of the Virgin Mary (map). This impressive building is in the Poljana Marin Držić. Supposedly, the original church was built with money donated by Richard the Lionhearted who survived shipwreck on his way home from the Third Crusade.

Dubrovnik’s most beloved church is St Blaise’s church (map), built in the 18th century in honour of Dubrovnik’s patron saint.

Walk on the walls around the old town, great views. It is highly recommended to visit the walls during the early morning hours or the late afternoon hours during mid-summer months as it can become hot.

Dubrovnik is surrounded by City Walls which are 2 km long and for which it is famous all around the world. Through the history City Walls were protection from the enemy, today Dubrovnik City Walls brings the visitors from the whole world who want to see this city- museum. There are 3 entrances to the City Walls: on Stradun by the Pile gate, by fort Saint John’s and at the Custom’s House gate.

BUS >   The main bus station is in Kantafig (map), near Port Gruz and the Tudjman bridge, 2.5 km northwest of the Old Town. A departure listing for the international bus station is available at the website of the city bus operator. Further details can be found online > autobusni-kolodvor.com.

Buildings and structures in Dubrovnik (wiki)