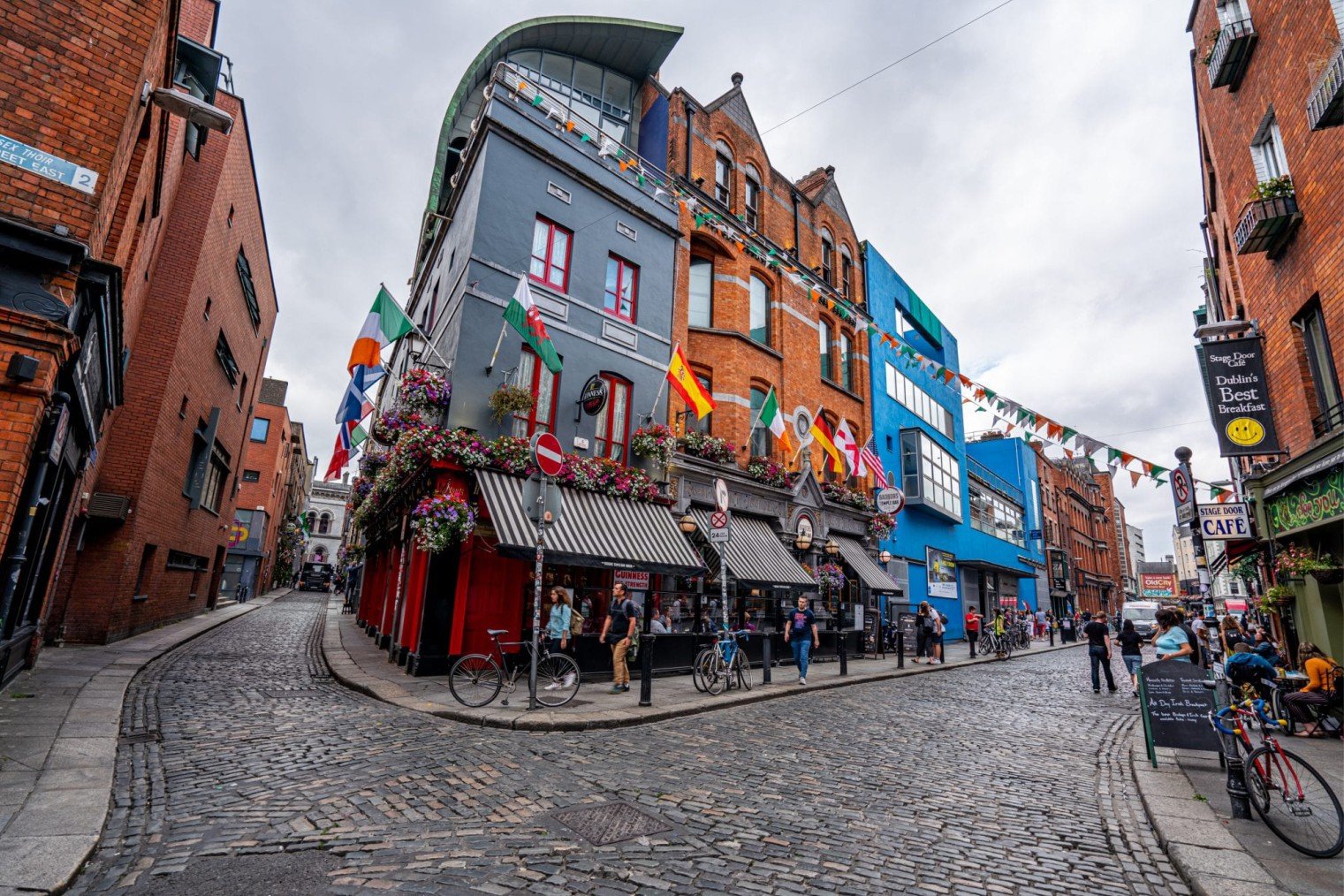 Dublin (map)  is the capital and largest city of Ireland. Its vibrancy, nightlife and tourist attractions are world renowned and it’s the most popular entry point for international visitors to Ireland. Nearly half of the Republic’s population lives in this metropolitan area.

Dublin has a vibrant nightlife and is reputedly one of Europe’s most youthful cities, with an estimate of 50% of citizens being younger than 25. The best known area for nightlife is *Temple Bar (map), south of the River Liffey. The area has become popular among tourists, including stag and hen parties from the UK

Dublin has many landmarks and monuments dating back hundreds of years, one of the oldest is Dublin Castle (map).

The Dublin Pass gives you free and fast track entry to thirty-some attractions in Dublin.

The south side of the river (map) includes Dublin’s most famous shopping street, the pedestrianised Grafton Street, which runs between St. Stephen’s Green and Trinity College. It has, along with its surroundings, been classified as an Architectural Conservation Zone. Alongside the historic Trinity College you will find Nassau Street (map) where there are many shops selling tourist-related items.

There is also an extensive shopping area on the north side of the river, in Dublin 1, centred on O’Connell Street and Henry Street (Ireland’s busiest shopping street). Just off Henry Street is Moore Street, which has a fruit, vegetable and fish market.

There are many excellent value Indian restaurants around the South William Street area (map), parallel to Grafton Street. A similar multi-cultural hotspot is Parnell Street in Dublin 1 (O’Connell Street-Gardiner Street, map), which has a dense concentration of Chinese and Asian restaurants extensively frequented by the ex-pat communities.

O’Connell Street (map) is the broad thoroughfare running north from the river, and the main district for budget accommodation. Merrion Square (map). This large stately square is filled with grassy and shady areas and surrounded by Georgian red-brick houses.

St Mary’s Pro-Cathedral (one block east of O’Connell St, map). Dublin’s Catholic cathedral, built in 1825. Catholicism was always the majority religion in Ireland, but its practice was forbidden until the 19th C. The official cathedral is Christ Church, so designated by the Pope in 1300, but taken over by the Protestants in the 16th C.

Trinity College (map) is the fine Georgian campus of the University of Dublin. It’s generally open to stroll around in daylight hours, but it is a working university, and most interiors are off-limits to tourists. You can visit the Chapel near the front (west) gate of the College. But the big attraction (ie mobbed) is the Old Library and Book of Kells.

General Post Office (GPO, map). The GPO is the headquarters of the Post Office in Ireland, built in Neo-Classical style 1814-1818.

National Museum of Ireland – Archaeology & History (map). Excellent display of Ireland’s artefacts from prehistory through the Viking era to independence. Leinster House (map). This opulent Georgian mansion is in the same block as the Archaeology Museum. Designed by Cassels, it was built in 1745 as the residence of the Duke of Leinster at a time when the southside was unfashionable.

Almost all of Ireland is within 2-3 hours travel from Dublin, and the transport routes converge on the city. People even make day-trips to the Aran Islands (map) out west or Giant’s Causeway (map) in the north, a mad way to experience them.

List of museums in the Republic of Ireland (wiki)

List of national parks of the Republic of Ireland (wiki)