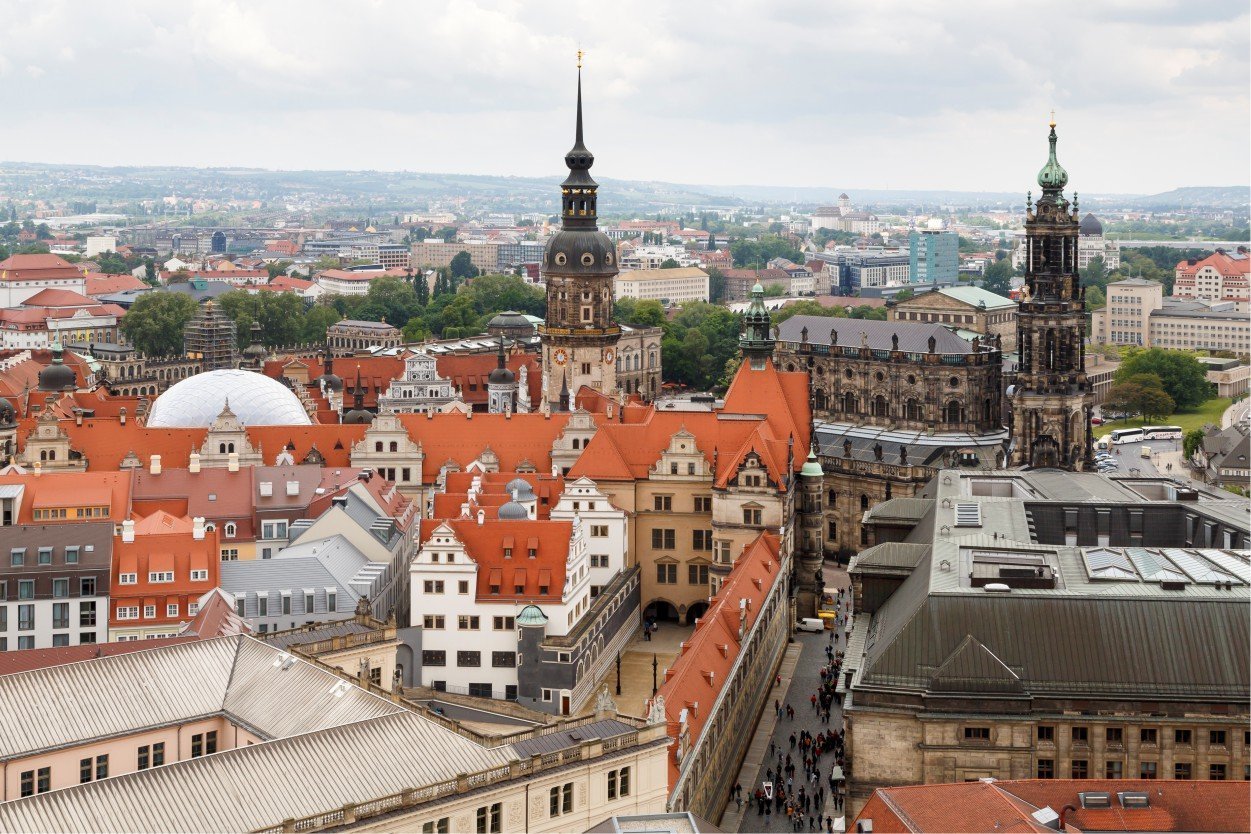 Dresden (map) is the capital of Saxony (Sachsen). It’s often referred to locally as Elbflorenz, or “Florence on the Elbe”, reflecting its location on the Elbe river and its historical role as a centre for the arts and beautiful architecture – much like Florence in Italy.

Dresden is over 800 years old, having become a city as long ago as 1206. Many Saxon princes, dukes and kings called Dresden home.

Dresden is a very beautiful, light-spirited city, especially in summer, when you can appreciate the serene setting of the historic centre. Dresden is one of the greenest cities in all of Europe, with 62% of the city being green areas and forests. Dresden has some 13 000 listed cultural monuments and eight districts under general preservation orders.

Altmarkt-Galerie (map). A huge shopping centre which practically fills the western side of Seestraße and has an appearance of being many separate buildings, but they are in fact all interconnected. You can find everything from premium boutiques to very affordable shops there.

On behalf of the city farmers markets are organized throughout the week, selling regional products at various locations. Neustädter Markthalle (map) + Fleamarket (map). Every Saturday there is a fleamarket on the banks of the Elbe by the Albertbrücke, with all kinds of sellers: semi-professionals, grandmothers selling homemade jam and children selling their old toys laid out on blankets.

Fürstenzug (wiki, map)  is a large mural of a mounted procession of the rulers of Saxony. It was originally painted between 1871 and 1876 to celebrate the 800th anniversary of the Wettin Dynasty, Saxony’s ruling family.

The Dresden Castle (map) was the seat of the royal household from 1485. The wings of the building have been renewed, built upon and restored many times. Due to this integration of styles, the castle is made up of elements of the Renaissance, Baroque and Classicist styles.

The Zwinger Palace (map) is across the road from the castle. It was built on the old stronghold of the city and was converted to a centre for the royal art collections and a place to hold festivals. Its gate by the moat is surmounted by a golden crown.

*Dresden Cathedral (map) Always the most important Catholic church of the city. Frauenkirche (map). You can walk up to the viewing platform on the dome and enjoy a great view of the city.

Semperoper (Saxon State Opera and concert hall, map). One of the most beautiful opera houses in the world. The acoustics and the Staatskapelle orchestra are marvellous. Its history saw many operas of Wagner and Strauss having their first nights there.

Staatliche Kunstsammlungen Dresden (map). It is one of the most renowned and oldest museum institutions in the world, originating from the collections of the Saxon electors in the 16th century. Today, the Dresden State Art Collections consists of fifteen museums. Most of them are located in the Dresden Castle, the Zwinger and the Albertinum.

Pfunds Molkerei (map). A dairy shop which is in the 1998 Guinness Book of World Records as the most beautiful dairy in the world. Decorated with 247 m² of handmade tiles.

A big event each year in June is the Bunte Republik Neustadt, a culture festival lasting three days in the city district of Dresden-Neustadt. Bands play live concerts for free in the streets and there are refreshments and food.

RAIL >   Dresden Hauptbahnhof (map). At the southern end of Dresden’s main shopping street, Prager Straße, about 2 km from the historic old town. Dresden-Neustadt (map). This is the other big train station. It is just north of the New Town and also offers very good train connections, as most trains run through there, too. Deutsche Bahn | German Rail Pass • VGN • RailEurope >> (*Rail travel in Germany)