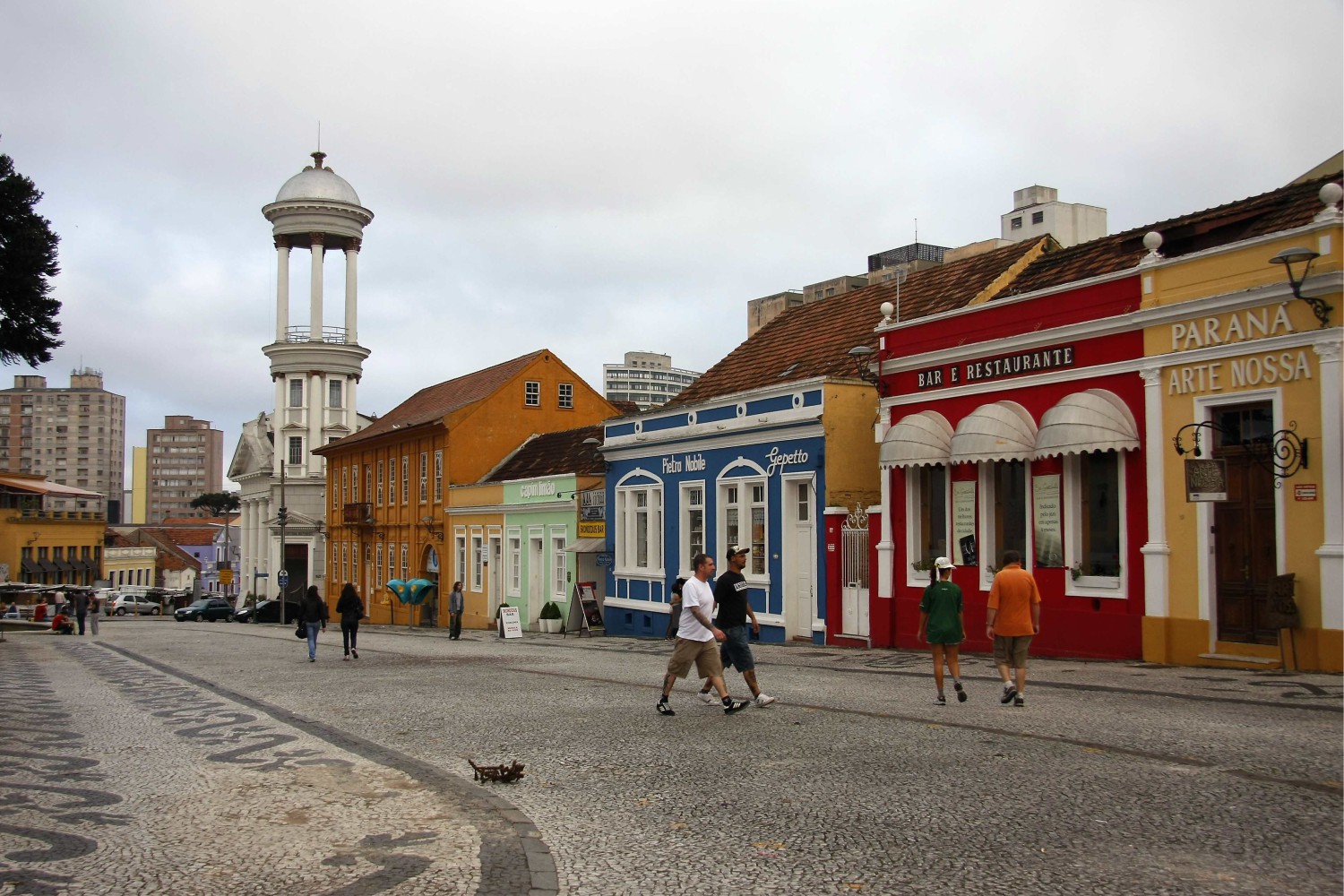 Curitiba (map) is the capital of *Paraná. If you’re heading for Iguaçu Falls from Rio de Janeiro or São Paulo, it’s worth stopping by for a day or two.

Curitiba is one of the few Brazilian cities with a very high Human Development Index and in 2010 it was awarded the Global Sustainable City Award. According to US magazine Reader’s Digest, Curitiba is the best “Brazilian Big City” in which to live.

There is a great cidade velha (old city, map) in the center which is in a very good state, considering the fact that it’s been around for over 3 centuries. There is a huge arts and crafts fair every Sunday in the old city that is well worth visiting.

Ópera de Arame / Teatro De Arame (map) – one of the emblematic symbols of Curitiba, with tubular structure and transparent ceiling, of great beauty. Inaugurated in 1992, it caters for all types of shows, between lakes, typical vegetation and cascades, on a unique landscape.

Tiradentes Square (map), the main square in Curitiba and also its birthplace. On the north end of this square, lies Basilica Cathedral Minor of Our Lady of Light, centennial in 1993. Anciently known as Largo da Matriz, the square is the city’s initial landmark.

Rua 24 Horas (24 Horas Street, map). The Street that never sleeps is the synthesis of a city which also never sleeps. It is 120 meters long and 12 meters wide. There are 34 shops that are open eternally, from the daybreak sandwich to the bank withdrawal; from the pharmacy to the florist; from books to milk for the children.

The Serra Verde Express, a train to the coastal town of *Morretes (map), makes an excellent day trip and is for many tourists the main reason to visit Curitiba. On Sundays (?) the train continues to Paranaguá, although the last bit between Morretes and Paranaguá is not very scenic.

Curitiba receives ample rain, there’s no dry season, and it is rare to go more than 5 days without showers. Periods of a steady light rain or drizzle may last several weeks, typically foggy and grey, somewhat similar to London weather. The months when it usually rains more in Curitiba are between October and March.

BUS >   Bus schedules and itineraries can be consulted either from Google Maps or the city website (machine-translated into English).

Curitiba’s Bus & Train Station (Estaçao Rodoferroviária, map) is a large station with 3 terminals (train terminal, interstate bus terminal and intrastate bus terminal) provides scheduled bus service from Curitiba to all over Brazil. The bus is the best way to come from or go through São Paulo and Florianópolis, since the travel doesn’t last too long.

RAIL >   vale.com. Curitiba has no scheduled passenger train service. However, there is a touristic train route that goes to Paraná State’s ocean coast, reaching its end in Paranaguá. It is definitely a worthwhile ride for those wanting to see natural and Atlantic Forest scenery, with many waterfalls, cliffs, peaks and historic sites.