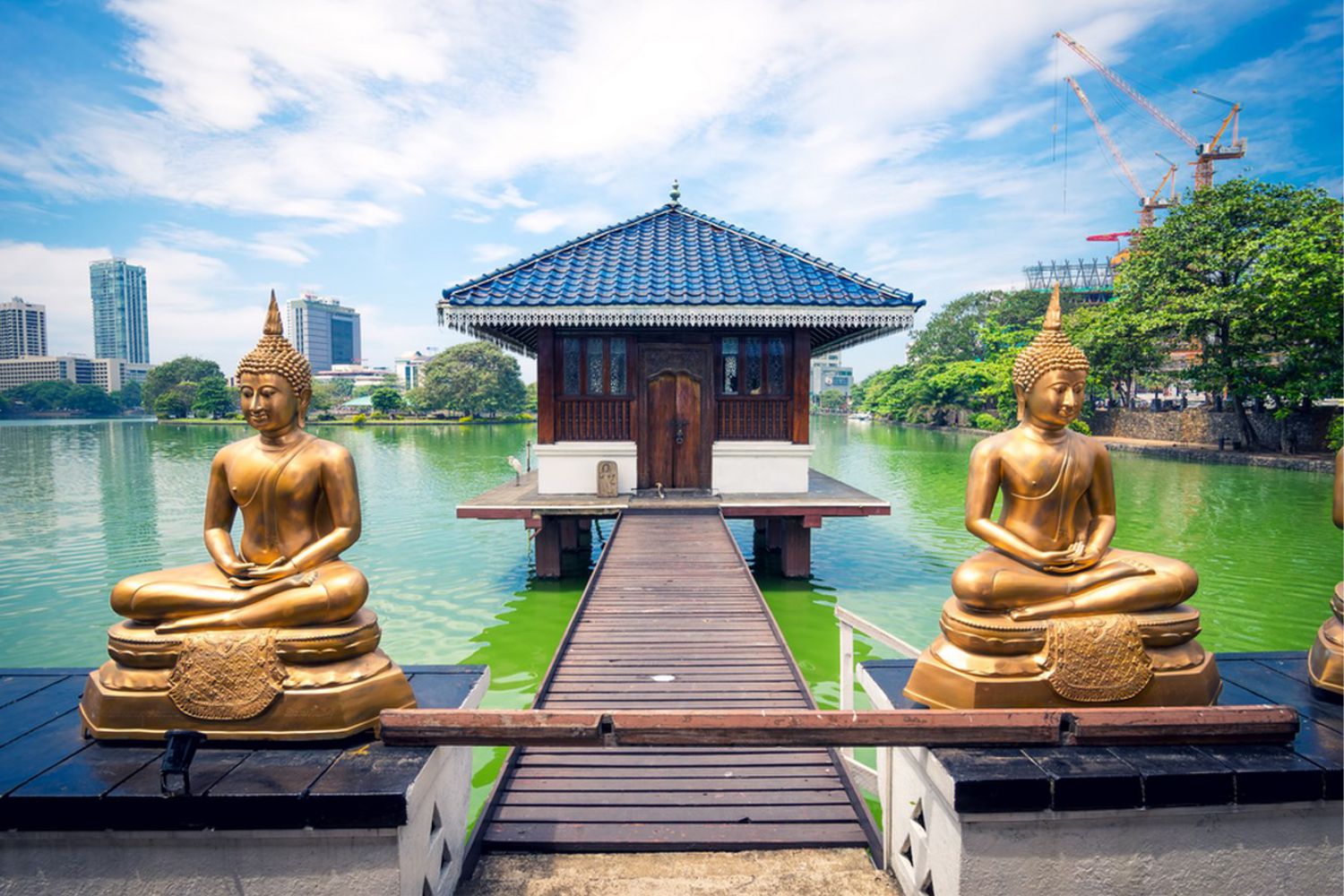 Colombo (map) is the largest city and commercial capital of Sri Lanka, and still perceived by many as the capital though the suburb of *Sri Jayawardenepura Kotte (map) is now the official capital.

Just like another typical South Asian big city, Colombo is congested, noisy, busy, and vibrant with a mixture of modern life and colonial buildings.

For the best weather, visit during the north-east monsoon season, including the driest months December to March. There’s also a shorter dryer period in July and August.

*Colombo Fort (map) Known as Kolonthota, the area became notable as the site of the first landings of the Portuguese in the early 16th century and became one of their trading posts in the island. Now is the central business district of Colombo.

Sri Lankan mines produce some fine gemstones, especially sapphires and moonstones, and Colombo is one of the main places where they are marketed. Both cut but unmounted stones and finished jewellery are sold in many places. The beach town of Beruwela, about 55 km to the south, also has a large gem market. Ratnapura, 100 km south, is in the centre of the main gem mining area and also has large markets.

*Gangaramaya Temple (map). One of the most important temples in Colombo. The temple’s architecture is an eclectic mix of Sri Lankan, Thai, Indian and Chinese styles. And adjoining it just to the west is the Seema Malaka, another Buddhist temple complex that sits upon Beira Lake, along with Gangamaraya Park.

Kalani Raja Maha Viharaya (map). Located about 9 km away from Colombo, the Kelaniya Raja Maha Viharaya is one of the most significant Buddhist temples in Sri Lanka. The temple had been built more than 2,000 years ago and contains images of reclining and preaching Buddha along with frescoes depicting incidents from his life.

*Jami-Ul-Alfar Mosque (map). This historic mosque is a popular tourist site. Jami-Ul-Alfar Mosque was built in 1909 by the Pettah Muslim community to fulfill their required five-times-daily prayer and Jummah on Fridays. It is one of the oldest mosques in Colombo.

*Slave Island (map) is a commercial suburb popular with locals and visitors alike with shopping, eating and drinking places as well as many hotels. People of many cultures and religions including Malay, Sinhalese, Tamil and Burghers (Eurasian Sri Lankans), call the suburb home.

The Pettah Market (map). Fruits to clothes to electronics at wholesale prices. Even if you don’t buy anything, Pettah, or Colombo 11 is an experience in itself being a very typical, loud and crowded oriental market place full of all sorts of odds, ends and junk. In the Pettah Market area, some street vendors actively ask passers-by, foreigners and locals to view products they are selling though polite refusal is generally accepted.

Mount Lavinia (map) is about 20 minutes away from the city and has a good deal of nightlife. The beach and the friendly people draw plenty of visitors. Along the beach are a variety of restaurants that serve alcohol have food to suit every budget.

BUS >   The Sri Lanka Transport Board is the government-owned bus service. For those on a budget buses are everywhere. They’re sometimes crowded and uncomfortable, but they get you around for almost nothing.

RAIL >   Sri Lanka has an extensive railway system serving all major towns and cities in the island except for the North. Travel by train is itself a journey to remember, be it travelling to Central Sri Lanka or travelling on the coastal line is just amazing.

Highly recommended to travel by train outside Colombo. The Hill train to Badulla is an amazing journey. Preferably choose the express trains, and try to get a reservation beforehand, if you can. >> Sri Lanka Railways. (+ more info: seat61.com)

AIRPORTS >   airport.lk >> The international airport is closer to Negombo (map) than to Colombo, so if you’re arriving late, it might be a better option to head to Negombo for the night instead. Confirm the cost of any mode of transport before using it.