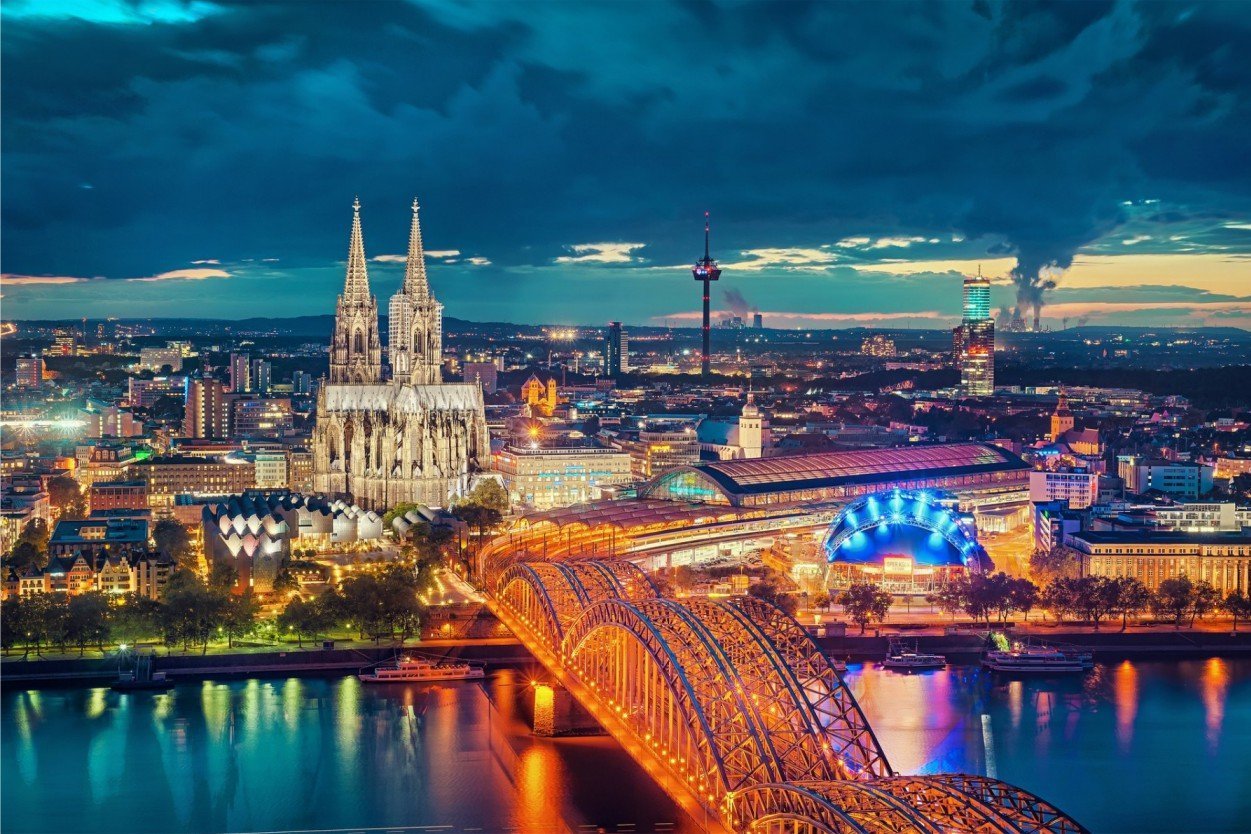 Cologne (map) is one of the nation’s media, tourism and business hotspots, and is considered one of the most liberal cities in Germany. Cologne has a rich history, reaching back to the time of the ancient Roman Empire, when it was founded.

A wealth of architectural heritage can therefore be found across the city ranging from pre-Christian times to strikingly modern buildings, with a high concentration of Romanesque and Gothic architecture, culminating in the magnificent Catholic Cologne Cathedral (Dom, map).

The city’s medieval Catholic Cologne Cathedral (Kölner Dom, map), the third-tallest church and tallest cathedral in the world, constructed to house the Shrine of the Three Kings, is a globally recognized landmark and one of the most visited sights and pilgrimage destinations in Europe.

Cologne is a major cultural center for the Rhineland; it hosts more than 30 museums and hundreds of galleries. Exhibitions range from local ancient Roman archeological sites to contemporary graphics and sculpture. The Cologne Trade Fair hosts a number of trade shows such as Art Cologne, Dmexco, imm Cologne, Photokina and Gamescom, a leading video games fair.

Agnesviertel (map) most notably in the bohemian Agnesviertel, you can find independent designers, bookshops, bars, and art galleries

Cologne has an Little Istanbul in Keupstraße (map) that has many Turkish restaurants and markets.

Cologne Cathedral (Kölner Dom, map) is the city’s most famous monument and the Cologne residents’ most loved landmark. It is a Gothic church, started in 1248, and completed in 1880. In 1996, it was designated a World Heritage site; it houses the *Shrine of the Three Kings, which supposedly contains the relics of the *Three Magi.

Twelve Romanesque churches: These buildings are outstanding examples of medieval church architecture. The origins of some of the churches go back as far as Roman times, for example St. Gereon (map), which was originally a chapel in a Roman graveyard.

The Cologne City Hall (Kölner Rathaus, map), founded in the 12th century, is the oldest city hall in Germany still in use.

Of the twelve medieval city gates that once existed, only the Eigelstein-Torburg (map), the Hahnentor (map) and the Severinstorburg (map) still stand today.

Romano-Germanic Museum (map). It has a large collection of Roman artifacts from the Roman settlement of Colonia Claudia Ara Agrippinensium, on which modern Cologne is built.

Museum Ludwig (map) houses a collection of modern art. It includes works from Pop Art, Abstract and Surrealism, and has one of the largest Picasso collections in Europe. It holds many works by Andy Warhol and Roy Lichtenstein.

Cologne Carnival is one of the largest street festivals in Europe. In Cologne, the carnival season officially starts on 11 November at 11 minutes past 11 a.m. with the proclamation of the new Carnival Season, and continues until Ash Wednesday. However, the so-called “Tolle Tage” (crazy days) do not start until Weiberfastnacht (Women’s Carnival) or, in dialect, Wieverfastelovend, the Thursday before Ash Wednesday, which is the beginning of the street carnival.

The highlight of carnival is Rose Monday (Rosenmontag), two days before Ash Wednesday. All through these days, Cologne folks go out masqueraded.

CityMapper – Cologne & Dortmund | The ultimate transport app and technology for mobility in cities.