Statue of Jesus Christ in Rio 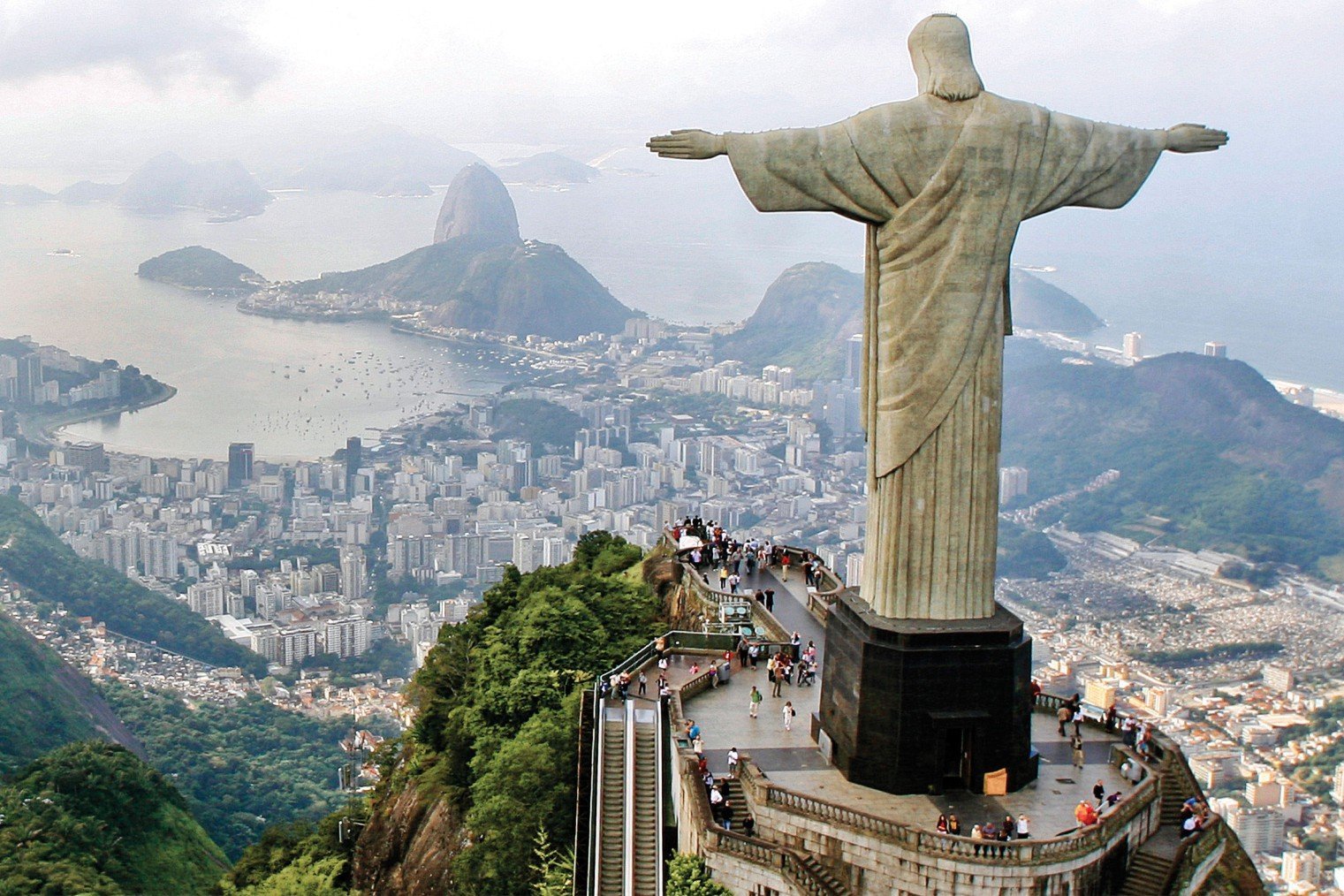 The statue weighs 635 metric tons, and is located at the peak of the 700-metre (2,300 ft) Corcovado mountain in the Tijuca Forest National Park overlooking the city of Rio de Janeiro. A symbol of Christianity across the world, the statue has also become a cultural icon of both Rio de Janeiro and Brazil, and was voted as one of the *New Seven Wonders of the World.

To avoid crowds, it is recommended to visit Corcovado Mountain early in the morning. The easiest and most efficient way to get there is by Uber. Uber has a great feature called ‘juntos‘ where you can share a ride with other passengers and save some money (actually it’s almost a half of the regular price).

When using public transport, it depends on where are you staying, but you must get to a small bus terminal Cosme Velho (you can jump off one stop before at São Judas Tadeu which is right across Trem do Corcovado station, map), the closest stop to the foothill of Corcovado Mountain.

If you don’t have a direct bus nearby your hotel, the closest metro station is Largo do Machado (still 40 minutes walk from the base), so from here you can take a bus number 580 going to Cosme Velho.

You can be also picked up by one of two official vans cruising around the city every day. The official pick up point is at Praca do Lido in Copacabana (map), next to the metro at Lago do Machado and at Città America in Barra da Tijuca.

From both places, vans leave approximately every 15 minutes, and the price already includes the return transport and the entry fee.

There are three ways how to get to Christ the Redeemer. You can take a train, van or hike. Because the cog train option is the most popular one, expect queues, especially in high season between December and March. To avoid queues, buy your ticket online in advance for the exact time, so you won’t have to wait long.

Brazil’s New Statue of Jesus Will Be Taller Than Rio’s Christ the Redeemer (travelandleisure.com). Located in the small town of Encantado in Brazil’s southern state of Rio Grande do Sul, the new attraction hopes to bring more travelers to the area.

Rio is one of the most visited cities in the Southern Hemisphere and is known for its natural settings, Carnival, samba, bossa nova, and balneario beaches such as Barra da Tijuca (map), *Copacabana (map), *Ipanema (map), and *Leblon (map).

BUS >   In Rio de Janeiro, buses are the main form of public transportation. rioonibus.com. Busca Ônibus | Bus Stations (*Bus transport in Rio de Janeiro). Most popular lines for tourists are 583 and 584 (from Copacabana and Ipanema to Corcovado railway station), as well as 464 and 435 (from Copacabana to Maracanã). Buses 511 (Ataulfo de Paiva) and 512 (Bartholomeu Mitre) are also popular as they take you to Urca for the station to take the cable car up the Sugarloaf mountain.

WATERWAYS >   In northern Brazil, it is possible to travel many distances by boat. In fact, the boat is the main and most accessible means of transport to get around the Amazon, since the Amazon Forest is cut by many rivers and some cities are inaccessible by road. The best boat services in the country are in the Amazon, where you can ride on speedboats and comfortable yachts or small wooden boats. grupoccr.com.br