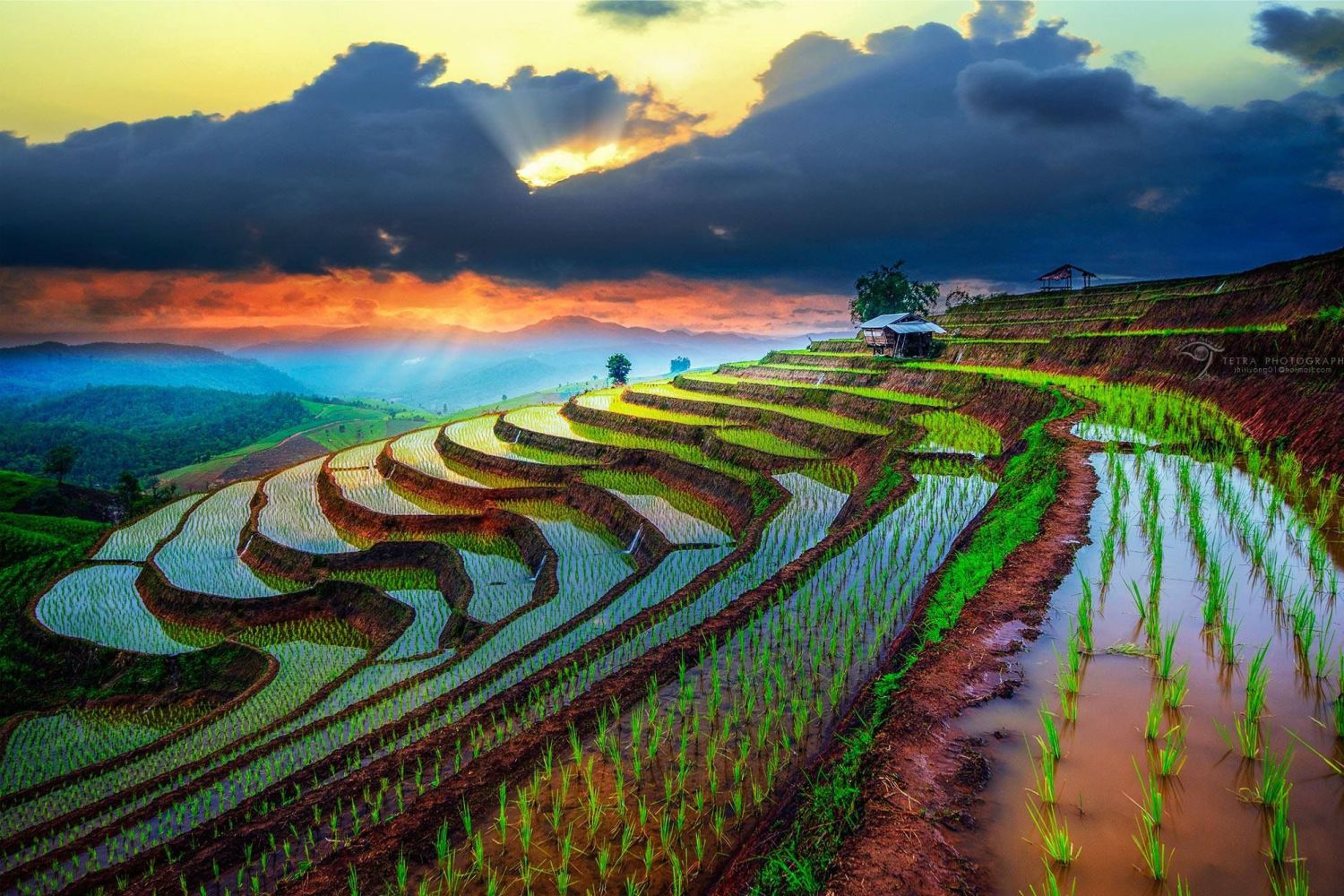 Chiang Mai (map) is the hub of northern Thailand. Founded in 1296 CE, Chiang Mai is a culturally and historically interesting city, at one time the capital of the ancient Lanna kingdom. In the rolling foothills of the Himalayas 700 km north of Bangkok, until the 1920s it could only be reached by an arduous river journey or an elephant trek. This isolation helped preserve Chiang Mai’s distinctive charm, which remains intact.

Inside Chiang Mai’s remaining city walls are more than 30 temples dating back to the founding of the principality, in a combination of Burmese, Sri Lankan, and Lanna Thai styles, decorated with beautiful wood carvings, Naga staircases, leonine and angelic guardians.

Many who come here return again and again, or stay for years when they had meant to stay only a few weeks. There’s an energy in the city that captivates those who visit, whether they seek a trekking adventure or a spiritual awakening as they travel from temple to temple.

Chiang Mai’s nightlife is the most happening in the north, although still a far cry from Bangkok’s hot spots. The busiest night life zones are near Tha Phae Gate (map), Loi Kroh Rd (map) and along Charoen Rat Rd (map) on the east bank of the Ping River.

Night Bazaar (ไนท์บาร์ซ่า, map). A huge indoor/outdoor commercial maelstrom centred on the Night Bazaar Building on the west side of Changklan Rd. The Night Bazaar can be considered an entire region of the city as it incorporates the Anusarn and Kalare Markets as well. It can take a concerted effort to find something different among the near identical stalls selling tourist-oriented sunglasses, T-shirts, textiles, watches, luggage, caps, and anything else small enough to sell from a market stall. You rarely see Thai people shopping here. On the east side of the street you will find the Anusarn and Kalare Markets with wider offerings.

Sompet Market (map). Just south of the moat’s northeast corner. Mostly a fruit and veg market for locals, but close at hand to the many guesthouses in the area so a good place for visitors to stock up on grub. Lots of prepared meat and meals as well.

*Chiang Mai Flower Festival. Staged every year during the first weekend in February.

Accommodation in Chiang Mai is generally cheap, even by Thai standards. All types of lodging are available from inexpensive guest-houses with little or no service to the typical high rise hotels and elaborate garden resorts.

Phu Ping Palace (Royal Winter Palace, map). This royal winter palace has lavishly landscaped gardens and is open to the public. Dress code strictly applied. The palace itself (built in 1961) is not particularly exciting, but the extensive gardens are picturesque with some amazing plant life, including carefully tended tropical flowers, centuries-old trees and giant bamboo.

Queen Sirikit Botanic Garden (map). Thailand’s oldest and foremost botanical garden. Dedicated to the conservation of Thai flora, it holds collections of, and carries out research on rare and endangered species. Lovely gardens in a mountain foothills setting.

Mae Sa Waterfall (map). Set in the *Doi Suthep-Pui National Park on the Samoeng Loop. The path winds up for almost 2 km to the 8 tiers of cascades. There are many secluded areas off the trail for picnics. Crowded on weekends and holidays.

Chiangmai Foreign Cemetery 1898 (map). A place of history and remembrance. A statue of Queen Victoria is overlooking the place.

*Wat Phra Singh (วัดพระสิงห์วรมาวิหาร, map). Probably Chiang Mai’s best-known temple, housing the Phra Singh image, completed between 1385 and 1400. Of most historical interest is the Wihan Lai Kham in the back, featuring Lanna-style temple murals and intricate gold patterns on red lacquer behind the altar. The walls of the chapel are covered with murals illustrating Lanna customs, dress and scenes from daily life. The lovely Lai Kam chapel houses the revered Phra Singh Buddha image. The temple is most attractive during Songkran, the Thai New Year, in mid-April.

*Wat Chedi Luang (วัดเจดีย์หลวงวรวิหาร, map). Almost in the centre of Chiang Mai are the remains of a massive chedi that toppled in the great earthquake of 1545. The temple was originally constructed in 1401 on the orders of King Saeng Muang Ma. A magnificent testament to Lanna (northern Thai) architecture and art, restored sections hint at its former glory. Wat Chedi Luang is also home to the “Pillar of the City”, a totem used in ancient Thai fertility rites.

*Wat Chiang Man (วัดเชียงมัน, map). The oldest temple in the city. Presumed to date from the year Chiang Mai was founded (1296), it is famed for two Buddha statues, which are about 1,800 and 1,000 years old, respectively. Enshrined in Wat Chiang Man is a tiny crystal Buddha called Pra Seh-Taang Kamaneeee, which is thought to have the power to bring rain. Another image, called Phra Sila Khoa, reflects the fine workmanship of Indian craftsmen from thousands of years ago.

*Wat Phrathat Doi Suthep (วัดพระธาตุดอยสุเทพ, 18 km from the city, map). The quintessential image of Chiang Mai with its large gilded chedi, visible from the city on a clear day. Built in 1383 during the Lanna Thai period. The climb may be a strain in the high altitude’s thin air for the less fit, so you may opt to take the cable car for 20 baht. For the Visaka Bucha holiday around May each year, it is traditional for people to walk from the zoo to the temple and vast numbers make the pilgrimage to the top, which takes around 4–5 hours.

Wat Si Suphan (Silver temple, map). The Ubosot building of the temple is completely covered with a layer of silver, particularly impressive when illuminated in the evening. Decorated with detailed ornaments. Sometimes silversmiths on site are adding or renewing the decoration. Conversations with monks and an introduction to meditation are also offered in the temple. Women are not allowed to enter the interior of the Ubosot building.

CentralFestival (map). Measuring 250,000 m², with 250 shops, it rivals the Central Plaza Chiang Mai in size. Central Festival opened in late 2013 and includes an ice rink, IMAX and 4DX cinemas, dozens of restaurants and shops on five floors. A food court on the fifth floor as well as at the ground floor level (with better prices).

Central Plaza Chiang Mai Airport (เซ็นทรัล แอร์พอร์ต พลาซ่า, map). On five floors, with a food court, banks/ATMs, and multi-screen cinema. It also has a Cultural Centre attached selling many crafts, a large food market, and an extensive selection of Thai ready-to-eat stalls in the basement.

A motorbike is a convenient and cheap way to get around the city or reach the outlying sights. There is an abundance of near indistinguishable rental companies in the city, though most guesthouses can arrange rentals as well.

RAIL >   Services from Bangkok leave on a regular daily schedule and take 12–15 hours to reach Chiang Mai. If you go by night train (recommended), try to choose one which arrives late to get an opportunity to see the landscapes. They are impressive, with bridges and forests and villages and fields.

AIRPORTS >   Chiang Mai International Airport. Handles both domestic and regional international flights. The route from Bangkok is one of the busiest in the country (Thai Airways flies daily almost every hour, with additional flights in the peak tourist season). The airport is 3 km southwest of the city centre, 10–15 minutes away by car.

Airports of Thailand. Bangkok has two major airports: Suvarnabhumi Airport which is the main airport and serves most full-service carriers, and the smaller Don Mueang International Airport which primarily serves low-cost carriers.