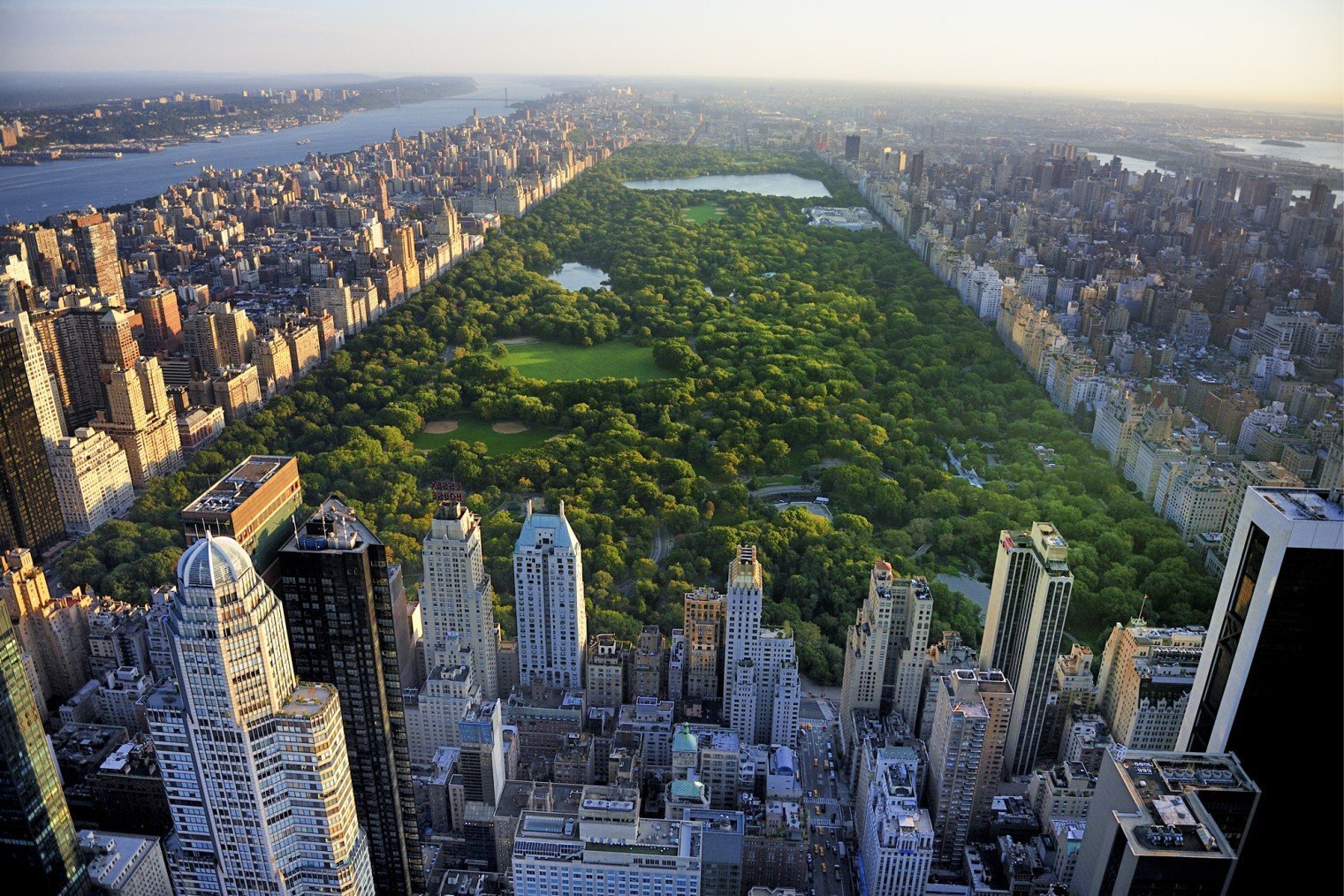 The park is a convenient oasis for New Yorkers escaping from their skyscrapers and is well-known globally after its appearance in many movies and television shows. Here you will find calm lakes, babbling brooks, quiet woods, hidden meadows and lush lawns full of sunbathers and picnickers, in this welcome respite from the bustle of the island.

The area between the 86th and 96th Street transverses is mostly occupied by the Onassis Reservoir. Directly south of the Reservoir is the Great Lawn and Turtle Pond (map). The Lawn is bordered by the Metropolitan Museum of Art (map) to the east, Turtle Pond to the south, and Summit Rock to the west.

The southernmost part of Central Park, below Terrace Drive (map), contains several children’s attractions and other flagship features. It contains many of the structures built in Central Park’s initial stage of construction, designed in the Victorian Gothic style.

Strawberry Fields (map), Central Park West at 72nd Street. So named in 1981 in memory of John Lennon, the former Beatle, who was murdered close by outside his home in the Dakota building.

Belvedere Castle (map), one of the highest points in the park, the castle provides excellent views of Central Park, particularly to the north. It is a popular spot for photography and contains a visitor center and a nature conservatory.

There are 21 children’s playgrounds in Central Park. The largest, at three acres (12,000 m2), is Heckscher Playground (map).

Central Park is dotted with vendors all over. A quick hotdog, pretzel, soda, or ice cream is always available. There are several cafes in the park but, because there are no street addresses, you may have trouble finding them. Many of the cafes are seasonal and operate from about early April to late October.

Central Park is accessible by subway, with the A, B, C, D, and 1 trains stopping at Columbus Circle (map), and the B and C local trains continuing along Central Park West, with stops at 72nd St., 81st St. (under the American Museum of Natural History, map), 86th St., 96th St., 103rd St., and 110 St. Somewhat further west, the 1 (local) and 2/3 (express) lines travel up Broadway, though that avenue angles further and further to the west northward from Columbus Circle.

CityMapper – NYC | The ultimate transport app and technology for mobility in cities.

+ Getting Around (nycgo.com) • Public Transportation • Information about taxis (nyc.gov)

Despite a reputation for being dirty, the subway, which operates 24 hours a day, is the fastest and best way to travel around four boroughs of the city; it hasn’t reached Staten Island, which is served by a separate railway.

RAIL >   Those starting from a nearby suburb can reach NYC by NJ Transit • Long Island Rail Road • Metro-North Railroad. Amtrak also offers comfortable, convenient service to NYC from cities near and far.

List of arches and bridges in Central Park (wiki)