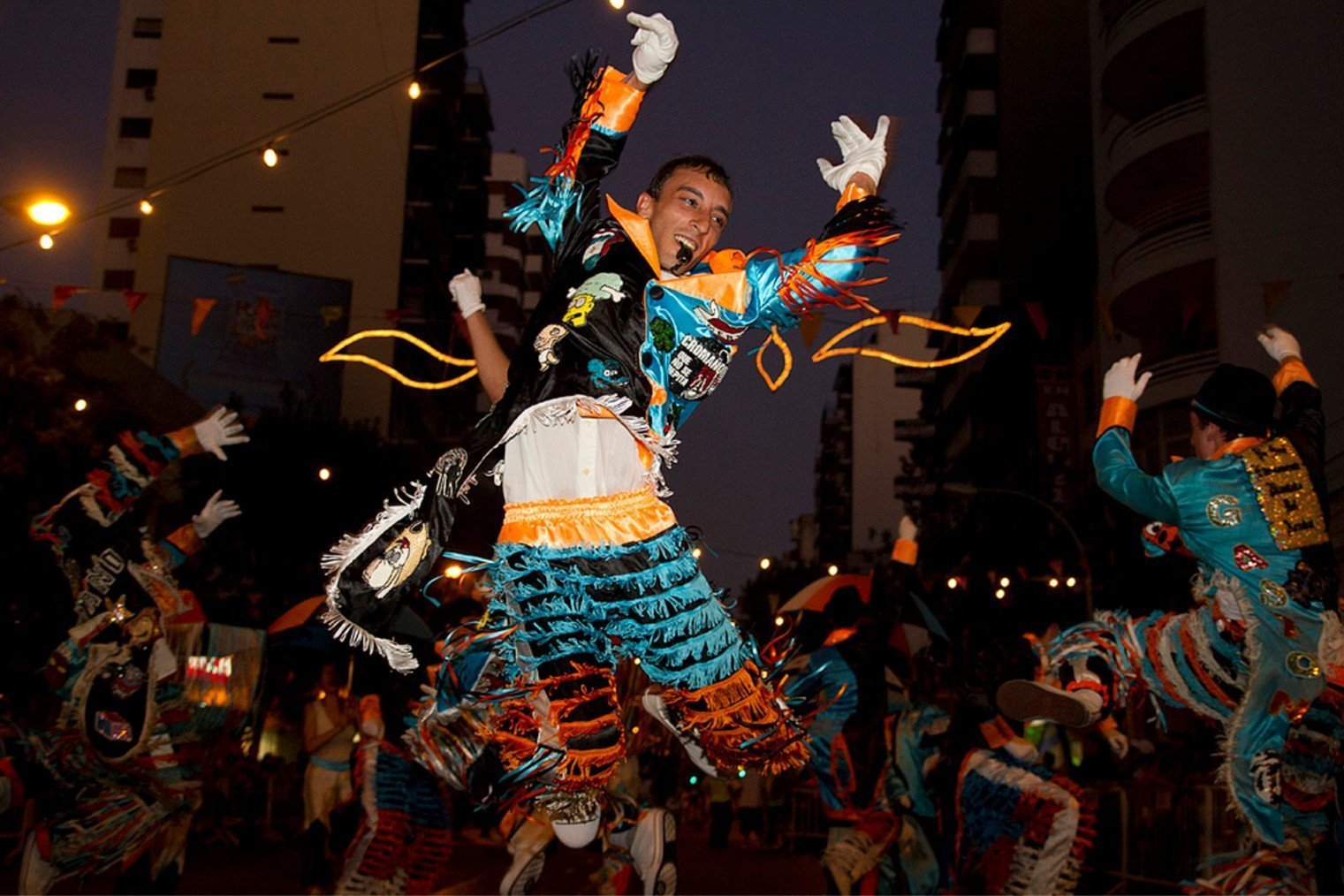 Buenos Aires Carnival (Carnaval de Buenos Aires or Corso de Buenos Aires) is an annual event that takes place during the Carnival festivities, usually at the end of February, on the streets of Buenos Aires. The two-day event features murga parades, colourful costumes, water bombs and many other amusement activities. All events are free.

Carnival centres around the murgas, neighbourhood groups that dress in brightly coloured costumes and perform rhythmic music and dance in the streets, often including commentary on life, current affairs and the neighbourhood.

The grand finale to the carnival celebrations comes in the form of a huge party on Av. de Mayo (map), one of the city’s most famous streets. (*The event will be cancelled if it rains).

What’s different about Buenos Aires’ carnival is that it isn’t one long parade — the action happens within the confines of 35 gated-off street sections around the city. This has the benefit of dispersing the crowds so no one is stuck way out straining their neck to see who’s banging which drum.

Carnival is one of the biggest celebrations in the world, taking place in many different countries and regions. It dates back to pre-Christian celebrations in Ancient Rome, and was later adopted into the Christian calendar to mark the period before Lent.

In Argentina, the way that it’s celebrated varies in each region. In the North West it’s characterised by pre-colonial traditions, while the city of Gualeguaychú is famous for its extravagant themed parades. In the the city of Buenos Aires, the traditional belongs to the murgas, which date back to 1869.

Murgas originated in Cadiz, Spain, but became a prominent part of carnival celebrations in the working class, immigrant neighbourhoods of Uruguay and Argentina at the turn of the 20th century in a unique cultural expression that mixes both African and European roots. They continue the carnival tradition of revelry and dressing up in costume, but also the tradition of satire and joking, which stems from Carnival’s associations with Momus, the Greek masked personification of satire and mockery.

Trains, subte and bus are most easily paid for with a SUBE.

BUS >   For each route the bus is painted differently making them easy to distinguish. The best way to figure out the bus system is using the >> BA Como Llego app. + ticketonline.com.ar

Voyenbus.com – We connect travellers with the best bus services in Argentina, Brasil and Spain public transport.

RAIL >   Long-distance trains are slowly returning to Argentina, but they are yet few in numbers and limited compared to the by inter-city bus network. A full timetable and tickets are available at the national operator >> Trenes Argentinos. (+ Satelite Ferroviario).