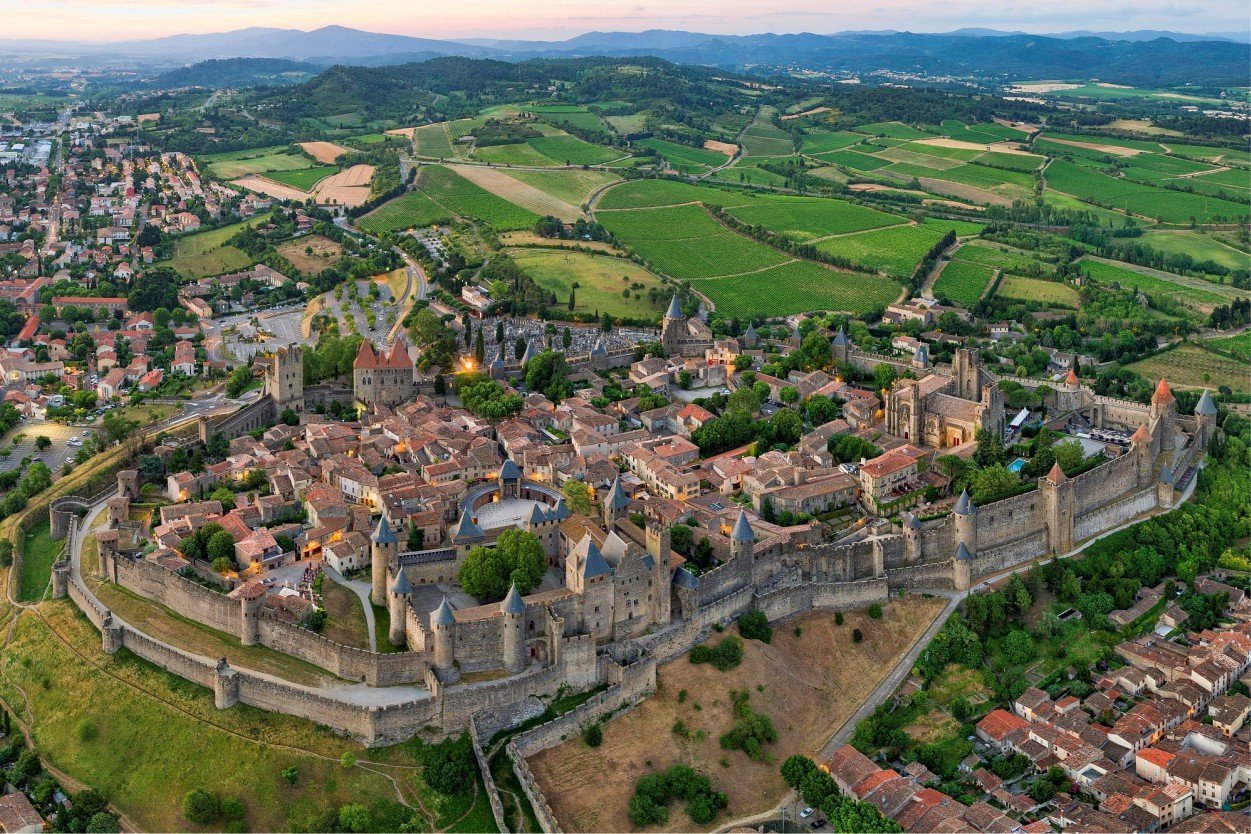 Carcassonne (map) is a city in southern France, located about 80 kilometres (50 mi) east of Toulouse, best known for its UNESCO World Heritage listed walled city. It can be visited comfortably as a day trip.

The Cité de Carcassonne (map) a medieval fortress settlement with a history that exceeds two and a half thousand years. Picturesque fortifications (over 3 km of walls with 52 towers, Robin Hood: Prince of Thieves was partly shot here).

The town centre, known as the ville basse (literally ‘lower city’, map), where the other sights and hotels are located.

Discover • What to do • Touristic guide

Cité de Carcassonne (map). The fortified city consists essentially of a concentric design of two outer walls with 53 towers and barbicans to prevent attack by siege engines. One section is Roman and is notably different from the medieval walls, with the tell-tale red brick layers and the shallow pitch terracotta tile roofs. One of these towers housed the Catholic Inquisition in the 13th century and is still known as “The Inquisition Tower” (Musée de l’Inquisition (map)).

Carcassonne Cathedral (map). The building was built in the thirteenth century as a parish church, dedicated to Saint Michael. Following war damage in the fourteenth century it was rebuilt as a fortified church.

Don’t leave Carcassonne without trying cassoulet, a local dish made of beans, sausage and duck. Foie gras is also a speciality of the region, so expect it to be on many menus.

Much to see in this somewhat neglected region of France. Get into the hills and visit little villages like Minerve. Try using the Michelin maps but forsake the red roads and take to the little white roads. You will be rewarded by seeing lovely little places that tour buses etc. never visit.

There are regular barge trips along the historic Canal du Midi, and these are a very relaxing way of spending some time. The boats leave from the jetty just outside the main train station, and tickets can be bought from clearly signposted vendors at the canal-side (just beside the lock).

Trains are a great way to get around in France. For regional trains, schedules can be found at ter.sncf.com. You can get from pretty much anywhere to anywhere else by train. For long distances, use the TGV (Train à Grande Vitesse, or High-speed train) on which reservations are obligatory. TGV • Thello • Ouigo. + RailEurope • Eurostar • Thalys • izy (Paris-Brussels) • TGV Lyria (Switzerland) • DB (Germany) • RENFE (Barcelona) >> *Rail travel in France