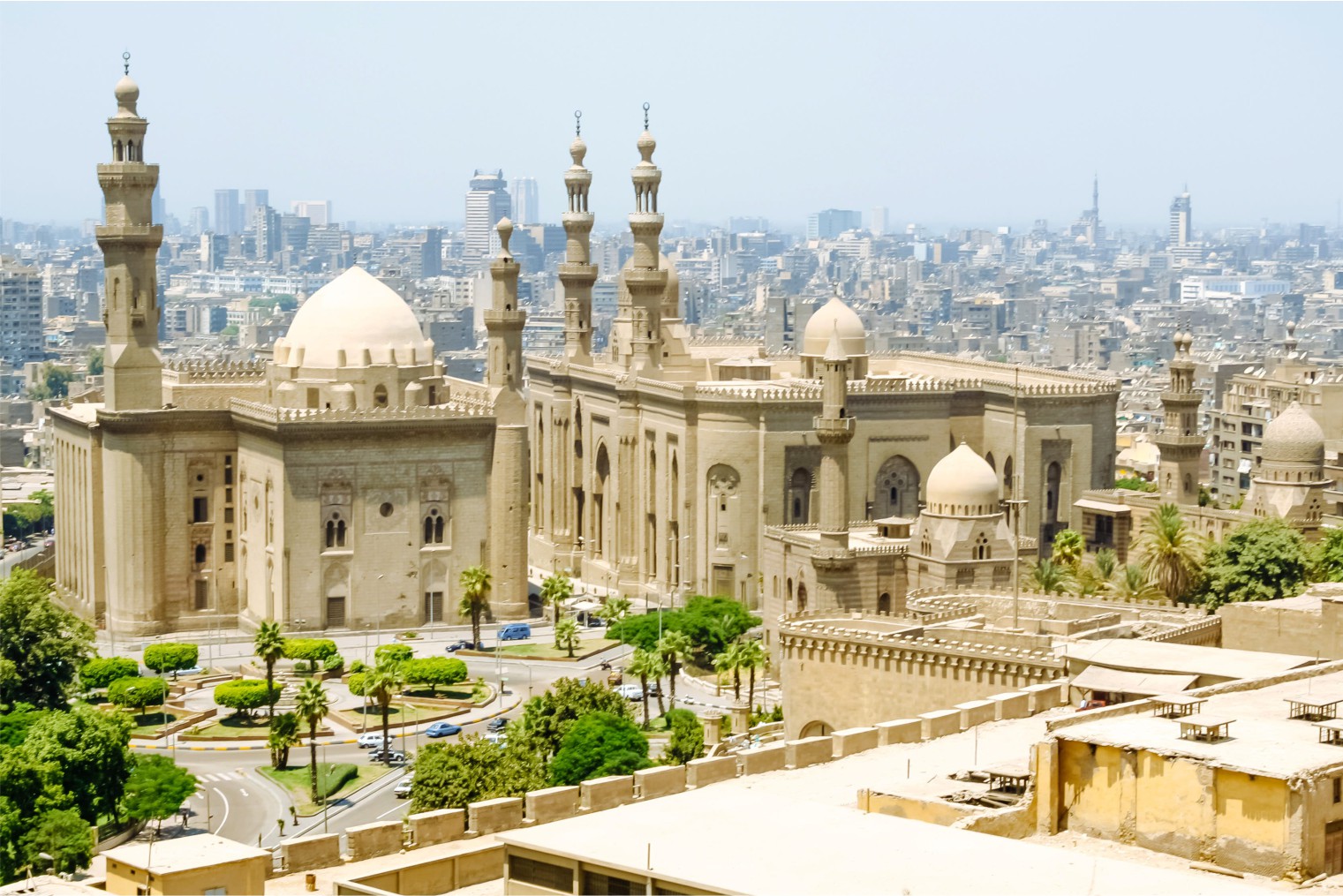 Cairo (map) is the capital of Egypt and the largest city in the Arab world. On the Nile river, Cairo is famous for its own history, preserved in the fabulous medieval Islamic city and Coptic sites in *Old Cairo (map) — with historic Cairo inscribed on the UNESCO World Heritage list. The Egyptian Museum (map) in the city centre is a must see, with its countless Ancient Egyptian artefacts, as is shopping at the Khan al-Khalili bazaar (map).

No trip to Cairo would be complete without a visit to the *Giza Pyramids (map) and to the nearby Saqqara Pyramid Complex / Pyramid of Djoser (map), where visitors will see Egypt’s first step pyramid built by the architect Imhotep for the third dynasty pharaoh Djoser.

Tahrir Square (map) was founded during the mid 19th century with the establishment of modern downtown Cairo.

*Old Cairo (map). This area of Cairo is so-named as it contains the remains of the ancient Roman fortress of Babylon (map) and also overlaps the original site of Fustat, the first Arab settlement in Egypt (7th century AD) and the predecessor of later Cairo. It is also considered part of what is referred to as “Historic Cairo” or “Islamic Cairo”, and is a UNESCO World Heritage Site.

*Islamic Cairo (map) is not more or less Islamic than the rest of the city, but it’s the area of the city which holds the most, the greatest and the most famous Islamic monuments. Many of these raised by the Fatimid caliphs who founded the city of Cairo (preceded by Fustat or Old Cairo). Unlike Islamic quarters in other cities, people, often quite poor, continue to live by historic monuments and mosques. A huge, bustling center of worship, trade, shopping and commuting, it’s a must-see for any visitors and deserves at least a couple of days of exploring.

The Museum of Egyptian Antiquities (map), known commonly as the Egyptian Museum, is home to the most extensive collection of ancient Egyptian antiquities in the world. It has 136,000 items on display, with many more hundreds of thousands in its basement storerooms. Among the collections on display are the finds from the tomb of Tutankhamun.

*Cairo Citadel (map). The Citadel is a fortified enclosure begun by Salah al-Din in 1176 AD on an outcrop of the Muqattam Hills as part of a large defensive system to protect both Cairo to the north and Fustat to the southwest.

*Khan el-Khalili (map) is an ancient bazaar, or marketplace adjacent to the Al-Hussein Mosque. It dates back to 1385, when Amir Jarkas el-Khalili built a large caravanserai, or khan.

The Cairo Tower (map) is a free-standing tower with a revolving restaurant at the top. It provides a bird’s eye view of Cairo to the restaurant patrons.

Scams against tourists are almost a national sport, though they’re usually obvious. A good rule of thumb is that if someone approaches you on the street, they’re trying to scam you. Don’t talk to them.

RAIL >   Cairo is the hub for railways in Egypt, almost all trains start and terminate here Egyptian National Railways. The sleeper service Cairo-Luxor-Aswan is run by Watania, a private company.