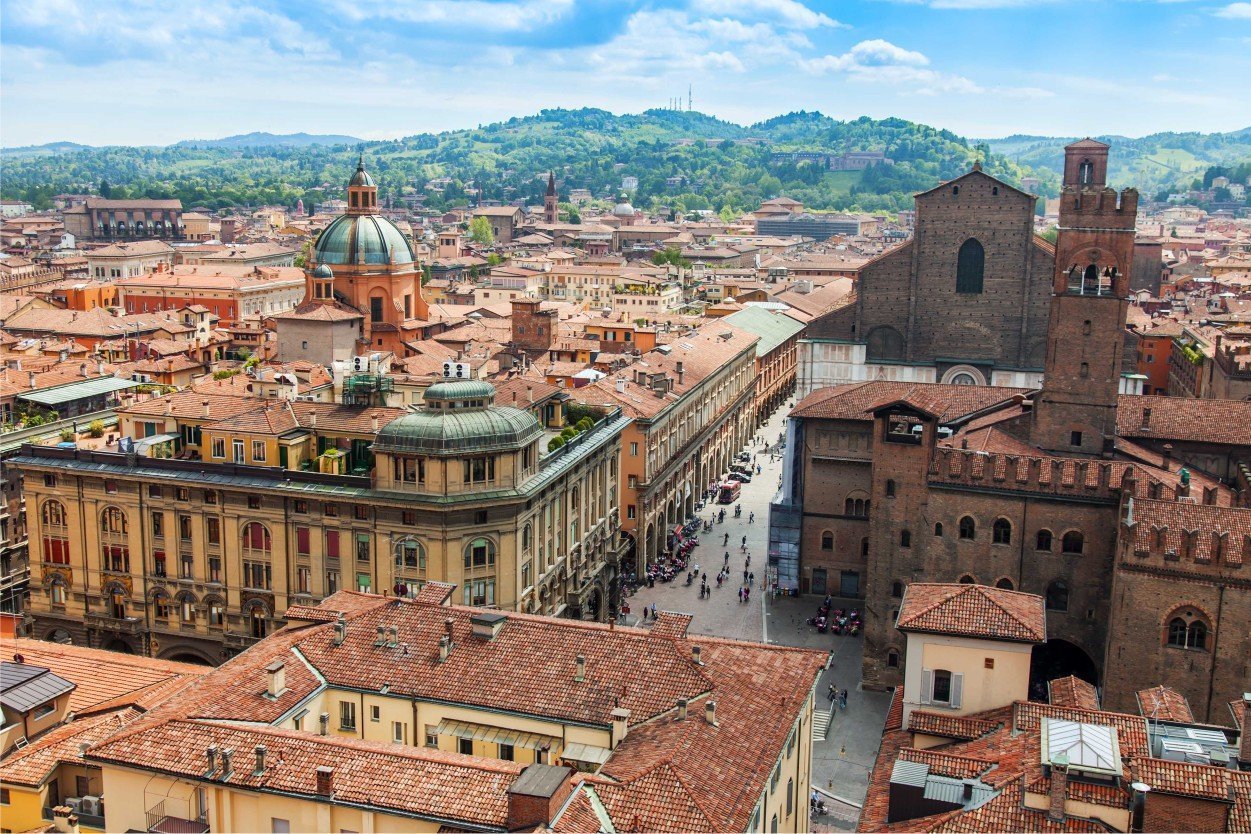 Bologna (map) is the capital and largest city of the Emilia-Romagna region in Northern Italy. Famous for its towers, churches and lengthy porticoes, Bologna has a well-preserved historical centre, thanks to a careful restoration and conservation policy which began at the end of the 1970s.

Until the late 19th century, when a large-scale urban renewal project was undertaken, Bologna was one of the few remaining large walled cities in Europe. Bologna’s 142 hectares (350 acres) historic centre is Europe’s second largest, containing an immense wealth of important medieval, renaissance, and baroque artistic monuments.

It is considered second only to Venice in beauty by many Italians and certainly has one of the largest and best preserved historic centers among Italian cities.

No more than twenty medieval defensive towers remain out of up to 180 that were built in the 12th and 13th centuries before the arrival of unified civic government. The most famous of the *towers of Bologna are the central “Due Torri” (Asinelli and Garisenda, map), whose iconic leaning forms provide a popular symbol of the town.

The cityscape is further enriched by its elegant and extensive *porticoes, for which the city is famous. In total, there are some 38 kilometres (24 miles) of porticoes in the city’s historical centre (over 45 km (28 mi) in the city proper).

The Portico di San Luca (map) is possibly the world’s longest. It connects Porta Saragozza (map) (one of the twelve gates of the ancient walls built in the Middle Ages, which circled a 7.5 km (4.7 mi) part of the city) with the Sanctuary of the Madonna di San Luca (map). In 2021, the porticoes were named as a UNESCO World Heritage Site.

Piazza Maggiore (map). Large pedestrian square located in the monumental center of the old part of the city, surrounded by a number of grand buildings.

San Petronio Basilica (map), built between 1388 and 1479 (but still unfinished), is the tenth-largest church in the world by volume, 132 metres long and 66 metres wide, while the vault reaches 45 metres inside and 51 metres in the facade. It is the largest (Gothic or otherwise) church built of bricks of the world.

The Basilica of Santo Stefano (map). Its sanctuary are among the oldest structures in Bologna, having been built starting from the 8th century, according to the tradition on the site of an ancient temple dedicated to Egyptian goddess Isis.

Pinacoteca Nazionale di Bologna (map). Containing the city’s most important art, it offers an interesting panorama of the Emilian and Venetian painting from the XIII to the XVIII century.

Galleria d’Arte Moderna “Raccolta Lercaro” (map). Houses about 2000 works by Italian and foreign artists with special attention to the sculptures by Manzù, Messina, Rodin and Giacometti.

Bologna is at its best from March/April to October, when it is warm and there is much outdoor sipping and dining, or just sitting in squares such as Piazza Santo Stefano and Piazza Maggiore. However, during July and August it can be very hot and sticky. In August, as is the case in much of Italy in the summer, many shops and restaurants are closed for the summer vacation.

CityMapper – Bologna | The ultimate transport app and technology for mobility in cities.