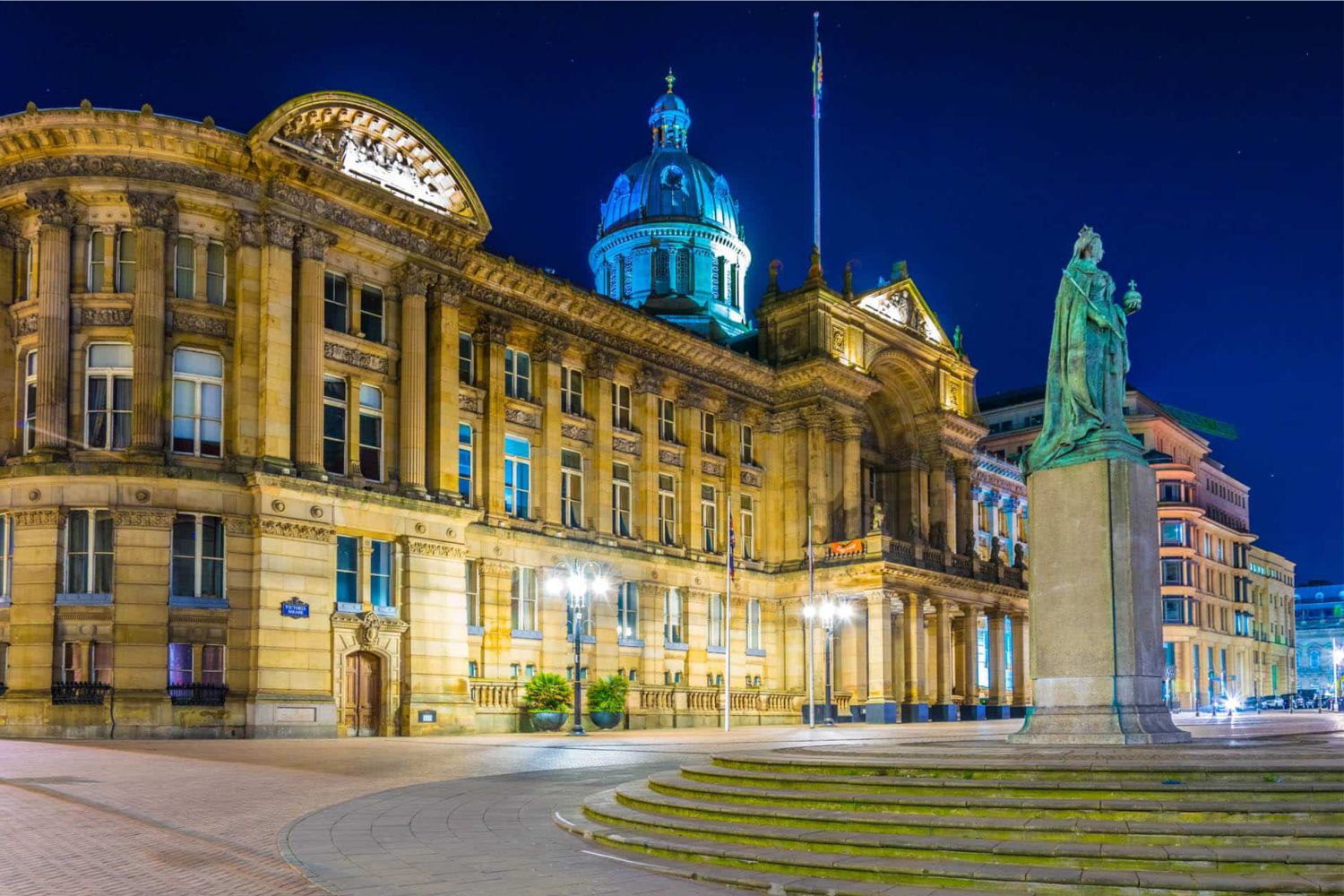 Birmingham (map), in the West Midlands, approximately 100 miles (160 km) from Central London, is Britain’s second-largest city. Known in the Victorian era as the “City of a Thousand Trades” and the “Workshop of the World“.

Since the 1990s, Birmingham has been undergoing a radical change and many of the post war buildings have been replaced. The majority of the city centre is now pedestrianised, and the canals cleaned up to make for attractive walkways.

Core City Centre (map) – extends northwestwards of the New Street station, inside the confines of the A38 and includes much of the surviving pre-war historic buildings of Birmingham, a number of important institutions and the historically prime addresses such as New Street or Colmore Row.

Southside – the part southeast of New Street station retains a more traditional ambiance with small buildings along narrow streets. Parts of it are occupied by Birmingham’s Gay Village (map) and Chinese Quarter (map).

Jewellery Quarter (map) – true to its name, workshops in the quarter still produce 40% of the UK’s jewellery. As such, it retained its 19th-century appearance lost by other industrial parts of Birmingham and became a tourist attraction itself.

Moseley (map) is a suburb. Much of Moseley Village dates from Victorian times and is a conservation area.

For a place with a strong industrial heritage, Birmingham does not have the large range of historical attractions you may expect, however, this is offset by the arts being extremely well-represented.

Birmingham Museum and Art Gallery (map). Large museum with some local history, several temporary exhibitions and large permanent collection including an extensive collection of Pre-Raphaelite paintings. Home to part of the stunning Anglo-Saxon hoard, the largest hoard of Anglo-Saxon gold metal work discovered in the UK in 2009.

Sarehole Mill (map). Built in 1765, Sarehole Mill is a fine example of one of more than fifty water mills that existed in Birmingham at one time. Matthew Boulton used the Mill for making buttons and for metal rolling until he moved his operations to Soho in 1761.

Museum of the Jewellery Quarter (map). Jewellery workshop abandoned in working condition, later reopened as a museum. Visits are by tour, lasting approximately one hour. Worth seeing, especially in the context of the wider, still working commercial Jewellery Quarter.

Birmingham Cathedral (St Philip’s Cathedral, map). Church of England cathedral, built between 1709 and 1715 and the centre of the Diocese of Birmingham. Grade 1 listed building in the UK, designed as a parish church in the Baroque style. Contains four spectacular pre-Raphaelite stained glass windows.

St Martin in the Bull Ring (map). Martin is the parish church of Birmingham, or “The Cathedral of the Bull Ring”, as some would say. The first church was probably Norman, but was rebuilt in the 13th century.

Farmer’s Market (Moseley, map). 4th Saturday of every month. There is a selection of farm produce, but many stalls selling all manner of local foodstuffs (pies, jam, deli foods, etc.). It was a finalist in the best farmer’s market in the UK competition.

Broad Street (map), the No 1 party street of Birmingham, has a large range of clubs, bars and pubs. This is a good location for a decent English Friday night.

Bus, train and Metro all come under the authority of Network West Midlands | TFWM (Part of Centro, the PTE of Birmingham and surrounding area), their website is the best source for all information required on public transport in the region.

RAIL >   Birmingham is a major hub of Britain’s rail network. Allow plenty of time to find your train at New Street station as it is huge and very confusing.

Birmingham City Council produces an excellent cycling and walking map of the area. You can pick one up from any local library, tourist information office, leisure centre or bike shop. (onyourbike.com)