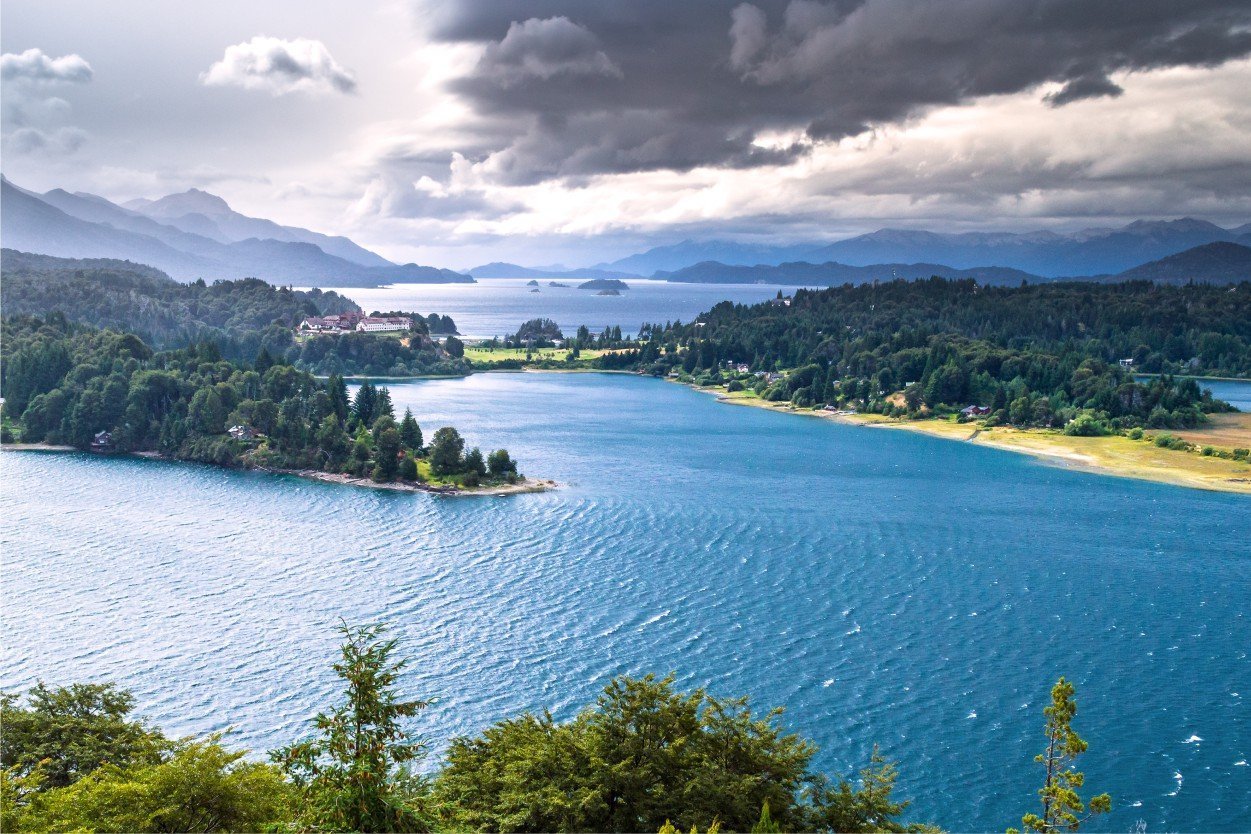 San Carlos de Bariloche (map) is a city in the province of Río Negro, situated on the foothills of the Andes, surrounded by lakes and mountains. Bariloche is located within the *Nahuel Huapi National Park.

After development of extensive public works and Alpine-styled architecture, the city emerged in the 1930s and 1940s as a major tourism centre with skiing, trekking and mountaineering facilities.

Despite being an undeniable tourist magnet, Bariloche is set amidst incredible landscapes which should not be missed by nature-loving travelers. Another claim to fame is its Swiss-like atmosphere and its chocolate boutiques and breweries, and look for the St Bernard dogs on display for tourists.

Between 1935 and 1940, the Argentine Directorate of National Parks carried out a number of urban public works, giving the city a distinctive architectural style. Among them, perhaps the best-known is the Civic Centre.

Bariloche grew from being a centre of cattle trade that relied on commerce with Chile, to becoming a tourism centre for the Argentine elite.

One of the most popular activities is skiing, and most tourists visit Bariloche in winter (June–September). The main ski slopes are the ones at Cerro Catedral (map), the biggest ski resort in South America and in the southern hemisphere. During the summer, beautiful beaches such as Playa Bonita (map) and Villa Tacul welcome sun-bathers; brave lake swimmers venture into its cold waters (chilled by melting snow).

Trekking along trails in the nearby mountain wilderness is supported by a few high-mountain huts operated by the Club Andino Bariloche. The city is also noted for its chocolates and Swiss-style architecture.

San Carlos de Bariloche lies close to the Chilean border and is connected to Chile by the Cardenal Antonio Samoré Pass (map) crossing the Andes Mountains.

Cerro Campanario (map). Beautiful view of the lakes and mountains around – hike it (30 min, departs near the bottom of the lift) or take the ski-lift.

Los Arrayanes National Park (map). A forest of rare, orange-colored trees that only grow on a local island (and one in Japan) near Villa la Angostura (map).

Circuito Chico (map). This beautiful 25-km route can be biked or hiked. You can also do it by bus during summer (line 10). If you hike it, take bus 20 towards Llao Llao till “El Muelle”. See map above for track.

Cerro Frey trek. Considered by many as the best 1-3 days trekking in Bariloche. When it’s cold enough you can skate in the lake near the refuge. When there’s not too much snow you can climb the granite “agujas” (needles) near the refuge which have ways for all levels, or head to Lago Jakob.

Never hike alone on the trails which touch the city, particularly up to Piedras Blancas. There have been many reported robberies of tourists on these paths.

How to get there (barilocheturismo.gob.ar)

RAIL >   The once-weekly El Tren Patagónico slowly winds along the vast open plains on an 19-hour journey from *Viedma on the Atlantic coast stopping by in *San Antonio Oeste and several remote outposts along the route. Trenes Argentinos Operaciones. + webventas.sofse.gob.ar – tickets for long-distance trains on Argentina. *Rail transport in Argentina (wiki).