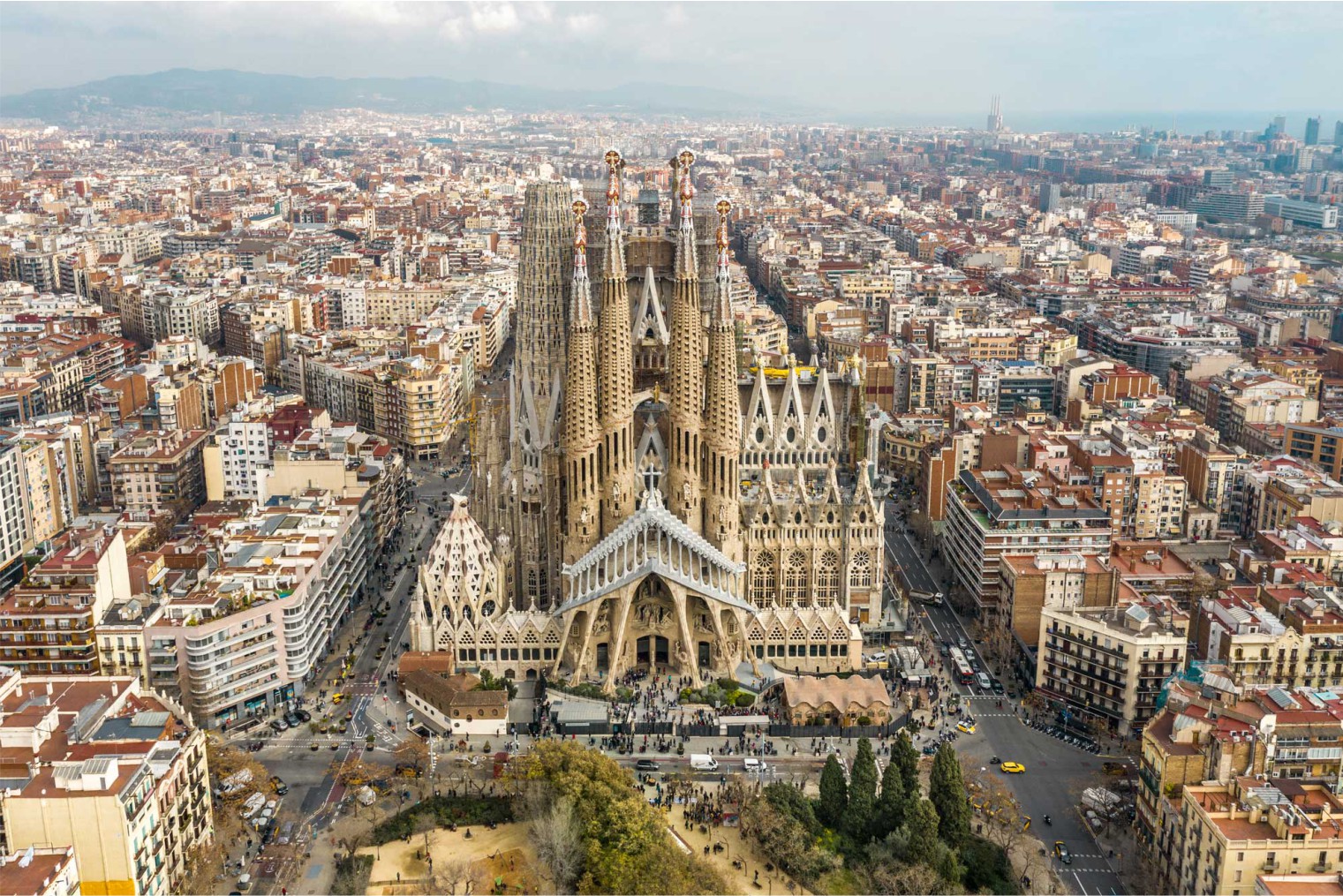 Barcelona (map) is Spain’s second largest city, and the capital of Catalonia.

The many faces of Barcelona include the medieval Old Town (map), and the unique street grid resulting from 19th-century urban planning. The city has long sandy beaches and green parks on the hills, pretty much side-by-side. It is also famous for a number of prominent buildings, of which the most-known are by the architect Antoni Gaudí, including his Sagrada Família (map), which became Barcelona’s symbol to many.

Barcelona as internationally renowned a tourist destination, with numerous recreational areas, one of the best beaches in the world, mild and warm climate, historical monuments, including eight UNESCO World Heritage Sites,

A May 2017 article in England’s The Telegraph newspaper included Barcelona among the Eight Places That Hate Tourists the Most and included a comment from Mayor Ada Colau, “We don’t want the city to become a cheap souvenir shop [like Venice]”. To moderate the problem, the city has stopped issuing licenses for new hotels and holiday apartments.

August is probably the busiest time for tourists in Barcelona. However, many shops and restaurants are closed from early-August to early September. During this time, you will find the most expensive hotel rates.

Ciutat Vella (Catalan for Old city, map) is, as its name suggests, the oldest part of Barcelona. Centred along the Las Ramblas boulevard,  including the medieval Barri Gòtic, Raval, and El Born (also known as La Ribera). Ciutat Vella is where the nightlife, as well as the tourist traffic in Barcelona is centred.

The Barri Gòtic (Catalan for “Gothic Quarter”, map) is the centre of the old city of Barcelona. Many of the buildings date from medieval times, some from as far back as the Roman settlement of Barcelona.

Barcelona’s main annual festival around 24 September, encompassing many events such as human towers (castellers), free live music events on the streets, firework displays, and processions of wooden giants. It is a holiday and the city offers a lot of activities to have fun. Enjoy a fountains and fireworks show at the base of the Montjuïc hill.

Park Güell (map) is a privatized park system composed of gardens and architectural elements located on Carmel Hill. Park Güell is the reflection of Gaudí’s artistic plenitude, which belongs to his naturalist phase (first decade of the 20th century). During this period, the architect perfected his personal style through inspiration from organic shapes (wiki).

Palau Güell (map) is a mansion designed by the architect Antoni Gaudí for the industrial tycoon Eusebi Güell, and was built between 1886 and 1888.

Casa Milà (map) popularly known as La Pedrera or “The stone quarry”, a reference to its unconventional rough-hewn appearance. It was the last private residence designed by architect Antoni Gaudí and was built between 1906 and 1912.

Casa Vicens (map) is a house, designed by Antoni Gaudí, now a museum. It is considered one of the first buildings of Art Nouveau and was the first house designed by Gaudí.

Sagrada Família (map). The basilica has a long history of splitting opinion among the residents of Barcelona: over the initial possibility it might compete with Barcelona’s cathedral, over Gaudí’s design itself, over the possibility that work after Gaudí’s death disregarded his design (wiki).

Casa Batlló (map). The local name for the building is Casa dels ossos (House of Bones), as it has a visceral, skeletal organic quality. It was designed by Antoni Gaudí, and is considered one of his masterpieces. A remodel of a previously built house, it was redesigned in 1904 by Gaudí and has been refurbished several times after that.

Palau de la Música Catalana (map) Designed in the Catalan modernista style by the architect Lluís Domènech i Montaner,[1] it was built between 1905 and 1908 for the Orfeó Català, a choral society founded in 1891 that was a leading force in the Catalan cultural movement that came to be known as the Renaixença (Catalan Rebirth).

Hospital de Sant Pau (map) It was a fully functioning hospital until June 2009, when the new hospital opened next to it, before undergoing restoration for use as a museum and cultural center, which opened in 2014.

Barcelona has a great number of museums, which cover different areas and eras. (*List of museums in Barcelona)

National Museum of Art of Catalonia (Museu Nacional d’Art de Catalunya, map) the museum is especially notable for its outstanding collection of romanesque church paintings, and for Catalan art and design from the late 19th and early 20th centuries, including modernisme and noucentisme.

Barcelona Museum of Contemporary Art (map). The permanent collection of around 5,000 works (up from 1,100 works at the time of the museum’s opening in 1995) dates from the mid-20th century onward.

Museu Picasso (map) houses one of the most extensive collections of artworks by the 20th-century Spanish artist Pablo Picasso. With 4,251 works exhibited by the painter, the museum has one of the most complete permanent collections of works. The museum is housed in five adjoining medieval palaces in Barcelona’s *La Ribera neighborhood, in the Old City, and more specifically, it is located on Montcada Street, a formerly very prestigious street home to wealthy merchants and nobility from the Gothic to the Baroque periods.

Museum of the History of Barcelona (map) is a history museum that conserves, researches, communicates and exhibits the historical heritage of the city of Barcelona, from its origins in Roman times until the present day. The museum’s headquarters are located on Plaça del Rei, in the Barcelona Gothic Quarter (Barri Gòtic).

CosmoCaixa Barcelona (map). The museum features a variety of exhibitions, permanent and temporary, that showcase the environment, nature, science, and space.

Museum of Natural Sciences (map) is a natural history museum.

Barcelona beach was listed as number one in a list of the top ten city beaches in the world according to National Geographic and Discovery Channel. Sant Sebastià (map), Barceloneta (map) and Somorrostro (map) beaches, both 1,100 m (3,610 ft) in length, are the largest, oldest and the most-frequented beaches in Barcelona.

La Boqueria (Mercat Sant Josep, map) Large public market with a diverse range of goods and produce. Enjoy freshly squeezed organic fruit juices for €1.5 per cup. If you go near closing time (20:00) sellers will make you a special price (2 or 3 for €2). Closed Sundays.