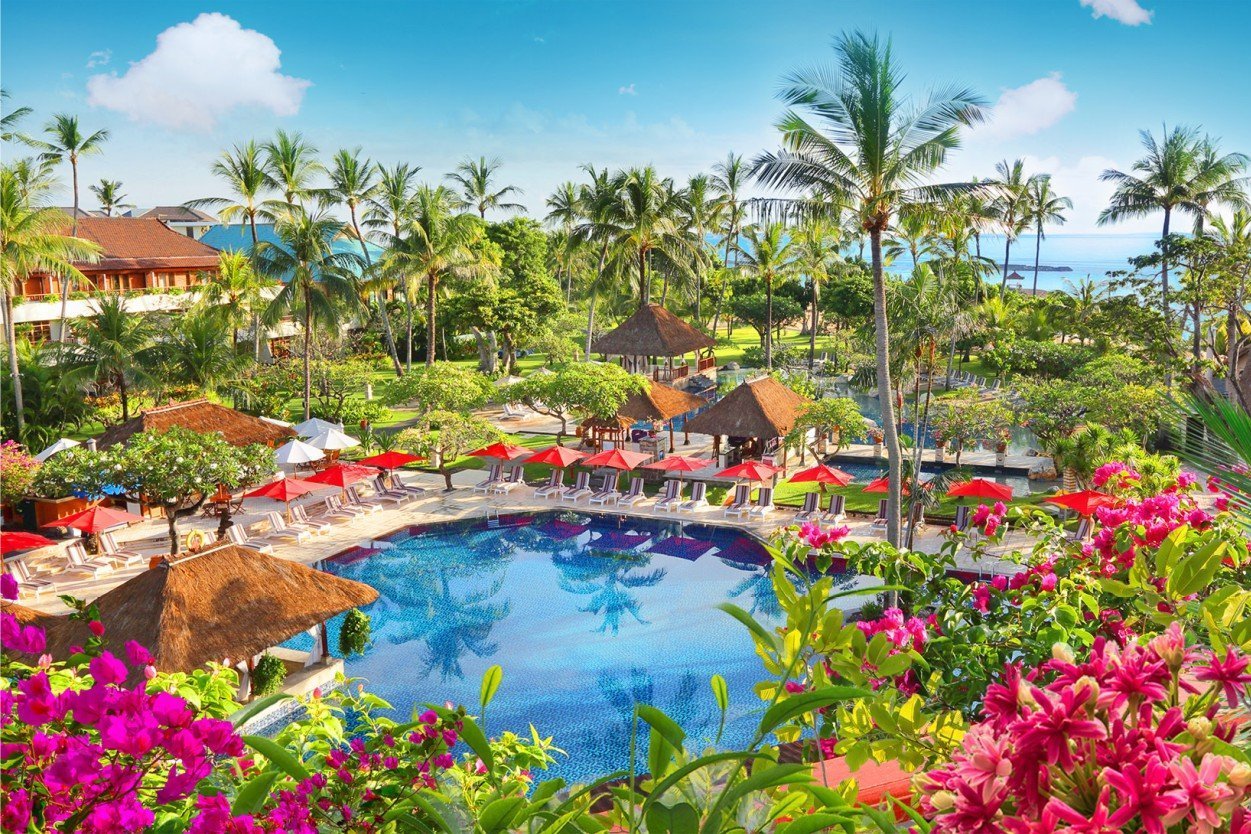 Bali, the famed “Island of the Gods”, stakes a serious claim to be paradise on earth. Its diverse landscape of mountainous terrain, rugged coastlines and sandy beaches, lush rice terraces and barren volcanic hillsides provide a picturesque backdrop to its colourful, spiritual and unique culture.

Five rice terraces and their water temples have been inscribed on the UNESCO World Heritage Site under the name “Cultural Landscape of Bali Province: the Subak System as a Manifestation of the Tri Hita Karana Philosophy”.

The word “paradise” is understandably used a lot in Bali. Friendly, hospitable people; a magnificently visual and spiritual culture; and spectacular beaches with great surfing and diving have made Bali the top tourist attraction in Indonesia.

Bali is one of more than 18,000 islands (based on a satellite view) in the Indonesian archipelago, and is just over 2 km (almost 1.5 miles) from the eastern tip of the island of *Java and west of the island of *Lombok.

The vast majority of international visitors to Indonesia go nowhere else but Bali.

Unlike most other islands in largely Muslim Indonesia, Bali is a pocket of Hindu religion and culture. Every aspect of Balinese life is suffused with religion. There are an estimated 20,000 temples (pura) on the island, each of which holds festivals (odalan) at least twice a year. With many auspicious days throughout the year there are always festivities going on.

The Balinese are master sculptors. Temples and courtyards are replete with statues of gods and goddesses like Dewi Sri, the goddess of rice and fertility, as well as guardians and protecting demons like toothy Rakasa, armed with a club.

Bali’s best known attractions are its countless Hindu temples. Each village is required by adat (customary law) to construct and maintain at least three temples: the pura puseh (temple of origin) at the kaja (pure) side of the village, the pura desa (village temple) at the centre for everyday community activities and the pura dalem (temple of the dead) at the kelod (unclean) end. Wealthy villages may well have more than these three obligatory temples, and additionally all family compounds have a temple of some nature.

Most of the coastline of Bali is fringed by beaches of some type, with the exceptions being some important areas of mangrove forest in the southeast, and certain parts of the Bukit Peninsula where high cliffs drop straight to the crashing waves of the Indian Ocean.

Beaches that are especially safe for swimming include *Jimbaran Bay (map) and virtually all of the north coast. At all times though, obey local swimming safety markers—far too many visitors to Bali drown each year after ignoring these. Bali’s popular southern beaches are sometimes not the cleanest you will find.

!  If you see a red flag planted in the sand, do not swim there, as they are a warning of dangerous rip currents. These currents can pull you out to sea with alarming speed and even the strongest swimmers cannot swim against them. The thing to do is to stay calm and swim sideways (along the shore) until out of the rip and only then head for the shore.

Away from the coast, Bali is largely lush, green and fertile, and rice paddies are the dominant agricultural feature of the island. Especially beautiful examples of terraced paddies can be found in the centre of the island north of *Ubud (map) and in east Bali around *Tirta Gangga (map). Elsewhere, gently rolling rice fields make for very pleasing rural scenery.

Bali is host to some of the finest yoga and well-being centres and retreats in the world. You can find an abundance of amazing yoga classes to suit all levels in most of the tourist areas. Look for the best yoga centres in Ubud and *Seminyak. Bali is also now home to a number of renowned yoga teacher training centres. Good local resources for finding the best include Bali spirit.

Warm waters, crowds of young backpackers, cheap living and reliable waves keep Bali near the top of world surfing destinations. The southern coast at *Kuta, *Legian and *Canggu, the *Bukit Peninsula and *Nusa Lembongan are the primary draws. Expert surfers usually head for the big breaks off the Bukit Peninsula, whilst beginners will find the gentler, sandy areas between Kuta and Legian to be ideal for learning. All Bali’s surf beaches are described in the Indo Surf and Lingo surfing guidebook.

BUS >   There are direct bus services to Bali from all major cities on Java and Lombok that link with ferries for sea crossings. These are cheap and easy, but slow. Perama bus company is a good option for budget travelers. There are no Perama bus from Java, only from Mataram, Lombok. Kura-Kura Bus is a public shuttle service that operates from southern Bali to Ubud, but oriented towards tourists as it stops at hotels and places of interest.