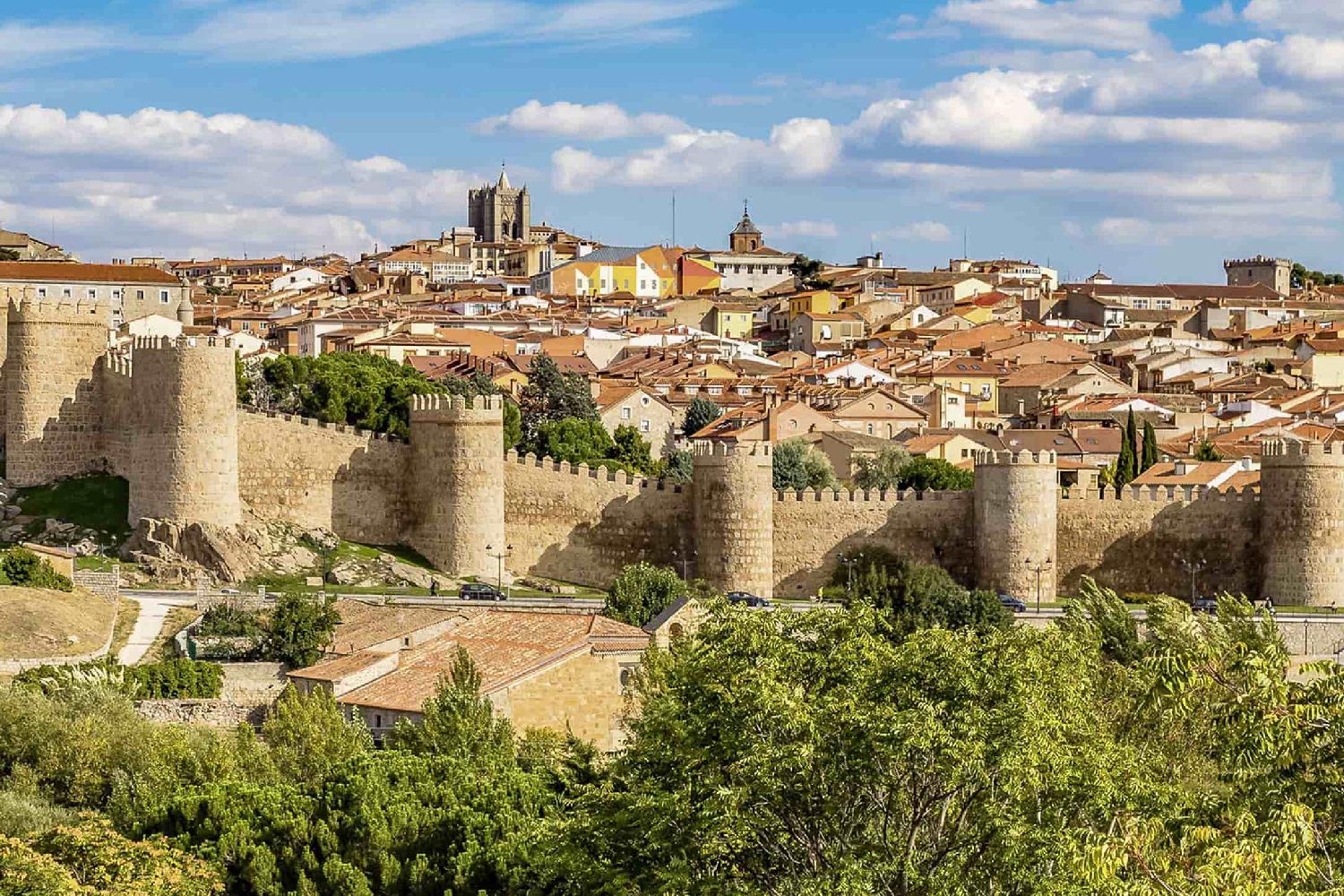 Distinctly known by its medieval walls, Ávila (map) is sometimes called the Town of Stones and Saints, and it claims that it is one of the towns with the highest number of Romanesque and Gothic churches per capita in Spain.

It has complete and prominent medieval town walls, built in the Romanesque style; writer José Martínez Ruiz, in his book El alma castellana (“The Castilian Soul”), described it as “perhaps the most 16th-century town in Spain”.

Its old town is spectacularly ringed by ancient walls, and has been inscribed on the UNESCO World Heritage List.

What to see • What to do

Ávila may have been the ancient town known as Abula, mentioned by Ptolemy in his Geographia (II 6, 60) as being located in the Iberian region of Bastetania.

The main landmark in the city is the imposing Walls of Ávila (11th-14th centuries), begun in 1090. The enclosed area is 31 hectares (77 acres) with a perimeter of 2,516 metres (2,752 yd), 88 blocks of semicircular towers. The walls represent the largest fully illuminated monument in the world. It is possible to walk upon the walls for roughly half their circumference.

Cathedral of Ávila (map). The construction of the iron-grey granite Gothic Cathedral of Ávila is said to have commenced in 1107 under Alvar Garcia de Estrella. Other historians believe the Cathedral to be the work of the master mason Fruchel in the 12th century.

Basílica de San Vicente (map). Construction began in the 12th century and lasted until the 14th century. Its design is attributed to the French master Giral Fruchel, the author himself from the cathedral and pioneer of the Gothic style in Spain.

Real Monasterio de Santo Tomás (map) is a Dominican convent of the late 15th century. Despite being away from the historic centre, it is one of the most important monuments of the town.

Santuario de Nuestra Señora de Sonsoles (map). This sanctuary is located 6 km from the capital in a picturesque area, and has a restaurant, hostel, picnic areas, and playgrounds.

Fiestas de Santa Teresa. The festivities of Santa Teresa last almost the entire month of October. The proclamation is done by the mayor in the Plaza Mayor, accompanied by some celebrity. After the proclamation was organized in the same place a musical performance with renowned singers.

The festival program includes several musical concerts, a fairground, bullfights, passacaglia, processions of the fan groups, chocolate with churros and liturgical acts naturally focus on the day of the patroness, on 15 October with multitudinous mass presided by Bishop, then celebrated a great procession.