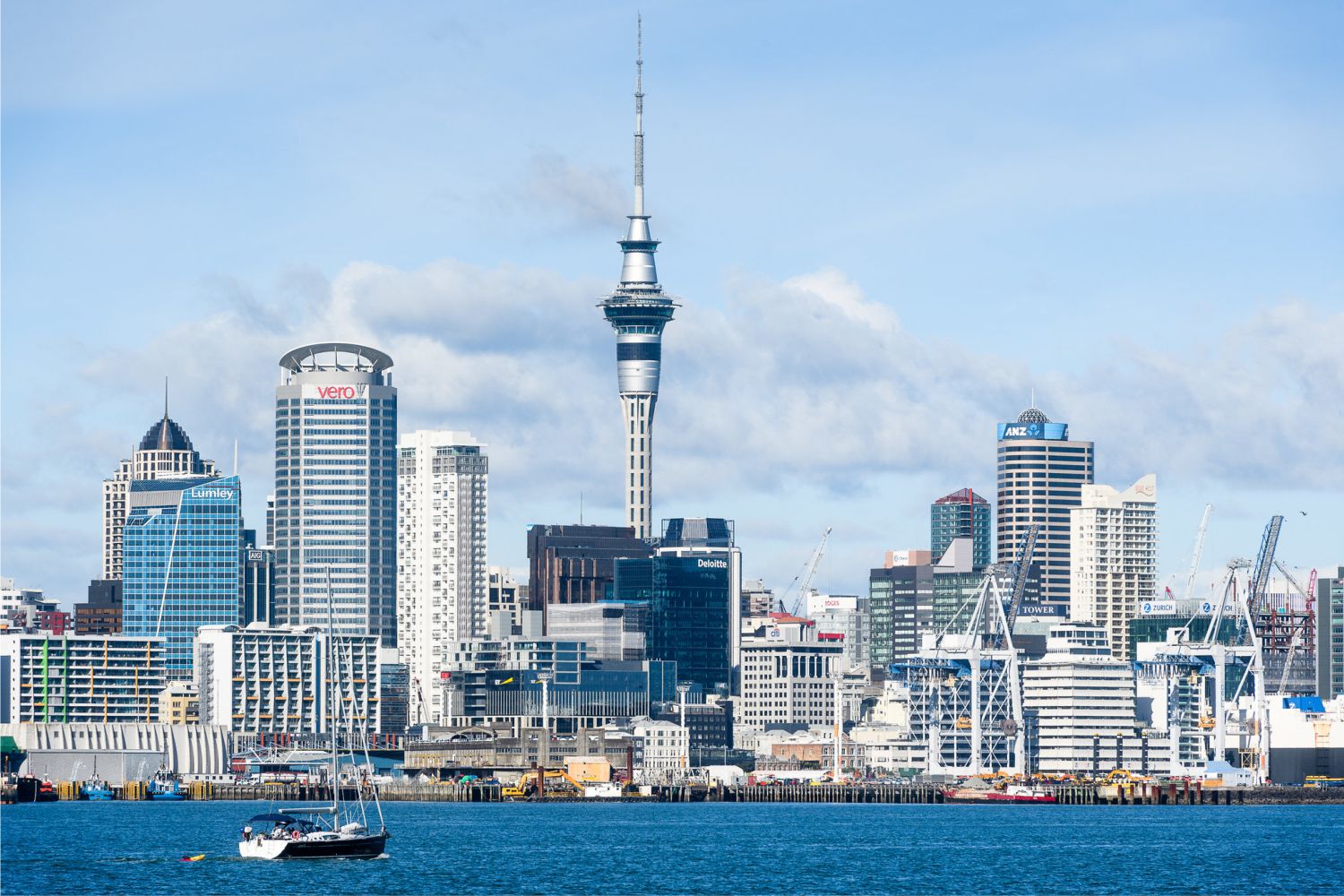 Auckland (map) is the largest city in New Zealand, and the main arrival point for visitors to the country. It is a vibrant multicultural city, set around two big natural harbours, and ranked as one of the most liveable cities in the world.

Central Auckland (map). The central business district and central suburbs that made up the former Auckland City. It has many of the main tourist attractions and the bulk of accommodation options.

It’s lucky enough to have its own beautiful landscapes, waterways, and other attractions to draw tourists in. It is not New Zealand’s political capital though – that honour goes to Wellington.

Auckland Art Gallery (map). The largest collection of national and international art in New Zealand, housed in a landmark building on the edge of Albert Park in the heart of Auckland.

Holy Trinity Cathedral (map). Large modern Anglican cathedral that opened in 1965 and can seat 1100 people. Next to it is St Mary’s Church (map), the largest wooden Gothic church in the world, built in 1886 and moved to the present site in 1982.

Mount Eden / Maungawhau (map). The highest natural point in Auckland at 196 m above sea level, this volcanic peak provides 360-degree views from beside the 50-metre deep crater at its summit. There are numerous pedestrian entrances from surrounding streets to the hill’s walkways.

Britomart Precinct (map) on the waterfront in the city centre is home to an array of popular and diverse bars and eateries.

The area locals will most definitely warn you about is South Auckland, which is widely regarded as one of New Zealand’s most dangerous locations due to its significant poverty and unemployment rates. While it is nowhere nearly as dangerous as “rough” areas in the USA or Europe, it is advised to remain on one’s guards at night.

North Shore beaches (map) are on the Pacific Ocean and stretch from Long Bay in the north to Devonport in the south. They are almost all sandy beaches with safe swimming, and most have shade provided by pohutukawa trees. Most are accessible by bus. Takapuna Beach (map) is the most centrally located, with a lovely beach-front café at one end. Just north of Long Bay (map) is a family nudist beach.

Tamaki Drive beaches (map) are on the Waitemata Harbour, in the upmarket suburbs of Mission Bay (map) and St Heliers (map) in Central Auckland. These are sometimes-crowded family beaches with a good range of shops lining the shore. Swimming is safe. Mission Bay beach is Auckland’s equivalent of Los Angeles’ Santa Monica/Venice Beach and is extremely popular on a hot summer’s day.

To its east, Kohimarama and St Heliers beaches are usually less crowded. Ladies Bay to the east of St Heliers has historically been a nudist-friendly beach, but is frequented by regular beachgoers too.

AT website – is responsible for all the region’s transport services, from roads and footpaths, to cycling, parking and public transport.

The Britomart Transport Centre (map) on the corner of Queen St and Customs St near the waterfront in the CBD is the final arrival/departure point for the Auckland Transport (AT) train network that links Central Auckland with South Auckland and West Auckland. It is the main information centre for public transport, where you will find free bus, train and ferry schedules. Timetables can also be downloaded from the AT website.

BUS >   InterCity. New Zealand’s national coach company, with services connecting over 600 destinations nationwide. + GreatSights • Skip Bus. Backpacker buses >> KiwiExperience Backpacker Bus and Stray Travel Bus offer bus trips around New Zealand where you can get on and off as you please after purchasing a pass.

Inter-city passenger services are operated by KiwiRail Scenic Journeys, with just a few popular tourist services that pass through spectacular scenery and have a running commentary, panoramic windows and an open-air viewing carriage. >> *Rail travel in New Zealand

AIRPORTS >   Auckland Airport. New Zealand’s largest airport is located 22 km/14 miles south of central Auckland in the southern suburb of Mangere on the shores of the Manukau Harbour.