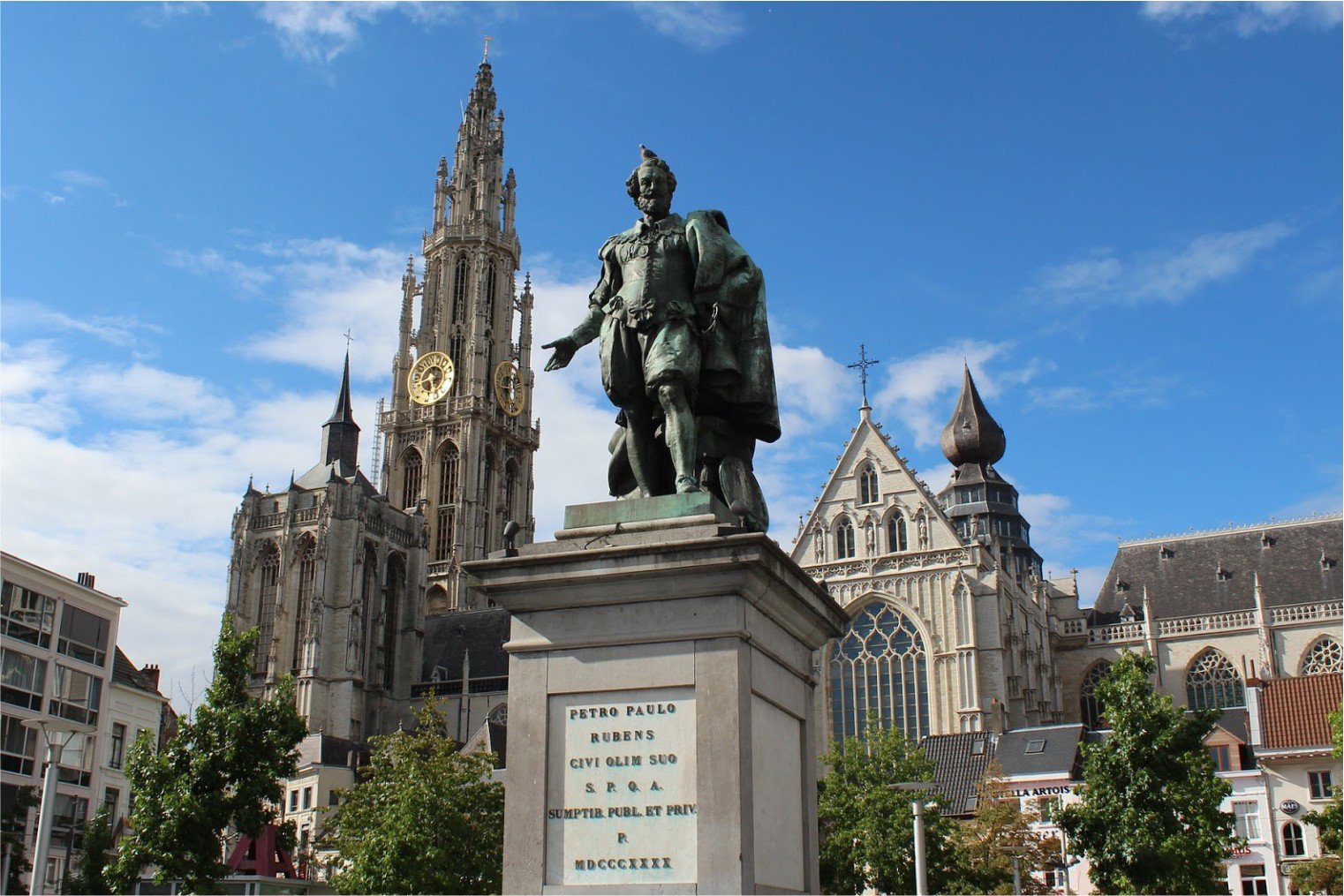 Antwerp (map) is the capital of the eponymous province in the region of Flanders. Antwerp has grown to become a trendy city, attracting many Flemish and foreign artists, writers, intellectuals, and actors. This is reflected in the city’s many trendy bars and shops.

Antwerp is a city with many faces. While it may not be as historically preserved as Bruges or Ghent, it is a very dynamic city, offering a perfect mix of history and present-day modern life.

The friendliness of the people of Antwerp and their innate penchant for good food and good living, combined with their low stress lifestyle, makes it a desirable and relaxing place to visit.

Most things to see are near or within the Boulevards, the half-moon of avenues where there were once 16th-century city walls. This old town centre (map), with a diameter of about 1.5 km, can be walked, and there is also excellent public transport. The centre is densely signposted to aid those discovering it on foot.

With the Antwerp City Card you can visit all museums and three monumental churches over a 48-hour period. It also features a 25% discount on attractions, sightseeing and bicycle rentals.

*Zurenborg neighborhood (map). A little off the beaten track. This neighbourhood in the south east of Antwerp (near the railway station Antwerpen-Berchem, look for ‘Cogels-Osylei’ on the map) is known for its eclectic, sometimes rather bizarre 19th century architecture. Consider taking a tram or bicycle to get there.

Antwerp Ruien (map). You can take a guided tour of the underground city of Antwerp.

Weekend Markets take place on the Theaterplein Square (map) in front of the Stadsschouwburg theatre. The markets are very popular with stalls offering everything from food (fruit and veg, meat, fish, nuts, cheese ethnic specialities) to household goods to bicycles to antiques to clothes. Sunday tends to see a lot more stalls compared to Saturday.

City Hall / Old Market Square (Stadhuis/Grote Markt, map). This is the historical centre of town. The market square is surrounded by the typical medieval guild houses you find in most Flemish historical towns. The city hall is designed in special architectural style with a combination between Gothic and early Renaissance, and is a UNESCO World Heritage Site. This style is almost exclusively found in this region of Europe.

The hidden street Vlaeykensgang (map). Connects Hoogstraat, Oude Koornmarkt and Pelgrimsstraat. It is a real street, but only accessible through unassuming medieval front doors in the streets. The medieval equivalent of a gated community. It now houses nice, informal restaurants and chic, discrete houses. A must see!

Cathedral of Our Lady (Onze Lieve Vrouwekathedraal, map). One of the most impressive and largest Gothic cathedrals in Northern Europe, built in 1351 it stands over 400 ft tall. It also houses some of Rubens’ most famous paintings.

Carolus Borromeus Church (map). Unlike the cathedral, this is a Baroque church. With a safe and minimal exterior, you would not know the beautiful decorations (done by Rubens’ studio) are inside.

*Red light district (map). If you want to visit, consider going during the day. When Villa Tinto (map) set up, Antwerp’s little red light district became Europe’s most high tech brothel. Even if you have no intention of partaking in the festivities, it is worthwhile just to see the spectacle that the district is. 200 women all in their own window dressed for action.

Plantin Moretus Museum (map). The home of 16th-century bookbinder and printer Christoffel Plantin. Regarded as one of the finest museums dedicated to printing in the world. Its extensive collections of important books and printing presses along with its role in spearheading the technology of printing have seen it added to the UNESCO World Heritage List.

Vleeshuis (map). Literally, the “Meat house”. It was built as the guild hall for the butchers. The building is famous for the original masonry made to resemble stacks of bacon (switching between white stones and red bricks). It now houses a museum, of which the main part comprises a musical instrument collection, including some examples of old harpsichords built by the local Ruckers family.

The Begijnhof (beguinage, map). A sort of medieval monastery for women. The well-kept gardens are great photo opportunities.

Wherever you are in Antwerp, you will always be near a pub or another drinking facility. Not surprising in the city that has the most pubs per capita in the world. The pubs do not have a closing hour. Drinks originating here are De Koninck (commonly called “Bolleke”) beer, and Elixir d’Anvers – a liquor based on plants.

+ Transport to and in Antwerp (visitantwerpen.be) • Public Transport | BELGIUM (belgium.be)

Antwerp’s bike-sharing scheme is called Velo. You can get a day pass for these bikes in the Central Station and pick up your bike at more than 80 places in Antwerp.

Belgian beer and food in Antwerp