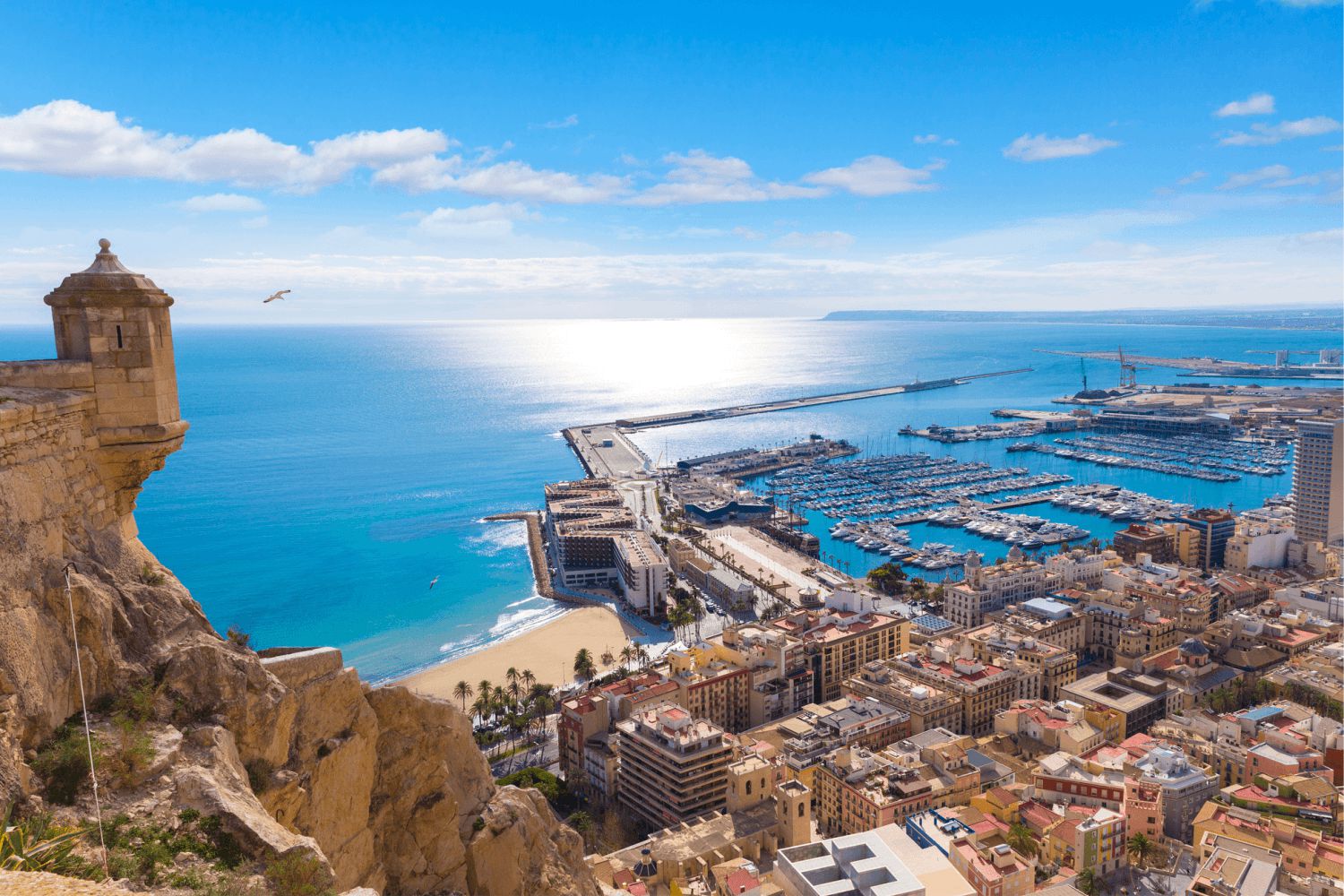 Alicante (map) is a popular tourist city in the Valencian Community of Spain. The city has become a hub of tourism directed to the beaches of the Costa Blanca.

The *Costa Blanca (literally meaning “White Coast”) is over 200 kilometres (120 mi) of Mediterranean coastline. It extends from the town of Dénia (map) in the north to Pilar de la Horadada (map) in the south. Benidorm (map) and Alicante are the major tourist centres.

Amongst the most notable features of the city are the Castle of Santa Bárbara (map) and the port of Alicante (map). The Santa Bárbara castle is situated on Mount Benacantil (map), overlooking the city. The tower (La Torreta) at the top, is the oldest part of the castle.

The promenade Explanada de España (map), lined by palm trees, is paved with 6.5 million marble floor tiles creating a wavy form and is one of the most lovely promenades in Spain. The Promenade extends from the Port of Alicante to the Gran Vía and ends at the famous statue of Mark Hersch. For the people of Alicante, the promenade is the meeting place for the traditional Spanish paseo, or stroll along the waterfront in the evenings.

Barri Vell – Santa Creu (map) is a colourful quarter of the old city, situated on the south-west of Santa Bárbara castle. Its small houses climb up the hill leading to the walls and the castle, through narrow streets decorated with flags and tubs of flowers.

Basílica de Santa Maria (Basilica of Santa María, map). Begun during the 14th century on top of the remains of an old Moorish mosque, construction was completed in the 16th century, and incorporates Gothic and Baroque stylistic elements in its structure.

Just a few kilometers from Alicante on the Mediterranean Sea lies *Tabarca island (map). What was once a haven for Barbary pirates is now a beautiful tourist attraction.

Tram Alicante connects passengers with the north of the province and with the University of Alicante.

+ Public transport in Alicante (alicanteturismo.com) • Getting around Spain (spain.info)